Solar flares emit hard X-rays that indicate, via bremsstrahlung, the presence of high-energy electrons. We know (and the RHESSI data copiously confirm) that the acceleration of these electrons somehow absorbs a large fraction of the total flare energy. This energy appears during the impulsive phase of the flare. At the same time that the spectacular flare loops form in the corona, an even more spectacular coronal mass ejection may appear.

The impulsive-phase particle acceleration follows a specific and well-defined pattern of spectral evolution (see the past nugget Late-phase particle acceleration). We call this the "soft-hard-soft" morphology, because during each peak of emission the hard X-ray spectrum, and hence the parent spectrum of the high-energy electrons, shows a local maximum of "hardness" - i.e., the spectrum is flattest at times of peak flux. The theoretical implications of this morphology may or may not be profound, but they obviously reflect features of the largely unknown particle acceleration and transport mechanisms in the solar coronal magnetic fields.

In this nugget we discuss one of the new morphologies that RHESSI is now exploring. An alternative "soft-hard-harder" spectral evolution was noted in exceptional cases from the earliest hard X-ray observations, and Alan Kiplinger showed in 1995 that this hard X-ray signature anticipated the occurrence of a CME and high energy proton events, a most important element of space weather which affects our environment on or near Earth.

Often enough the impulsive-phase morphology is all that you see in a solar flare, and indeed the RHESSI (and earlier) data show that this property characterizes the weakest observable microflares as well as major events. In the soft-hard-harder morphology one sees a steady spectral hardening superposed on this pattern, as shown in the figure below. Usually it has a smooth time variation, but it may also show a bursty character. In rare extreme cases one may only see only the soft-hard-harder pattern. 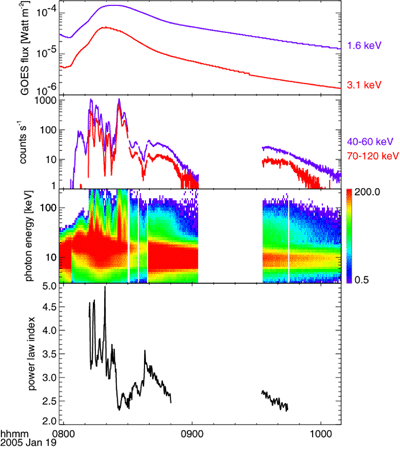 Figure 1. An illustration of two spectral morphologies seen in the RHESSI observations of a flare hard X-ray burst on January 19, 2005. The initial spikes follow the soft-hard-soft pattern, while the later phase shows a soft-hard-harder pattern. The bottom panel shows the spectral index (small is hard) and the next-to-bottom panel shows the RHESSI spectrogram (see a previous nugget for a description of the RHESSI spectrogram)

The active region producing this flare had several other major events (seven X-class flares during its disk passage) that we hope to describe further in future nuggets. They showed various degrees of the "pure" soft-hard-soft pattern and the "late phase" soft-hard-harder one.grid

Where are the sources?

Of course with RHESSI we can image the sources, and it's immediately interesting to ask whether or not the late-phase image morphology differs from the impulsive phase. We were surprised (though Qiu et al. 2004 had already pointed this out for an event observed by Yohkoh) to find that the images during the two different phases look quite similar, as shown below: 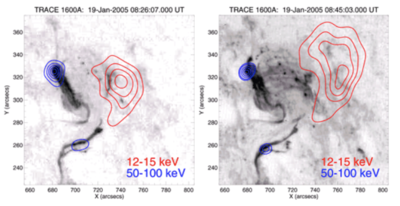 The late phases of solar flares sometimes show a quite different spectral morphology; this is associated with radio type IV bursts and with CMEs and reflects the acceleration and trapping of high-energy electrons in solar loops. The image morphology is not all that different from that of the impulsive phase, but clearly we are seeing different patterns of particle acceleration and propagation (trapping) in these loops. Note that the particle acceleration near the Sun has thus been confirmed to continue long after the impulsive phase. This is important because it cannot be readily explained by the well-established concept of shock acceleration of solar particles.