M is for Magnifique Part Deux

In this nugget, we continue our analysis of the M class flare of October 16th, 2010 (SOL2010-10-16T19:12) which we have previously discussed in a past Nugget. In that Nugget, we introduced AIA on [1] and discussed how SDO can be used to compliment RHESSI observations. We also pointed out a traveling disturbance propagating away from the flare site at great speeds. In this Nugget, we'd like to look a little closer at this phenomena and introduce some new tools to investigate similar behavior in the future. 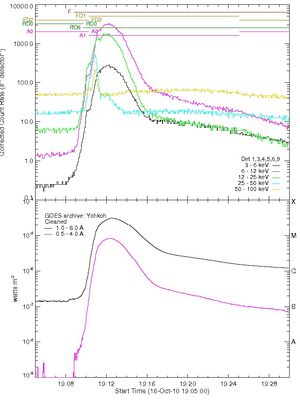 Figure 1: RHESSI and GOES lightcurves at select wavelengths during the SOL2010-10-16 flare.

Radio observations are a sensitive method for observing accelerated electrons in the corona. Both flares and coronal mass ejections CMEs have their associated coronal radio emissions. For flares, it is often type III radio bursts which are thought to be the product of accelerated electrons escaping the lower solar atmosphere. They are observed as impulsive emission rapidly drifting to low frequencies (i.e. density) from high frequencies (i.e. density). Type II radio bursts are thought to be associated with traveling shock waves and are therefore frequently associated with CMEs. They are observed as radio emission "slowly" drifting downward in frequency. Figure 2 shows the radio spectrum observed by the Green Bank Solar Radio Burst Spectrometer (GBSRBS). Both types of radio emission are observed here. Assuming a density model, it is possible to estimate the travel speed of type II producing shock. In this case, the travel speed was found to be approximately 950 km/s. This value matches well with the travel speed of the traveling disturbance observed by AIA as mentioned in the previous Nugget. So perhaps, though other observatories (specifically coronagraphs) did not observe a CME, AIA did. 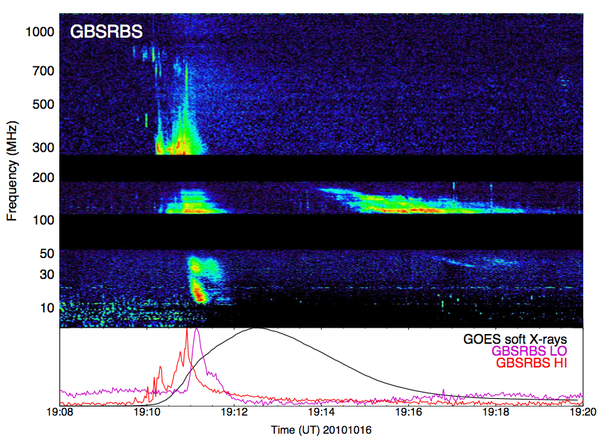 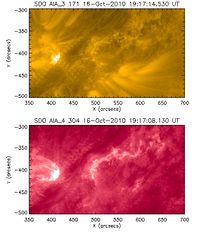 Figure 3: An elongated ribbon structure to the solar west of the flare site, visible in 17.1 nm and 30.4 nm.

To study the morphology of this flare we introduce the method of cross-correlation mapping. This procedure is designed to uncover correlations between different portions of an image series.

In this way we create two types of map. First, a map showing the level of correlation for a particular lag, and secondly a map showing the lag corresponding to the maximum correlation. We can use this method as a qualitative measure of the propagation of a disturbance along the structure.

We choose a master pixel located in the bottom-left corner of the ribbon structure. In multiple wavelengths, we can see the difference in the speed of propagation of heating along the structure as the energy from the main flare is deposited. In both 17.1 nm and 30.4 nm there is, on average, a considerable delay from the heating at the master pixel from the heating onset at the far end of the structure, a delay of over a minute for some pixels (see Figure 4). However, it appears that the propagation of this disturbance is slower in the 30.4 nm channel than in 17.1 nm channel. In principle we can use this method to measure the different propagation speeds of plasma at different temperatures and parts of the atmosphere.

Figure 4: Cross-correlation lag maps of AIA image cubes in the 17.1 nm, 30.4 nm and 160 nm bands. The 'master pixel' is located at approximately (495,-400) arcseconds in all cases. In general, the structure tends towards the red end of the spectrum the greater the distance from the origin point, indicating significant travel time. There is also a distinct instrumental interference pattern generated from saturation at the main flare site, particularly noticeable in the top left of the map in the 30.4 nm band.

This flare is curious in that the global wave detected by AIA and the radio data from GBSRBS are both suggestive of the presence of a CME, yet none was detected. Hence it is not certain what physical feature the Type II radio burst is associated with. This flare is also fascinating because of the effect it has on the neighbouring plasma structure to the solar west. Thanks to AIA, this structure represents a seismology opportunity, as it can be studied at multiple depths and temperatures. While we have begun this process with our qualitative correlation mapping, it should be possible to gain more quantitative results.

Manuela Temmer was kind enough to email the authors with evidence of a weak CME from this source region as observed by STEREO B COR1. The authors would like to apologize to the readers for this oversight and thank Manuela for taking the time to correct us!