Mars Odyssey may be little-known to solar physicists, but its HEND (High-Energy Neutron Detector) readily detects solar flares. Generally, flare observations are performed from the Earth or near-Earth orbits. However, there are space missions that operate at various ecliptic longitudes and latitudes in interplanetary space; these can provide different vantage points for solar observations. HEND recorded hard X-ray and gamma-radiation from 40 keV to 2 MeV (Ref. [1]), as a part of the Mars Odyssey mission, and observed solar flares from the middle of 2001 up to 2011. The main working parts of HEND comprise an outer scintillation counter of CsI (energy band from 40 to 1000 keV) plus an inner plastic one, (Stilbene) for the range 300 – 2000 keV. Two types of data are available: the time profiles from the outer and inner scintillators with a resolution of 0.25 s (near 80 keV) and 1 s (near 330 keV) respectively, and spectral data with a resolution of 20 s in 15 energy channels from both scintillators.

The HEND observations of flares on the visible hemisphere basically just supplement the data obtained by other missions on near-Earth orbits, but they may fill in vital gaps in these data. Figure 1 shows an example of a flare observed by both HEND and RHESSI. 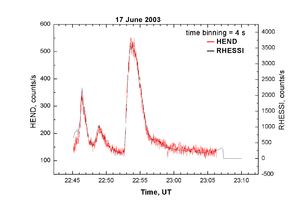 We are particularly concerned with HEND data on energetic solar flares for which the RHESSI or other observations happen not to be available. This routinely happens, of course, because roughly half of all flares occur on the invisible hemisphere of the Sun; there is a good chance that a deep-space mission such as Mars Odyssey can have them in sight. An example of such an event was a flare of 27 October 2002, which was fully on the invisible side of the Sun, and we illustrate this in detail in Figure 2. Whereas GOES recorded only a very faint flare at this time, HEND observed an enormous flare that was one of the largest in Cycle 23. This follows from fact that its maximum flux at 100 keV was comparable with that from the great flare SOL2001-08-25T16:30, while its duration in this energy range was several times longer. However, the flare under discussion was weaker than the very powerful flare SOL2003-10-28. It is clear the flare of 27 October 2002 occurred behind the solar limb. But how far? NOAA active region 10180, where the flare probably, occurred, had passed the central solar meridian on November 6. The locations of the Earth and Mars suggest that the flare was 42 degrees behind the east limb, as seen by an observer on the Earth. For Mars Odyssey, it was on the solar disk near the west limb. 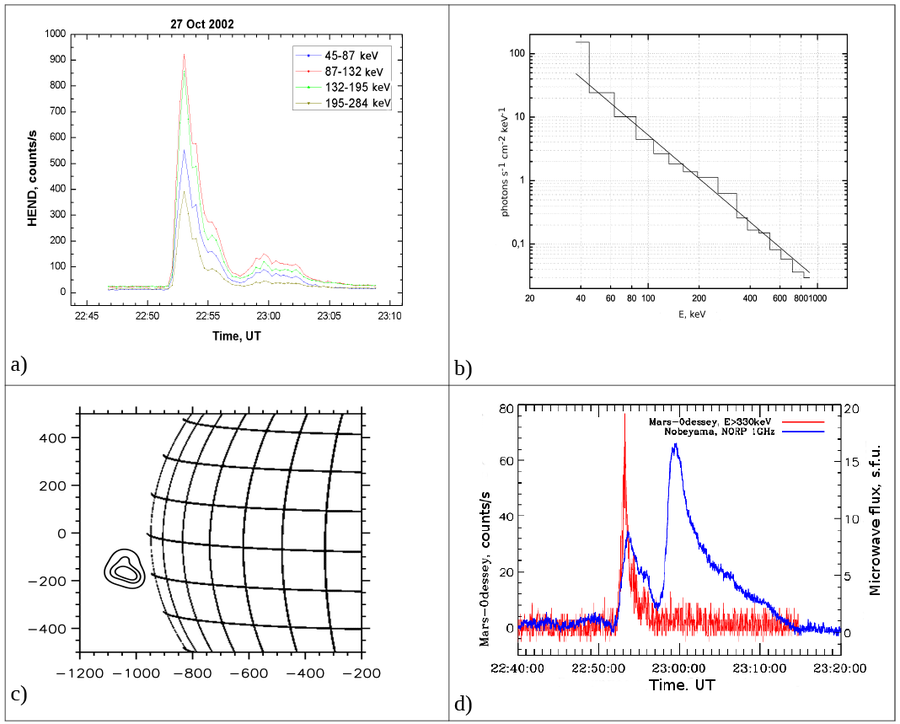 Figure 2: A flare (SOL2002-10-27) fully on the invisible hemisphere, but perfectly visible to HEND. (a) Spectral time profiles from HEND; (b) spectra integrated for one minute near the maximum of the event; (c) soft X-ray source (6-12 keV) appearing over the solar limb as observed by RHESSI; (d) comparison with Nobeyama radio observations: red line, the HEND inner scintillator; blue line, the time profile at 1 GHz from Nobeyama.

The main burst in hard X-rays lasted about three minutes (Fig. 2a). We have used the HEND data to construct the emission spectrum in the range 40-900 keV at the maximum of the event. This spectrum is a very good fit of the power-law function (Fig. 2b), which indicates a nonthermal source. A previous analysis of this event has already appeared in the literature (Ref. [2]), and we have carried out a similar analysis ([3]) but now using both the RHESSI and HEND data. However, the conclusions from our analysis are somewhat different. RHESSI recorded an SXR source over the eastern limb at the same time (fig. 2c). Since the brightness of this source must decreases symmetrically, we consider it to be a coronal source in the tangent plane to the photosphere, at an altitude of about 30,000 km over the photosphere.

The time profiles of the gamma and decimetric bursts are compared in fig. 2d. The first radio and gamma bursts are almost simultaneous. It should be noted that the SOHO/LASCO C2 coronagraph recorded a very fast halo-type coronal mass ejection (CME) at 23:26 UT, which nearly filled the entire southeast quadrant. The CME velocity was 2100 km/s, increasing slowly after the appearance from behind the limb. The results of the analysis we have carried out can be understood to a rough approach within the framework of the following probable assumptions: (i) The HXR radiation recorded by HEND came from the loop footpoints; (ii) the electron spectrum that generated this radiation can be calculated from the thick-target model; (iii) some of the accelerated electrons were trapped by the large-scale loops connecting the flare region with the SXR source above the eastern limb as observed from the Earth; (iv) the trapped electrons were penetrating mainly along the loop generating the bremsstrahlung radiation. With these assumptions the electron flux at the source over the limb recorded by RHESSI can be calculated from the thin-target model. We estimate the plasma density at 30,000 km above the photosphere to be 109 cm-3. This results in an estimated flux of accelerated electrons in the corona to be about 300 times smaller than the number in the lower atmosphere, i.e. at the source of acceleration. The interpretation of the second radio maximum of the October 27, 2002 flare is not unambiguous. However, the analysis of similar events gives us reason enough to believe that the second maximum is associated with the appearance of a hydrodynamic disturbance (EUV wave) from behind the limb.

After a powerful flare on the back side of the Sun, a sudden flux of accelerated electrons appeared high in the corona, and was followed in several minutes by a hydrodynamic disturbance come to the plane of the sky. These new types of source can be observed from the Earth in the SXR and radio bands, and can help us identify many events with unknown localization. When the accelerated electrons penetrate the lower corona, their spectrum becomes softer and the flux weakens. Since the electron beam characteristics at both ends of the loop are known from observations, one can study how the accelerated electrons penetrate the lower corona.

[3] Observation of the powerful solar flare of October 27, 2002 on the far side of the sun