Hard X-ray (HXR) sources produced by electrons accelerated during solar flares are our best investigative tool for probing the properties of the radiating electron distribution. These HXRs are emitted via bremsstrahlung and their linear polarization (a natural consequence of Compton scattering should directly tell us about the anisotropy of the radiating electron distribution, hence helping to constrain models of electron transport and acceleration. Linear polarization measurements from a dedicated X-ray polarimeter may allow us to determine the anisotropy of the radiating electron distribution from a single flare, without the need for two spacecraft or assumptions made by statistical surveys etc. While in theory this is a great method, measuring HXR polarization successfully through the years has proved to be a difficult task.

All linear polarization measurements to date have been single measurements across the entire HXR source, but what would spatially resolved polarization measurements across a single HXR source add to this? If we had imaging polarimetric data, would it prove useful? If all HXRs from the source were directly observed after bremsstrahlung from an isotropic electron distribution function, then the answer would be "no." But all sources sitting at height h above the photosphere, up to ~100 keV, must consist of two components; the directly emitted bremsstrahlung component and a backscattered albedo component created by Compton backscattering in the photosphere (see nuggets Nugget #130, Nugget #119 and Nugget #42). It is the existence of this albedo component, particularly present over peak energies of 20-50 keV, that motivates the need for and the usefulness of spatially resolved polarization measurements. Without the albedo component, this would prove to be a rather pointless task since only albedo provides a variation in polarization across the source. This is a useful property, not just for albedo detection but for determining photon directivity. 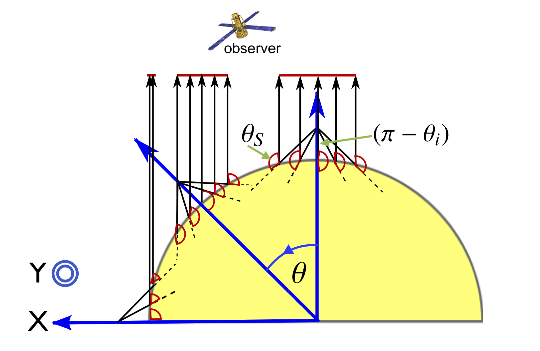 Albedo produces a distinctive polarization pattern across an HXR source, changing both the degree of linear polarization (DOP) and the direction of polarization Ψ. Figure 1 shows a simple cartoon of three HXR sources at different positions above the solar disk. To understand the pattern, take the easiest example of an initially isotropic and unpolarised HXR source sitting exactly above the solar centre and examine the DOP pattern produced across the albedo patch in the photosphere due to Compton scattering.

The largest changes in DOP occur when the scattering angle is equal to 90 degrees and no changes occur for scattering angles of 0 degrees and 180 degrees. Photons scattered from the edges of the albedo patch towards the observer have scattered at angles closer to 90 degrees, producing the largest change in DOP and in this case the DOP of the outgoing photon beam heads towards 100 %. Photons directly below the source have had to scatter at angles close to 180 degrees to reach the observer, which causes no change in DOP (i.e. 0 % in this case). Hence, we get this increase in DOP from 0 % and tending towards 100 % as we head out to the edges of the source. This pattern emerges at other source locations but is altered slightly due to projection effects (Figure 2). In Figure 2, we can also see that albedo produces a distinctive pattern in the direction of polarization Ψ, which sits at an angle tangential to the line connecting the observed point on the source and the source centre.

We used Monte Carlo simulations to study spatially resolved polarization due to albedo and input photon distributions into our simulations created from three different electron directivities; from the near isotropic to a highly beamed distribution, labelled 1-3 respectively in the animation shown in Figure 4 . For each of these distributions we used a source height of 1.4 ' ' above the photosphere and a source size of 5 ' '. The resulting polarization maps for the near isotropic distribution over the energy range of 20-50 keV are shown in Figure 3. Although the DOP and Ψ patterns for each source at different points on the solar disk for a single distribution are very interesting, the observationally useful information comes from the changes at a single location due to varying photon (and electron) directivity.

In Figure 4 we take a chosen mid-point location at cos(heliocentric angle) of μ~0.80 (or a source at ~542 ' ' central distance), and view the changes across DOP and direction of polarization Ψ in the radial direction of the source through Y=0 ' ', for three different photon distributions. Firstly with spatially resolved polarization, we have two quantities to work with. This has the advantage over a single entire source polarization measurement already; where we only ever get directivity information from the DOP. Secondly, we see distinctive changes in both of these quantities across the source with increasing photon directivity. At the side of the source closest to the disk centre, we see that the DOP falls with increased photon beaming while the direction of polarization Ψ roughly remains at 90 degrees. On the limb-side of the source, we see that the DOP increases with photon beaming and Ψ decreases with photon beaming. Not only are these results useful, they also require no manipulation, i.e. there is no need to worry about separating the primary and albedo components - these are now used together as one measurement to determine the photon anisotropy. 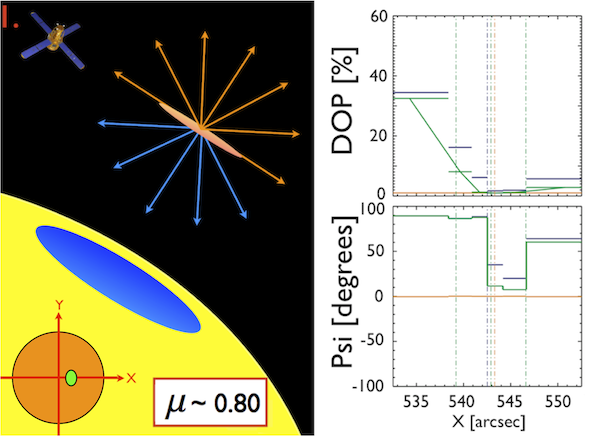 Figure 4: Click here to view the animation. Animation showing how the spatially resolved DOP and direction of polarization Ψ change with increasing photon (electron) anisotropy for a source sitting at one disk location of μ ∼ 0.80. Labels 1-3 indicate increasing photon anisotropy from near isotropic to a highly beamed distribution towards the photosphere. Orange=primary source, Blue=albedo source and Green=total source.

In conclusion, spatially resolved polarization could provide us with an effective method of determining the directivity of the radiating electron distribution, if and when in the future we have the instrumentation available to make reliable and sensitive polarization measurements. Our full results are shown in Jeffrey & Kontar (2011) [1].

This work was financially supported by STFC and SUPA.