Using the search capabilities of the Solar Flare Finder widget outlined last week, we can now do a retrospective analysis to see how effective our coordinated observations - either planned or serendipitous - have been during Solar Cycle 24. We consider the first 6.5 years after SDO was launched (1 May 2010 to 31 Oct 2016), which encompasses the peak of Solar Cycle 24 as shown by the vertical dotted lines in Figure 1. 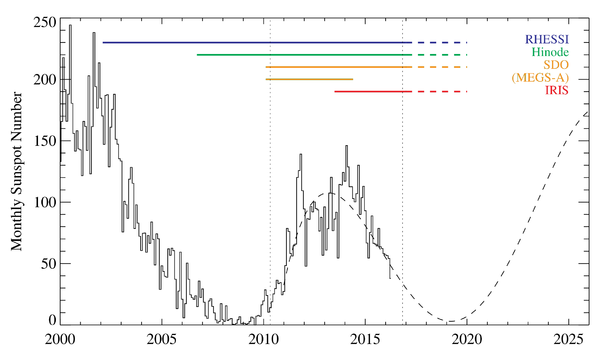 First we shall take a look at how instruments performed individually. Table 1 shows the breakdown of flares listed in the SSW Latest Events catalog (by class) observed by each instrument. Note that MEGS-A had a 100% duty cycle up until 26 May 2014 when it suffered a power anomaly. Similarly, IRIS was only launched on 27 June 2013 so only flares after this date (in parentheses) were considered.

Table 2 shows how many flares (of all classes) were observed by various combinations (degree) of instruments. Again note that all 7 instruments were only operational together for 11 months, and the number of flares duration this time are given in parentheses. From this we can calculate that - on average - each flare was observed by 2.4 instruments.

To help visualize these relationships we have used UpSet (Ref [1]), a novel tool for visualizing intersecting datasets. This type of plot enables the efficient visualization the common elements of a large number of sets (the more common and the familiar Venn diagram approach produces ineffective visualizations). The left-hand panel of Figure 2 shows the intersections of the various combinations of dataset ordered by decreasing frequency (i.e. the most common combinations are on the left and decrease towards the right). The right-hand panel shows the same information but now ordered by increasing degree (i.e. flares observed by individual instruments alone come first, with flares observed by all seven on the far right). In each figure, the total number of flares observed by each instrument are given by the horizontal black bars in the bottom left corner. The dots connected by lines at the bottom of each figure denote the combinations of instruments considered, while the histograms above give the number of events corresponding to a given combination. The most common combination of flare datasets was RHESSI+MEGS-A+Hinode/XRT (930 flares), due to their large fields of view and high duty cycles, while only 3 flares out of 934 were simultaneously observed by all 7 instruments.

Figure 2: UpSet plots of the intersection of flare datasets from each instrument as ordered by decreasing frequency (left) and increasing degree (right; zero elements sets not included).

The paucity of events co-observed by multiple, complementary instruments points to the challenge of observing solar flares in flagrante delicto. Without a reliable method of predicting when and where a solar flare will occur, we are left with trying to optimize instrumental resources in the face of incomplete information as well as each instruments' operational constraints and competing scientific priorities. This is worth bearing in mind as we approach Solar Cycle 25, and the advent of some powerful new facilities: the Daniel K. Inoue Solar Telescope, Solar Orbiter and Solar Probe Plus.

Ryan Milligan is currently an Ernest Rutherford Fellow at the University of Glasgow.