A recent series of solar flares and coronal mass ejections CMEs from NOAA active region 12087 (central meridian passage June 15, 2014) has included three more X-class events and some interesting patterns of behavior that we discuss here. This activity brings the total number of X-class flares to 34 for this cycle.

This flaring activity brings questions about flare/CME initiation. Among these questions we note two particular phenomena. First, the association of CME eruptions with impulsive flares that distinctly do not fit the pattern of the standard development (see, for example, Nugget 226). These fast CME events are not "long duration" or "long decay" events (LDEs; see Ref. [1] for a description).

The second curiosity is the apparent doubling-up of energetic events. Normally we think of flare build-up as a gradual process, but this active region once again clearly demonstrated that we can't really be sure about this: the two X-class flares SOL2014-06-10T11 and SOL2014-06-10T12 were only about an hour apart, with X-ray source regions (and also flare ribbons) located only a few Mm away from one another.

Figure 1, a standard RHESSI-orbit GOES plot from the RHESSI Browser illustrates both of these curiosities with the two X-class flares of June 10. The imagery of these events clearly shows that they originate close to one another, and that they both result in CME eruptions. As the light curve in Figure 1 shows, the first flare is extremely impulsive and that event shows no hint of bright arcade development as predicted by the reconnection models; the second event is longer in duration and does include an arcade. As Browser further shows, this second event also drove a type II burst and produced gamma-ray emission. 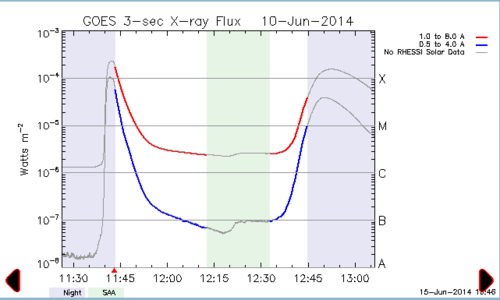 Figure 1: Standard GOES plot for one RHESSI orbit, about 96 min, showing the two X-class flares of June 10, 2014. From the RHESSI Browser for convenience.

It is certainly well-documented that CMEs and LDEs often go together, and this has been a powerful argument in favor of the large-scale reconnection model of flare development. This paradigm is so attractive that there is relatively little theoretical work on flares that are not eruptive, or appear as "failed eruptions" or "simple loop flares." Neither of these would naturally form a large-scale current sheet in which magnetic reconnection could return some of the energy involved in the eruption, but of course by far the great majority of flares are not eruptive.

The LDE/CME association has always appeared as a statistical one, and in that sense it may not be surprising that some extreme examples of non-LDE CME events will appear. Anecdotally (since we're unaware of any rigorous analysis on this topic) CMEs from non-LDEs, such as the first X-class flare in Figure 1, have perhaps appeared more frequently during this activity cycle than in previous ones. This might be expected from the possible environmental influence of the larger-scale corona, even in a global sense, on CME initiation in a weaker cycle. The currently popular torus instability (Ref. [3]) model is an example of a related theory.

We conclude that the LDE character of a flare is neither a necessary nor a sufficient condition for CME occurrence, and that there is very likely to be some important physics omitted from models of CME initiation that embrace the idea of large-scale magnetic reconnection and arcade formation.

Nests of Activity and Duplicity

The proximity of the two X-class flares on June 10 raises another interesting simple question. How can a catastrophic event involving the restructuring of the corona of an active region, such as the first flare of this pair, not have destabilized the adjacent part of the region that will flare shortly thereafter? How could it have been nearly ripe for eruption in a state approaching marginal instability, and not been "triggered"? We show how close these two flares were in Figure 2, and discuss even closer pairs below.

Figure 2: The two X-class flares of June 10, 2014, shown during their impulsive phases by AIA 171 A images. Each frame shows the other flare's brightening as a contour; the earlier flare was so compact that both footpoints are concealed behind its saturation bleed. Field of view 153 arcsec by 153 arcsec.

Is the appearance of pairs of flares ("duplicity") physically meaningful? The two X-class flares of June 10, separated by only one hour, were followed on the next day by a similar pair (X and M) and perhaps another pair of M-class events. We have used the RHESSI quick-look flare locations to study these pairs of flares, with the result in Figure 3 suggesting that no, there is no pattern here, or at least none that a cursory glance can detect. Again we are unaware of any rigorous study of a flare "k-omega diagram" analogous to the ones that show solar p-mode oscillations so dramatically. However, Figure 3 does remind us of the "nests of activity" described in Zwaan's review (Ref. [2]); sunspots and flares do tend to bunch up, which is a manifestation of persistent emergence of new flux in the standard flare build-up scenario.

Figure 3: Locations of HEK flares in AR 12087 during four days (June 10-13, 2014), with lines linking the apparent pairwise occurrences. The units here, solar degrees, correspond to distances of some 12 Mm. The June 10 X-class flares are the pair on the right, with extreme uncertainties in E-W position (but not N-S position) due to their limb location and the certainty of major projection effects The heliographic longitudes in this plot have been rotated to an arbitrary reference time (the first X-class flare).

There are some seldom-mentioned features of flux emergence and CME initiation that AR 12087 has illustrated well for us: CMEs launched without loop arcade systems resulting; apparently unstable regions not erupting; and possibly duplicity. The analysis here is very preliminary, since nobody will have written a paper yet about these recent events, but we hope that somebody does follow up on these tentative ideas.

[2] "Elements and patterns in the solar magnetic field"