Small flare events with not too complex signatures of (flare-energized) nonthermal electrons in dynamic radio spectral diagrams give us an opportunity to identify elementary processes which are regularly hidden in complex large events. We therefore have studied several selected microflares imaged in hard X-rays by RHESSI and detected at Astrophysical Institute Potsdam (AIP) with its radio spectrometer during a special SOHO-MDI campaign for the measurement of the magnetic field at high resolution (in Active Region 10465 on September 26, 2003). Here, we present a single event which occurred at 12:04-12:09 UT and is characterized by simultaneous meter wave radio burst of an interesting type.

Figure 1 shows an overview of the event in the radio and hard x-rays (15-20 keV). The x-ray light curve suggests a sequence of two enhancements, with the second one starting roughly during the maximum of the first (at 12:05:15 UT). The red curve is the solar radio flux (314 MHz with a bandwidth of about 2 MHz) of the event observed. The curves are plotted with arbitrary intensity scaling. The red curve coincides on average well with the first HXR pulse. Fig. 2 shows the radio spectrum, with a red arrow points at the narrowband enhanced emission at 314 MHz. The HXR burst is accompanied by several faint type III bursts with the strongest one at 12:05:38 UT (blue arrow). The narrowband radio emission decays during the second HXR enhancement, the blue arrow points in Fig. 1 at the type III burst at 314 MHz. The correlation between the radio signal and the first HXR enhancement, together with the smooth time profile of the flux curves, confirm the solar origin of the radio signal. Narrowband man-made disturbances appear in a different manner in the spectra (e.g. Fig. 2 right at 340 MHz). The question arises how to understand the very different association between the radio and the HXR signals during the event.

The RHESSI spectra for both intervals of the HXR curve are not much different. The 3-8 keV range expresses thermal emission. Radiation with energies above 12 keV is nonthermal bremsstrahlung during both bursts. The electron precipitation rate during the second burst is 70 % of the 1.1x1035 s-1 of the first pulse. The first pulse can well be imaged in the energy range 12-25 keV (Fig. 3, left), the second pulse yields a source image in 3-8 keV, only (Fig. 3, right). The HXR flux isolines are superposed on TRACE 1600 Å continuum maps of the microflare site. The SOHO-MDI magnetogram of AR 10465 (Fig. 4) identifies the part of the TRACE image underlaid in Fig. 3 as situated between the large spots.

The 12-25 keV map (first pulse) shows a source with two maxima roughly situated at two UV flare brightenings. They are part of the flare ribbons with NE-SW inclination coincident with an inverted S-shaped EUV loop visible during the flare onset (see the TRACE 12:04:54 UT image in the coronal 171 Å coronal emission line, in Fig. 5). In the 3-8 keV range, only the outer HXR isoline (20 % of the maximum level) encloses the whole southern flare ribbon. According to the isoline plot in Fig. 3 the HXR source centroid is situated in a magnetic loop with a footpoint spacing of about 13 arcsecs.

Figure 5: TRACE 171 Å (top line) and 1600 Å (middle line) selected snapshots before, during, and after the impulsive flare phase (from left to right). In the middle column, arrows point at the same features in the different spectral ranges. In the top line (hot coronal loops seen in projection) note the transition from a small flare to a more extended postflare sigmoid. Right bottom shows HXR isolines overplotted (see also Fig. 3).

Lets now assume that the source of the narrowband radio signal and the HXR source centroid are cospatial. If we take the HXR footpoint extent as the source height (9.5 Mm), we obtain the plasma frequency of 314 MHz (the frequency of the observed narrowband feature, Fig. 2) in that height with an only slightly enhanced coronal density model. This is no surprise - we discuss a microflare, and the observed active region AR 10465 is comparatively simple structure that should correspond to only a small density enhancement over quiet-Sun coronal conditions. Recall that the plasma frequency is a characteristic parameter determined by the square root of the electron number density; in a gravitationally structured atmosphere no radio signal with a lower frequency can escape from that level. 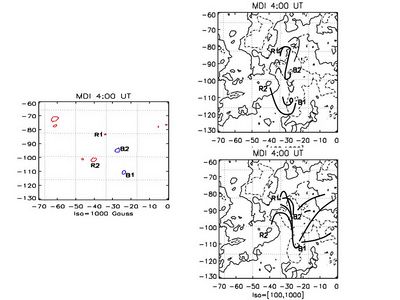 In a next step we select from the potential field extrapolation of the MDI magnetogram (Fig. 4) those field lines with at least one footpoint in the 1600 Å flare brightenings touched by the HXR isolines and having turning point heights underneath 20 Mm. Because we consider the potential field these lines should correspond with at least some of the postflare brightenings in the corona (Fig. 5, TRACE 12:20:57 UT at 171 Å). That is evidently the case.

Comparing in Fig. 5 the flare- and postflare configuration of bright loops we notice that the change of the field structure due to the flare is dramatic. The small inverted S-shaped loop is drastically elongated and has a new footpoint in the southern flare brightening. The preflare loop structure disagrees with the potential field extrapolation - in contrast with the coronal postflare loops - compare TRACE 171 Å, Fig. 5 top right with the field lines shown in Fig. 6a, lower right configuration. It is interesting to see that almost no magnetic field lines in the height range 20-50 Mm cross the relevant part of the active region (Fig. 6b, green arrow). If we consider the >1000 Gauss flux concentrations in the magnetogram, only, we find that the microflare is determined by four dominant regions R1, R2 and B1, B2 (compare Fig. 6a with Fig. 7) - a quadrupolar field configuration.

Such photospheric magnetic flux arrangements are quite a usual flare environment and were already noted by others. The comparison between the bright coronal loop structures before and after the flare (Fig. 5, top; schematic in Fig. 7) with the potential field extrapolation (Fig. 6) reveals that the energy source of the microflare must have been the non-potential state of the coronal magnetic field in the small part of the whole active region that we have studied. 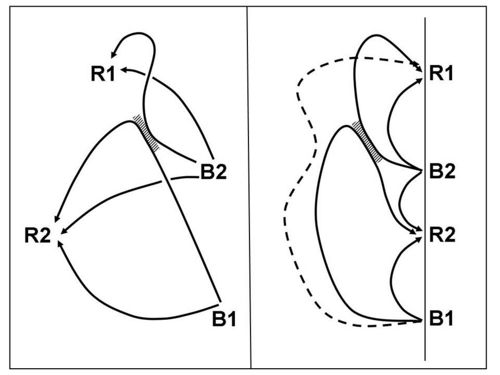 Figure 8: The simplified magnetic preflare situation in a top view (left) and a side view from the West (right). The flux concentrations >1000 Gauss are denoted as in Fig. 7. The shaded region denotes the flare current sheet; dashed is a just reconnected part of the field which is not plotted in the top view, for simplicity.

Based on Figs. 5, 6, and 7 we present a simplified top and a side view (from the West) on the flaring active region in Fig. 8. This scheme illuminates the transformation from the flare to the postflare magnetic field configuration. A shaded area represents the site of the HXR source centroid (or a region above it - we do not know the correct height of the X-ray source) where we also expect the site of the narrowband radio emission during the first HXR pulse. The dashed field line is a newly formed one (skipped in the top view, for simplicity), and represents the transition from the small sigmoid in Fig. 5, 12:04 to the large sigmoid, 12:20 UT.

The presence of an isotropic ensemble of accelerated electrons at the loop top leads to the trapping the particles with mainly perpendicular motions in this region. The field-aligned particles start to bounce and precipitate into the loop footpoints. If the density and magnetic field changes are small near the loop top, the nonthermal electrons can be the source of the narrowband radio emission while the precipitating electrons lead to the HXR footpoint emission. From the absence of radio emission during the second HXR pulse we argue that the magnetic structure which guides the energetic electrons has been disrupted between the first and the second HXR peak. The occurrence of type III bursts near the beginning of the second HXR enhancement supports this assumption. A second possibility to induce the different association between the signals from both spectral ranges is a change from isotropic to quasi-parallel electron acceleration near a magnetic branch point (path to the HXR footpoint sources, and type III radio burst emission, respectively). In both cases the narrowband radio source is spatially near to the electron acceleration site.

If the narrowband radio emission during the first HXR pulse is a signal coming from the dashed region in Fig. 8 the radio source site is near to the microflare current sheet. The radio emission can be nonthermal gyroresonance emission in a magnetic field of about 55 Gauss, the surrounding plasma frequency is about 270 MHz. The magnetic field strength estimated from the radio effect is more than 50 % below the average postflare (potential) field strength in the source height range. This is an additional argument for the assumption that the observed effect is a diagnostic of flare current sheet parameters.

An important finding of this work is the evidence of the solar origin of the narrowband radio feature. The result is of special interest because comparable narrowband features have also been observed in several more complex radio spectra of stronger events during the impulsive phase, too. A detailed and better founded radiophysical interpretation of the observed "radio line" is outside of the scope of this work.