Measurements of solar-flare neutrons, along with measurements of other flare emissions, are important diagnostic tools for understanding the flare process in general and ion acceleration in particular. There have been several RHESSI Nuggets written about detections of neutrons from solar flares (e.g. A, B, C). In this Nugget we discuss the physics of neutron production, and describe comparison of neutron calculations with measurements can be used to learn about ion acceleration in solar flares.

In the standard solar-flare model (Ref. [1]), electrons and ions are accelerated somehow via [magnetic reconnection], probably near the tops of closed coronal magnetic loops. These particles travel down the loop legs and interact with material at the loop footpoints. Nuclear interactions of the ions then produce excited and radioactive nuclei, neutrons, and pions.

Neutrons are produced at mostly chromospheric densities (similar to excited-nuclei production) by numerous reactions of accelerated protons, 3He, and alpha particles (4He) with ambient H, He and heavier elements. For typical solar abundances and ion energy spectra, hundred-MeV neutrons are produced mostly by (1H,4He), (4He,1H), and (4He,4He) reactions. At higher neutron energies, proton-proton (1H,1H) reactions contribute significantly, while at lower energies, alpha reactions with heavy elements are important. Being neutral, neutrons travel in straight lines independent of the magnetic field. Free of the nucleus, a neutron decays radioactively with a mean lifetime of about 882 s, into a proton, an electron and a neutrino. 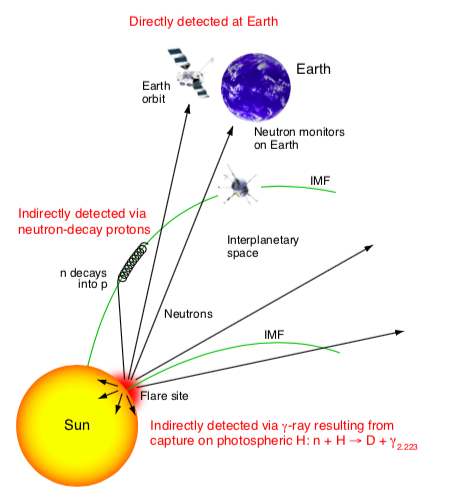 Figure 1: Neutron production in solar flares. IMF shows the typical spiral pattern of the interplanetary magnetic field, which guides charged particles but not neutrons (or photons).

Solar-flare neutrons can be detected both and directly and indirectly (see Figure 1). Some of the higher-energy (>30 MeV) neutrons that have initial directions away from the Sun can survive the transit to Earth and be directly detected with instruments in orbit and, for flares producing sufficient high-energy (>200 MeV) neutrons, with neutron monitors on the ground. Neutrons with energies >30 MeV have been observed at 1 AU from several large flares since the initial discovery (Ref. [2]). Recently, solar-flare neutrons have also been detected by a the neutron telescope onboard the International Space Station; see an earlier Nugget. For typical solar-flare ion spectra, the energies of the ions producing neutrons detectable at Earth are generally greater than about 100 MeV/nucleon

Lower-energy neutrons do not survive the transit due to decay and can only be directly detected with instruments in the inner heliosphere. For example, neutron-decay products can be detected by charged-particle detectors in space (e.g., Ref. [3]).

Neutrons having initial directions into the Sun may be indirectly detected because some of them can be captured on ambient hydrogen in the solar atmosphere, producing deuterium with the binding energy appearing as the strong gamma-ray line at 2.223 MeV. This line was among the first gamma-ray lines observed from a solar flare (Ref. [4]). Capture occurs after the neutrons have thermalized via scattering deep in the solar atmosphere (photosphere) where the high density favors efficient capture over decay. Although the neutron-capture line is intrinsically one of the strongest lines produced in flares, the deep capture results in significant attenuation of the line, particularly for flares occurring near the solar limb where the path-length to Earth is greatest. This is in contrast to nuclear deexcitation lines (such as 14C 4.44 MeV), which are produced at chromospheric densities resulting in little attenuation of the lines unless the flare is beyond the solar limb. The ion energies responsible for the neutrons producing the capture line are typically 10-50 MeV nucleon1. Higher-energy ions produce neutrons that are captured deeper in the photosphere, resulting in stronger attenuation, and so do not contribute significantly to the observed capture line. Lower-energy neutrons tend to decay rather than be captured.

The shape of the neutron kinetic-energy spectrum depends most significantly on the shape of the accelerated-ion energy spectrum. Figure 2 (left) shows calculated neutron energy spectra escap- ing the Sun (before losses due to neutron decay) from interactions of accelerated ions directed downward into the Sun having assumed power-law kinetic-energy spectral indexes of 3 and 5 at two flare locations on the solar disk as viewed from Earth: disk center and limb. While low-energy neutrons tend to be produced isotropically, higher energy neutrons tend to be emitted more in the same direction as the interacting ion, with this tendency increasing with increasing ion energy. As a result, escaping neutron spectra from disk-centered flares tend to be steeper than those from limb flares.

Comparing such calculated neutron energy spectra with measured spectra (corrected for neutron decay) provides a direct means for determining both the accelerated-ion energy spectrum at energies greater than about 50 MeV/nucleon and the number of accelerated ions required to produce the neutrons. When no spectral measurements are available, neutron-arrival time histories can still be used to obtain some spectral information: if the production duration (as implied by a measured hard X-ray or gamma-ray flux time history) is known to be short, the arrival times of the neutrons can be used to infer their energies via time-of-flight.

Ion spectral indexes derived from this ratio can be compared with indexes derived for different ion-energy ranges, providing ion spectral information across a wider energy range. For example, the flux ratio of the 20Ne 1.63 MeV and 16O 6.13 MeV deexcitation lines is sensitive to the ion spectral shape across the 2-20 MeV/nucleon energy range. This ratio is, of course, strongly dependent on the ambient (chromospheric) [Ne]/[O] abundance ratio. The SMM made measurements of this flux ratio from and the neutron-capture/4.44 MeV line ratio. These showed that the ion spectrum could be an unbroken power law across the full 2-50 MeV/nucleon energy range only if the ambient [Ne]/[O] abundance ratio is 0.25, significantly more than the accepted value of 0.15. Note that the chromospheric-photospheric [Ne]/[O] abundance ratio cannot be directly measured by other means. If the ambient [Ne]/[O] abundance is instead 0.15, the ion spectrum below ~20 MeV/nucleon must steepen, which would have a significant impact on the number of and the energy contained in low-energy ions accelerated in solar flares.

The neutron-capture line flux can also be compared with the pion-decay flux to determine the accelerated-ion spectrum shape at higher energies. In solar flares, pions are produced primarily by proton-proton and proton-alpha (and alpha-proton) interactions. The threshold energy for pion production is ~200 MeV for proton-alpha interactions and ~300 MeV for proton-proton interactions. The ratio of the neutron-capture line flux and the >100 MeV pion-decay flux is therefore sensitive to the accelerated proton spectral shape across the ~30-300 MeV/nucleon energy range. Figure 3 (left) shows this ratio calculated for several flare locations on the Sun as a function of the ion power-law spectral index. These curves can be used with measured flux ratios to determine the ion spectral index across the 30-300 MeV/nucleon energy range. The accelerated-proton spectrum above 300 MeV/nucleon can be determined by directly fitting measured gamma-ray spectra with calculations of the pion-decay spectrum whose shape is sensitive to the proton spectral shape. Combining deexcitation-line, neutron-capture line and pion-decay emission measurements allows the shape of the accelerated-ion energy spectrum to be determined across the broad energy range of 2 to >300 MeV/nucleon.

Because the neutrons thermalize before being captured, the neutron-capture line shape only reflects thermal broadening due to the photospheric temperature and is very narrow (<100 eV). The shape has no diagnostic value, in contrast to deexcitation-line shapes which depend on a number of flare parameters such as the accelerated-ion spectral shape and interacting angular distribution, and the accelerated alpha/proton ratio.

Compton-Scattering of the Neutron-Capture Line

Because neutron capture occurs deep in the solar atmosphere, both downward- and upward-directed photons can Compton-scatter once or several times before escaping. This attenuates the line flux and produces a continuum of photons at energies below the line energy. (This is in contrast to the de-excitation lines, which are produced higher in the atmosphere, and Compton scattering of only the downward-directed photons is significant.) Figure 3 (right) shows calculated photon spectra escaping the Sun from scattering of 2.223 MeV neutron-capture line gamma rays for several flare locations on the solar disk. This Compton continuum may be diagnostically useful in that it may still be detectable for flares beyond the solar limb while the capture line itself is not.