Just over a year ago RHESSI was swamped by radiation from the most powerful gamma-ray flare ever recorded, as described in this earlier nugget. The source, the Soft Gamma Repeater SGR 1806-20, is thought to be a magnetar - a neutron star with a super-strong magnetic field. As the field decays, local magnetic reconnection events power recurrent gamma-ray flares. The magnitude of the December 2004 flare - over 10000 times more powerful than normal - suggests that the field had reached a point of catastrophic instability.

The RHESSI lightcurve of the event (see Figure 2 below) shows a short, spectrally hard initial peak, followed by a softer decaying tail lasting a few hundred seconds. Pulsations with periods of several seconds are visible in the tail, and reveal the neutron star spin period. Their presence is thought to be due to a fireball of ejected plasma, trapped near the stellar surface by the strong magnetic field.

The magnetic field of a neutron star, unlike that of the Sun, is coupled to the charged particles in its crust. This means that a global reconfiguration of the field, of the type that powered the giant flare, could lead to large-scale crust fracturing. The resulting starquake may in turn excite global seismic vibrations. Terrestrial seismologists regularly observe such global modes after large earthquakes. Theoretical calculations suggest that a family of modes known as toroidal or torsional modes (which involve shearing rather than radial motions) should be the easiest to excite.

Figure 1: The surface patterns for two different toroidal modes. Colors and arrow lengths indicate the magnitude of the perturbations.

Prior to the 2004 flare only two giant flares had been seen - one in 1979 from SGR 0526-66, and one in 1998 from SGR 1900+14. Although there was tentative evidence for oscillations at the expected frequency during the 1979 flare, it was not until the 2004 flare that researchers really hit the jackpot. Analysing the tail of the flare using data from the Rossi X-ray Timing Explorer (RXTE), Gianluca Israel and his collaborators discovered a strong Quasi-Periodic Oscillation (QPO) at 92.5 Hz, with weaker features at 18 Hz and 30 Hz.

So why are these results so important? Well, if the interpretation is correct, they represent the first direct detections of vibrations in a neutron star crust. Because the mode frequencies depend on a host of neutron star properties, we may be able to use them to constrain things like the neutron star equation of state (set by the interior nuclear physics), the crustal breaking strain, and the magnetic field configuration. Given the potential payoff, we started to look around for data from other satellites to confirm or extend the RXTE findings.

RHESSI's microsecond time resolution makes it ideal for timing analysis of the 2004 flare, although a strong albedo flux component does degrade timing sensitivity for rear segment data. For this reason we used data from the front segments alone to search for the highest frequencies, and data from both front and rear segments to search for frequencies below 50 Hz. With the rear segments included, the RHESSI countrate actually exceeds that recorded by RXTE.

We knew from the RXTE results that the 92.5 Hz QPO was rotational-phase dependent. In other words, it appeared only at certain phases of the slow (7.6 s) pulsation associated with the magnetar's rotation. This implies that the oscillation was associated with a particular patch of the neutron star surface or magnetosphere. To search for high frequency oscillations we therefore folded together data from a number of rotational pulses, for the phases of interest, and computed power spectra. Power spectra were averaged to 1 or 2 Hz frequency resolution to account for the inherent frequency variability that makes the oscillations quasi- rather than strictly periodic.

In addition to the 18 Hz and 92.5 Hz QPOs identified previously, the higher countrate of RHESSI revealed another broad QPO at 26 Hz. We were also able to show that both the 18 Hz and 26 Hz QPOs appear at the same rotational phase (i.e. on the same part of the star) as the 92.5 Hz QPO. What about the 30 Hz QPO suggested by the RXTE data? Well, although there was a weak feature at this frequency, it was not strong enough to be a 3&sigma detection, despite the higher countrates. Excitingly, however, we did find a strong QPO at 626.5 Hz, in an energy band higher than that covered by RXTE. The rotational phase at which this QPO appears is different, suggesting that we are seeing a different area of the surface. Figure 2 shows the flare lightcurve, and the time period over which each QPO is detected. Figure 3 shows the rotational phase at which the QPOs are found. 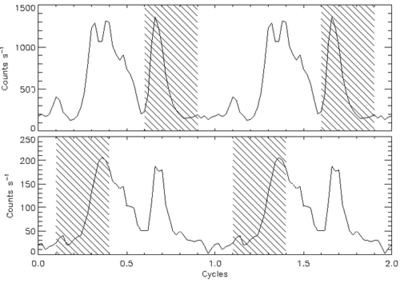 The RHESSI results confirm and extend the RXTE data on high frequency QPOs in the tails of giant flares from Soft Gamma Repeaters. The nature of the QPOs, however, clearly requires further investigation. The 18 Hz and 26 Hz features do not fit easily into crustal mode models, although the 626.5 Hz QPO is at the frequency expected for the first radial overtone of the toroidal modes. Outstanding issues include the rate at which the modes are damped, their coupling to the magnetosphere, and the means by which they modulate the X-ray lightcurve.

The differences in timing and rotational phase are also interesting. Perhaps the giant flare leads to two geographically distinct fractures, one that excites the 626.5 Hz QPO and one that excites the 18 and 26 Hz QPOs? And perhaps the strain imposed by the lower frequency QPOs weakens the crust still further at this point, triggering a secondary fracture and leading to both the late time boost in emission and the associated 92.5 Hz QPO? Whether the crustal mode model (and indeed the speculative fracture scenario outlined above) stand up to theoretical scrutiny remains to be seen. But RHESSI has certainly raised some interesting questions for us to tackle.

Biographical note: Anna Watts is a postdoctoral fellow at the Max Planck Institut für Astrophysik (MPA) in Garching, Germany. Tod Strohmayer is an astrophysicist in the Exploration of the Universe Division at NASA's Goddard Space Flight Center. For more information on this topic see astro-ph/0512630.