One of RHESSI's most interesting research activities (see the RHESSI's 10th Birthday Nugget) has centered on the remarkable phenomenon of gamma-ray flashes associated with terrestrial lightning (Terrestrial Gamma-ray Flashes, or TGFs). These are short bursts of high-energy radiation originating from the thunderstorms on the Earth below, not above, the satellite. TGFs were first discovered by the BATSE experiment on board the Compton spacecraft in 1991. Gerry Fishman and co-workers, the discoverers, described TGFs as short bursts of gamma radiation, lasting ~1 ms, with photon energies up to more than 1 MeV [1]. They were thought to be a rare phenomenon since BATSE observed only approximately one TGF per month. A decade later RHESSI found that TGFs were a far more common phenomenon. Since RHESSI do not work in a "trigger" regime, as did BATSE, it was wide open to any event, and in particular ground searches could be carried out. This increased the TGF detection rate by more than one order of magnitude. The new observations also disclosed that the photon energies could approach 20 MeV [2].

More recent measurements from RHESSI, and also other satellites, such as Fermi and AGILE, have found that TGFs can be much weaker and more numerous. It has been suggested that this is only the tip of the iceberg, and that further discovery awaits. The original RHESSI algorithm to identify TGFs used a 1 ms trigger window and a fairly strict signal-to-noise criterion to avoid false triggers. This Nugget presents results from extending the search algorithm in the RHESSI data [3]. The new algorithm indeed shows many additional events,indicating that the original RHESSI searches were quite conservative, and this allows us to broaden our understanding of the TGF phenomenon.

The new search algorithm was based on Poisson statistics with search windows 0.3 ms, 1 ms and 3 ms. We also required the candidate events to pass five selection criteria which were based on properties of TGFs from the RHESSI catalog and from other observations. Figure 1 shows examples of TGF lightcurves measured by RHESSI. Events a) and d) were presented in the RHESSI catalog while b), c), e) and f) are TGFs identified by the new algorithm. 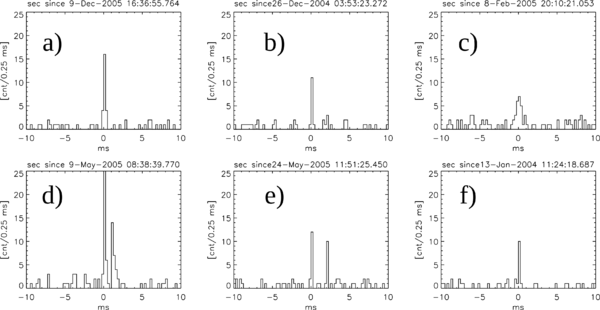 Figure 1: Example of lightcurves from RHESSI TGFs. Events (a) and (d) are in the original RHESSI catalog, while (b), (c), (e) and (f) are new ones found with the improved algorithms.

In the RHESSI data from 2004, 2005 and 2006 our new algorithm identified 1012 TGFs. This is more than twice as many as in the original RHESSI catalog, which presented 474 for the same period. Figure 2 shows the new TGFs as red circles and the catalog TGFs as green dots. The grey-scale background shows lightning activity measured by [terrestrial surveys]. The new TGFs follows the same seasonal and geographical variation as previously identified TGFs, and they also follow the seasonal pattern of lightning activity. The new RHESSI TGFs have also been matched with [sferics] - essentially radio static, a sensitive way of detecting lightning. Of the 1012 new TGFs 91 were matched with sferics. This proportion is comparable with previous results, confirming that the new RHESSI TGFs have been correctly identified.

Figure 2: RHESSI TGFs for the years 2004, 2005 and 2006. The red circles are TGFs found with the new search algorithm (1012 TGFs) and green dots are TGFs from the RHESSI TGF catalog(474 TGFs). Note that the geographical locations have an uncertainty roughly equal to RHESSI's altitude at the time of observation. There are no TGFs in most of South America since RHESSI does not provide data for this region.The gray scale indicates lightning activity as seen in ground-based observations. The dashed lines are the limits of the RHESSI orbit.

A new search algorithm has been able to identify more than twice as many TGF events in the RHESSI data for the period 2004-2006. Ongoing searches indicate that this increase in sensitivity holds consistently for the whole of RHESSI's operation time, now exceeding ten years; RHESSI is the instrument that has the largest database of identified TGF events.

[3] A new method reveals more TGFs in the RHESSI data