No Hard X-rays from Comet Lovejoy

A most remarkable phenomenon transpired Dec. 15-16, without much advance warning. This was the perihelion passage of Comet Lovejoy, discovered only on 27 November by amateur astronomer Terry Lovejoy. The discovery of C/2011 W3 (Lovejoy) was itself unique, since it was spotted before it entered the field of view of the SOHO/LASCO coronagraphs, which have normally been the source of discovery of the Kreutz group of sungrazing comets.

Comet Lovejoy was observed well by SDO/AIA as EUV emission in several bands. The SECCHI/EUVI and SWAP spacecraft did the same and, remarkably, this comet was so bright that the optical telescope Hinode/SOT could nicely observe it even without coronagraphic protection. Other observations have been reported, and still others are expected. Please see the sungrazer blog and correspond if you have input.

What has this got to do with hard X-rays? Nothing direct, it turns out, as we describe here. But one could not have known that without checking. As a comet approaches the Sun, it gains the potential energy of the Sun's powerful gravitation. This means that, at perihelion, it is moving at some 600 km/s and packing a kinetic energy of some 2 keV per proton. Actually its hydrogen content may be fairly small, but a comet typically contains a rich supply of heavy elements such as O and Fe. If it could convert its kinetic energy into random thermal motion, this 2 keV/amu would translate into a temperature of 20 MK, ten times the temperature of the million-degree corona itself. At this temperature the natural radiation of the plasma medium is in the form of X-rays via bremsstrahlung, with strong emission lines corresponding to highly-ionized atoms such as Fe XXV. The detailed physics is not so clear since this is the first time such a phenomenon has been observed.

X-rays produced at such high temperatures are normally termed "hard X-rays" by X-ray astronomers. RHESSI is of course the preeminent observatory of solar hard X-rays, but first we have checked the very convenient GOES observations. Figure 1 shows the results: no obvious signal at the time of ingress, even though solar activity had diminished significantly just prior to arrival, and hence the observations were as sensitive as could be hoped for. 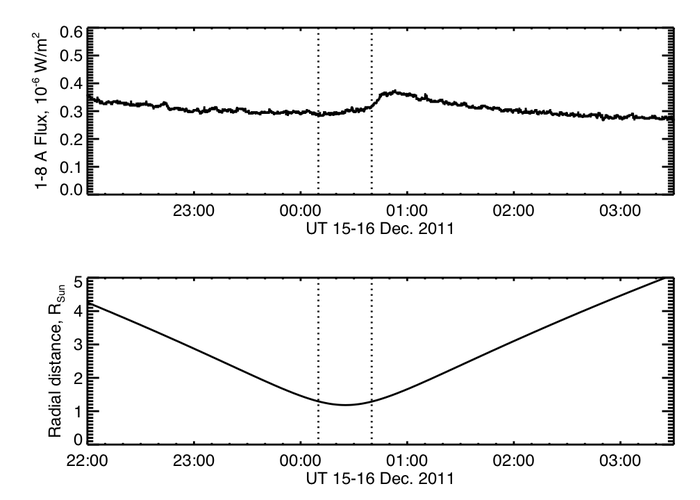 Figure 1: Upper, the GOES 1-8 A solar X-ray monitor. The vertical dotted lines mark off the time interval during which the comet was behind the Sun, as viewed from the Earth. The lower panel shows the distance from the Sun to the comet, in solar radii.

RHESSI confirms this absence of cometary X-rays (Figure 2). Although there is a brightening well-timed with the egress, the RHESSI file image shows it to have been from the farside active region AR 1367, which at that time was about 25 degrees behind the SE limb - this has nothing to do with Lovejoy, unfortunately.

Figure 2: Left, the RHESSI quicklook plot, obtained from the RHESSI Browser interface; right, the quicklook image of the weak increase seen towards the end of the The occultation interval was approximately 00:27-00:57 UT.

Although more detailed analysis will continue, it seems clear enough that Comet Lovejoy did not result in a detectably large emission measure at a detectably high temperature. This would be easy to understand; the sublimated (or otherwise ejected) mass may be too small, the density in the resulting cloud may be too small, or there is no mechanism for efficiently converting the kinetic energy lost into electron heating.

We note that comets generally are interesting X-ray sources via charge exchange: minor ions in the solar wind pick up cometary electrons and radiate recombination radiation (see, e.g., ref. [1]). It would not be surprising if similar mechanisms were at work in the comet/corona interaction; here it is the opposite case. The comet is moving rapidly, and the plasma has only small bulk motions. But, according to our observations here, if charge-exchange emission is happening, it is faint.

We will learn more as detailed analysis of this singular phenomenon develops. Never before has a comet been seen in this manner, and its impulsive distortion of the solar corona should generate qualitatively new information about coronal plasma physics.