Particle acceleration is a common process in solar flares. Typically, hard X-ray spectra following power-law distributions are observed at energies higher than a few keV, and attributed to bremsstrahlung (continuum) radiation. However, electrons at these energies are also involved in formation of high-temperature X-ray and EUV emission lines, i.e., in the bound-bound emission of highly ionized ions. For example, Fe XXV denotes a helium-like iron ion, one with two electrons; typically an ionization equilibrium theory, in which collisional stripping balances recombinations, determines the relative abundances of the different ionic states. In a tenuous plasma such as the corona, this differs strongly from the well-known Saha equlibrium.

Both the ionization and excitation of an ion are dominated by collisions with free electrons. The presence of high-energy electrons strongly influences the rates of both ionization and excitation (e.g., Ref [1], [2]). The inverse processes of recombination and collisional de-excitation are also affected. This means that the intensities of flare lines should also be influenced by the high-energy electrons, and in turn, the presence of these high-energy tails could in principle be derived also from observations of the flare emission lines, such as those of the Fe XVIII-XXIV ionic states of iron.

The X-class Flare and the Diagnostic Method

The Extreme-Ultraviolet Variability Experiment (EVE) onboard the Solar Dynamics Observatory (SDO) is a spectrometer allowing for observations of the full-Sun spectrum in the range of 60-370 and 370-1050 Â with a spectral resolution of about 1 Â, precision of about 20%, and a high cadence of 10s. Unfortunately, due to degradation and power anomalies the instruments no longer observe the Sun continuously and the 60-370 Â range has been permanently lost. 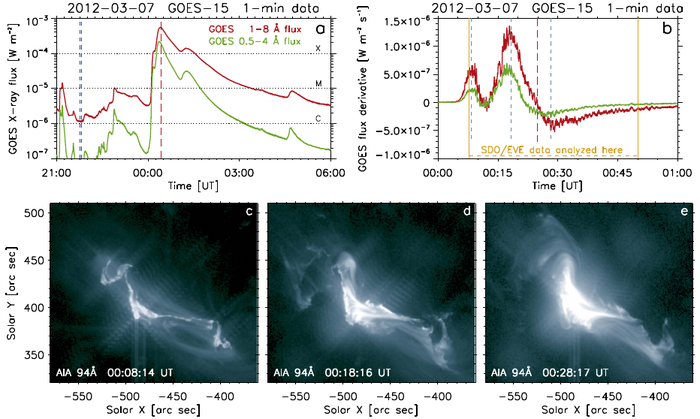 Figure 1: The X5.4 flare of 2012 March 07. Panels (a) and (b) show the GOES X-ray flux and its derivative, respectively. The vertical blue line shows the period selected as for obtaining the background EVE spectrum, while the red vertical line denotes the flare peak. Panels (c)-(e) show the evolution of the flare, as observed by the 94 Â channel of the Atmospheric Imaging Assembly (AIA) instrument onboard the SDO. From (Ref. [4]).

For analysis, we selected the well-known X5.4-class flare SOL2012-03-07. This flare is currently the fourth largest of Solar Cycle 24. It is a bright event (Figure 1), well-observed by the SDO/EVE. The weaker lines required for diagnostics of high-energy electrons can be identified in the spectrum and have sufficient intensities to perform the analysis.

To diagnose the high-energy electrons, we use the non-Maxwellian kappa-distributions (Ref. [4]). These analytic distributions have two parameters, T and kappa. The parameter T is the usual thermodynamic temperature, while the parameter kappa controls the shape of the high-energy tail, whose power-law index is kappa +1/2. For a thin-target source, one obtains that the power-law photon index gamma of the bremsstrahlung radiation is equal to kappa +1. Physically realizable values range from kappa = 3/2 to infinity, which corresponds to a purely thermal (Maxwellian) distribution.

Since both the ionization and excitation occur above a certain energy threshold, ratios of lines formed at widely different energies, i.e., ratios of lines with different wavelengths, should be the best indicator of the presence of high-energy electrons. Since both T and kappa are parameters of the distribution, they must be diagnosed simultaneously. Typically, such diagnostics is performed by using two ratios of line intensities, one involving lines formed from two different ions, which is mostly sensitive to temperature; while the other ratio consists of lines of the same ion, but with different wavelengths, which is mostly sensitive to kappa. Typically, the second ratio involves a weaker line.

The EVE spectral resolution of 1 Â means that many of the observed lines are blended. We removed the known blends where possible and used only lines where the contribution of blends is less than about 10%. To increase the photon statistics for weaker lines, we performed averaging of the spectra over one minute. Finally, to remove the contribution from the quiescent corona, we subtracted the pre-flare spectrum, which we taken to be from the previous day during 21:46-21:49 UT, i.e., when GOES X-ray flux was lowest. This helps to remove the blends from lines formed at coronal and low temperatures.

Best diagnostic options for kappa are provided by the Fe XIX flare lines. The ratio of Fe XIX 91.0+91.3 Â to Fe XIX 424.3 Â is sensitive to kappa, while the sensitivity to T comes from a ratio of the Fe XVIII to Fe XIX. We chose the Fe XVIII line at 93.9 &Acirc, which is also observed by SDO/AIA in its 94 Â channel.

The theoretical ratios together with the observed ones are shown in Figure 2. The theoretical ratios are shown by full lines, where the color denotes the value of kappa, from black (Maxwellian) to red (kappa=2). These theoretical ratios are independent of electron density (which we diagnose to be log(ne/cm-3) of about 11.5). The observed ratios are shown together with their error-bars, where the color of the error-bars denote the time, starting from 00:08 UT at the start of the flare, towards the peak phase at 00:25 UT and until 00:50 UT during the gradual phase. Analysis at earlier or later times is not possible due to absence of weaker lines in the spectrum. We note that the error-bars are rather large, which is mostly due to the calibration uncertainty, which is 20%. This uncertainty, together with the photon noise derived from observed intensities, is propagated to individual observed ratios.

Figure 2: Results of the diagnostics of the kappa-distributions over the early and impulsive phase of the flare until the peak at 00:25 UT (left) and during the onset of the gradual phase starting from 00:25 UT (right). Observed line ratios are shown by diamonds together with the respective error-bars, while the theoretical ratios are plotted by full lines, where black stands for Maxwellian (kappa equal to infinity), green for kappa=5, orange for kappa=3, and red for kappa=2. Asterisks and triangles stand for the predicted ratios given the DEMs derived from a range of Fe X-XXIV lines. From (Ref. [3]).

The results indicate strongly non-Maxwellian values of kappa < 2 at the beginning and impulsive phases of the flare. At later times, the large error-bars preclude a precise determination of kappa. However, around the flare peak and in the gradual phase, the results are consistent with Maxwellian within the respective uncertainties.

We note that the flare spectra are full-Sun, and the observed plasma is multithermal. To study the effects of the differential emission measure (DEM) on the predicted line ratios, we first performed DEM analysis of the observed Fe X-XXIV line intensities. These DEMs, calculated as a function of kappa, were then folded over the respective line contribution functions to obtain the predicted ratios. These predicted ratios are shown in Figure 2 by asterisks for the Maxwellian and by diamonds for kappa=2, respectively.

We conclude that the high-energy tails can be diagnosed from the observed flare line intensities, and that the spectra during the early and impulsive phases of the flare can show strong departures (kappa < 2) from the Maxwellian distribution.

[2] "KAPPA: A Package for Synthesis of Optically Thin Spectra for the Non-Maxwellian κ-distributions Based on the Chianti Database"