This is the first of a weekly series of RHESSI science nuggets, so it is an opportunity for an introduction to a basic tool that we use. RHESSI is a small NASA-sponsored space observatory, which carries the first high-resolution germanium detectors capable of measuring X-rays and γ-ray spectra from the whole sky. It can also make high-resolution images of solar X-ray and γ-ray sources, as we will see in many future nuggets. RHESSI, to complete the introduction, is named for Reuven Ramaty, a NASA scientist and a pioneer theorist of the evolving field of γ-ray astronomy.

This science nugget introduces one simple concept that rapidly became a vital tool in RHESSI data analysis: the spectrogram (a.k.a. dynamic spectrum). We explain this below and explain its history as a research tool in astrophysics.

A spectrogram, as we use the term, is an image displaying time on the X-axis and the spectral distribution on the Y-axis, as in the example here. It is an image in which one coordinate is time, and the other photon energy. The brightness (or color level) then represents the spectral flux, usually as a logarithm to make the dynamic range larger in the reproduction. This survey tool makes sense for the first time (for solar X-rays) with the RHESSI data, since they are the first with high spectral resolution, and one can view the entire database this way via the data browser.

This of course is not a typical example; it is RHESSI's first good observation of a major solar flare, that of April 21, 2002. The time axis covers about three hours and has black gaps during orbit night (about 30 minutes during each 96-minute orbit). The vertical axis shows the hard X-ray spectrum, 3-200 keV, and there are many features (some not relevant to the flare) worth noting. The color table has red at the bright end, and pale blue/purple at the faint end. Click on the image to get a larger version. We note the following:

Much of the behavior in this histogram is dictated by the autonomous operation of the RHESSI system of shutters, a simple but powerful innovation.

Another good example, with an application

In the example on the left, we have added a couple of things (again, click to enlarge). At the top there are now time series showing the GOES X-ray photometers and selected RHESSI counting rates, mostly near background levels. Microflares appear in the RHESSI spectrogram, second panel from the bottom. At the very bottom is a radio spectrogram from the [1] spacecraft, showing the passage of solar energetic electrons out through the corona from the microflares. After the gap for orbit night (10:30-11:00 UT) one sees other examples with different X-ray/radio relationships. Finally, RHESSI background features appear at various places, notably the pesky Ge background emission line at about 10 keV, as horizontal lines. 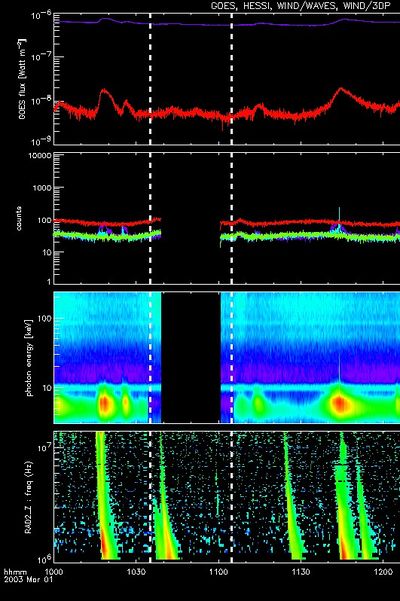 The spectrogram view of spectra arrayed in a time series, used in other fields and branches of astrophysics, now has a good application for solar hard X-rays thanks to RHESSI. It reveals a wealth of structure and allows one to compare morphological features of this structure between one kind of observation and another (sample scientist's comment: "gee whiz"). In particular the second example above shows how very sensitive RHESSI is, with excellent fine structure visible in the spectrogram even for tiny microflares.