The Galactic cosmic rays constitute a major component of the Milky Way, and consist of ultrarelativistic particles in a broad power-law spectrum with an almost isotropic distribution. Their significance can be judged from the fact that their energy density in interstellar space exceeds that of starlight or of the cosmic microwave background. When a cosmic-ray particle arrives at the top of Earth's atmosphere, it will interact with the nucleus of an atom in the air, likely to be N or O, and produce a shower of secondary particles at tens of km altitude. Occasionally this first interaction will be a nuclear reaction known as a spallation reaction, in which the target nucleus disrupts into various components, all themselves with high energies, in the form of a "star" of particle tracks. The primary cosmic rays themselves can never be directly measured except outside the Earth's atmosphere because of these interactions. The cosmic rays approach the Earth and other planets in a complex pattern of [rigidity] dependence, depending on the particle's momentum and the magnetic field strength. At the highest particle energies the primary particles ignore the magnetic field, though, and propagate almost on straight lines.

Very high-energy particles can also initiate showers in the CCD detectors of the LASCO instrument of the ESA/NASA Solar-Heliosphysical Observatory (SoHO). In such a case the image shows the tracks of various secondary particles resulting from the initial spallation reaction may appear in the snapshot image recorded by the CCD image detector. We have found many LASCO images with such records, as described here and in much more detail in Ref. [1].

Solar cosmic rays are nowadays termed SEPs, for Solar Energetic Particles, and their observation is a major component of space weather, the science (and engineering) involved in dealing with solar disturbances of the Earth and nearby space. These solar particles are roughly the same as Galactic cosmic rays (GCRs), except having different energy spectra, huge time variations, and at certain times, much greater numbers. Figure 1 illustrates the "snowstorm" effect a major solar particle event can have on the LASCO CCDs. 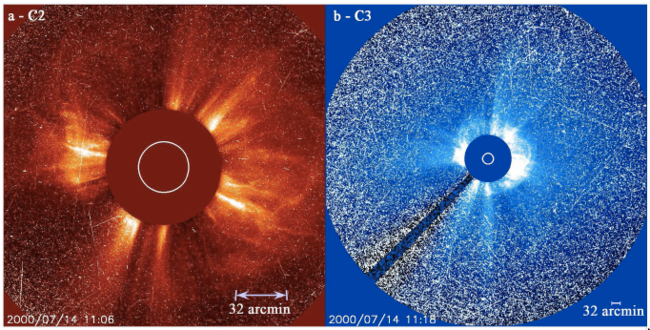 The very numerous interactions mostly appear as dots, since an SEP will generally penetrate the detector more and not interact; most particles will not be arriving parallel to the surface of the detector, but when they do they will leave tracks of varying lengths, as seen in many places in Figure 1.

These events are interesting, but even more interesting are the spallation events produced by the much higher-energy GCR primaries. One of SoHO's best examples is shown in Figure 2.

Figure 2: The spallation event seen by LASCO at 11:30 UT on 29 November 2015. Left, the LASCO image without the usual processing to display the solar corona, its primary purpose; right, a blowup of the spallation site within the CCD. The incoming particle is supposed to come as shown by the red arrow, at a small angle to the flat surface of the CCD.

The "star" of secondary particles appearing at the vertex of the event (the right panel) probably only represents a fraction of all the secondaries from this violent interaction; most of them would have escaped from the tiny volume of the CCD pixel (only 60 microns thick) and not left a track. Many aspects of this event point to a primary particle energy on the order of 1011 eV in energy (100 GeV). Such an energetic particle would, in the Earth's atmosphere, typically launch an extensive air shower.

Figure 3 shows a library of spallation events as seen by the LASCO CCDs. These sensors have small areas and are thin, and have coronal images (left panel of Figure 2) competing with the cosmic-ray signals, so they are in no way optimal for cosmic-ray detection. On the other hand they, and other pixel detectors in space, produce many images and thus offer substantial exposure for the detection of spallation events, together with the ability to record tracks for characterizing them. 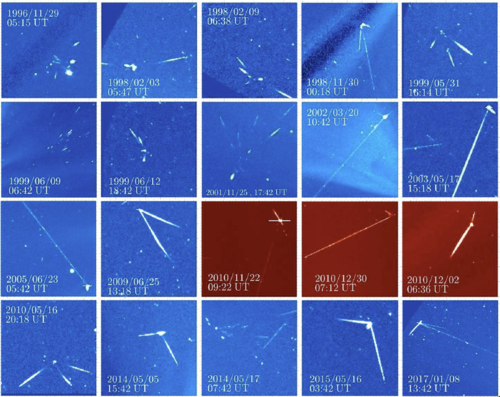 Figure 3: A library of spallation events as seen in the LASCO C2 (red) and C3 (blue) CCDs.

We note that these sensors can also record lower-energy cosmic rays via "single-event upset" (SEU) statistics. These events correlate very well with ground-based observations with neutron monitors and follow the modulation pattern that they show over the solar cycle (Ref. [2]), and so they reflect primaries in the MeV and up to GeV energy range, rather than the multi-GeV energies we estimate for the LASCO spallation events.

[1] "Observation of Galactic Cosmic Ray Spallation Events from the SoHO Mission 20-Year Operation of LASCO" (in press in MNRAS, 2018).