Solar flares perturb all layers of the solar atmosphere dramatically, but the most important domain is the lower solar atmosphere. We normally describe this as a upper photosphere slightly cooler than the surface of the Sun, overlain by a chromosphere with temperatures of order 10,000 K as regulated by hydrogen ionization. Under the drastically time-varying environment of a solar flare, these physical properties change radically. The physics has enough complexity to require solution by numerical simulation, for which radiative-hydrodynamic (RHD) simulations in 1D have been developed over the years. These simultaneously capture the basic physics of hydrodynamics and radiative transfer theory, each one complicated in its own right. Typically these models assume non-thermal particle beams originating in the solar corona, where magnetic energy can be stored and suddenly released via particla acceleration; usually electron beams are favored in this process.

A new approach to modeling the lower flare atmosphere

The simulations have shown that high energy deposition rates from electron beams produce two flaring regions at T~104 K that develop in the chromosphere: a cooling “condensation” (downflowing compression) and heated non-moving (stationary) flare layers just below the condensation. The high beam flux simulations are computationally expensive in 1D, and the (human) timescales for completing flare models with adaptive grids in 3D will likely be unwieldy for some time to come. We have developed a prescription for predicting the evolved states and emergent near-UV and optical continuum spectral properties of RHD model flare atmospheres based on an atmospheric reference parameter at early times in the simulations.

This reference parameter is the column mass in the lower atmosphere where the flare temperature increases above T~10,000 K and hydrogen becomes nearly completely ionized. The reference column mass, or mref, determines the amount of the lower atmosphere that is compressed into the chromospheric condensation in evolved states in the RHD simulations. In these evolved states, the condensation has cooled to T~10,000 K and has descended to the height of the top of the T~10,000 K stationary flare layers. We have made a (publicly available) Python GUI (graphical user interface) that allows one to vary mref through a large possible range and calculates the emergent LTE (the "local thermodynamic equilibrium" approximation} near-UV and optical continuum radiation properties of the parameterized evolved states. The interesting parameter space can then be investigated more thoroughly with time-dependent, non-LTE models. Our parameterization has been tested over a large range of electron beam energy deposition rates (1011 to 1013 erg cm-2 s-1) and can be easily adapted for other flare-heating scenarios that produce two flare layers at pre-flare chromospheric heights. The details of this parameterization have been published in Ref. [1]. 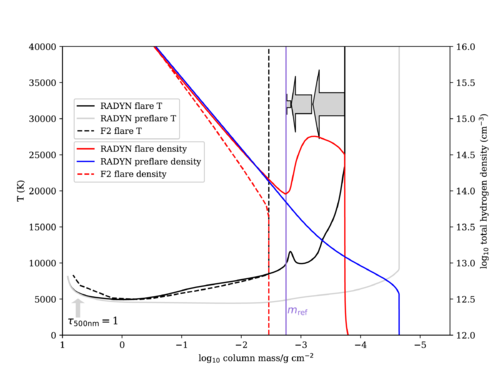 Figure 1: The deeper flare transition region in the RHD model (solid lines) with electron beam heating calculated with the RADYN code generates an increase in density by an order of magnitude. This increase in density is not included in static flare models, such as the widely-used F2 model (dashed lines), that adjust the position of the flare transition region relative to the pre-flare state. Our parameterization of the evolved state of the RADYN model (t=3.97 s after the start of electron beam energy deposition with an energy flux density of 5x1011 erg cm-2 s-1) is based on the value of the reference column mass (mref): deeper values generate denser chromospheric condensations and brighter continuum radiation. The temperature (T=9500-10,000 K) of most of the mass within the chromospheric condensation is similar to that in the non-moving layers at heights below mref, but the average density below and above mref are a factor of 5-10 different. Most of the emergent near-UV continuum radiation (as would be observed by IRIS) originates from log m from -2.2 to -3.6. Note, the height of the flare transition region in the F2 is similar to the height in the RADYN model here. Thick grey arrows pointing to the left indicate downward gas speeds with the relative vertical size of the arrow proportional to the speed (largest is ~50 km/s). For full resolution, click on image.

The deep solar atmosphere is the layer in which the most intense flare energy appears, even though this energy apparently needs to have come originally from the much more tenuous corona. Our new work (Ref. [1]), based on the RADYN simulation code plus sophisticated radiative transfer within its framework, features a simplified lower atmosphere that is determined by a single reference parameter. This work is freely available through a graphical interface by emailing Adam Kowalski (adam dot f dot kowalski at colorado dot edu).

[3] "The Atmospheric Response to High Nonthermal Electron Beam Fluxes in Solar Flares. I. Modeling the Brightest NUV Footpoints in the X1 Solar Flare of 2014 March 29"