The IRIS satellite is the next SMEX on the blocks, scheduled to join RHESSI in low Earth orbit in December 2012. Its stated goal is to study "the flow of energy and plasma through this foundation of the corona and heliosphere," where "this foundation" is the interface region between the corona and the somewhat fuzzy surface of the Sun. Conceptually, this interface is broken up into a photosphere, a chromosphere, and a transition region, at one time imagined all to be spherical entities somewhat reminiscent of Aristotle's celestial spheres.

Now we know better: these are not spheres at all, but highly structured and dynamic regions that have evaded explanation to date, partly because of weak theoretical insight, but mainly because the right observations just were not there. Their large-scale geometry is close to that of concentric spheres because solar gravity is so strong, though. The complex structure and the physics that produces it is where IRIS fits in. This new observatory will be especially suited for studying RHESSI's main specialty, flares. It will do the first comprehensive UV imaging spectroscopy of flares, among other things (note that SUMER was generally incapable of studying flares directly).

The UV and EUV emissions from a solar flare, ie the products of excitation of the "interface layer" that IRIS will study, often have an excellent correlation with hard X-rays and the powerful energy release of the impulsive phase of a flare. This was first made clear long ago by the UVSP instrument on NASA's pioneering Solar Maximum Mission, 1980-1989, although discovered in earlier missions (probably by Neupert) and also seen via the "Sudden Frequncy Deviation" type of ionospheric effect, as developed by Donnelly. Figure 1 illustrates this impulsive-phase connection via the very impulsive flare SOL2010-06-12. 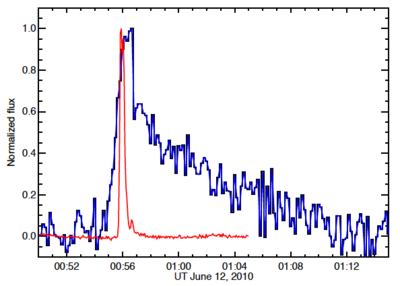 The spectrum of neutral helium is complicated, but the singly-ionized state (He II to astronomers) is simple: it is hydrogen with twice the nuclear charge and four times the nuclear mass, rougly speaking. Thus it has a Lyman-alpha analog, which is at 304 A. Normally this reflects a temperature high enough to ionize helium once, but not twice. Such temperatures also produce a flood of other UV and EUV lines, and these are the ones that show the impulsive phase that IRIS can study.

What happens in the interface zone?

A glance at Sven Wedemeyer-Bohm's cartoon of the interface zone, borrowed from the cartoon archive, make it clear just how daunting the problem is (Figure 2). This cartoon sketches out the processes in the quiet Sun, and there are substantially different ones at work in active regions. When a flare happens, we have little idea really, but IRIS will provide the best diagnostic survey yet.

Figure 2: The Wedemeyer-Bohm cartoon representing the known or suspected ("fluctosphere"?) constituents of the interface zone. A part of the active-region physics is probably represented here, given the intense magnetic flux tubes that form at the photospheric level as shown.

So, what problems could we ask IRIS to solve? We will have RHESSI imaging spectroscopy to guide us to the locations of the impulsive-phase energy deposition in the interface region. Without knowing the details of IRIS's capabilities, since it has not yet been launched, we can still speculate:

These are large-scale questions, and the first item on the agenda is just to see what IRIS can actually do on simpler problems, once launched and operating smoothly. If the one-pixel EVE observations are any guide, the imaging spectroscopy of flares will be revolutionary!

We look forward to the IRIS launch, and especially to its flare observations. These will tackle the most difficult but probably the most important problems of flare effects in the interface region, where almost all of the flare energy appears. But how?

Meanwhile, as a cultural note, Iris was the ancient Greek goddess of the rainbow. I suggest that the pot of gold to be found at the footpoint of a solar-flare rainbow (with due acknowledgment to Boris Somov) is a part of the message that IRIS will bring.