RHESSI and the Wilson effect

This science nugget shows off RHESSI observations of sunspots, rather than X-rays or gamma-rays. We observe sunspots (and other things) via the RHESSI system, which needs to be extraordinarily precise because RHESSI hard X-ray imaging has such high resolution. A telescope generally needs "aspect information" to tell which way it's pointing. This may not seem important, but it is crucial to RHESSI's science to be able to relate the hard X-ray and gamma-ray sources in detail to observations at other wavelengths. We refer you to the link above and promise to come back to the aspect system, which is truly elegant, to provide more information in future nuggets.

The sunspot observations are vital technical information for RHESSI and for other observatories, because they will enable us to export RHESSI's relatively good information to less privileged observatories. But the data also contain scientific information which allows us to confirm a brilliant 18th-century scientific observation and to clarify its heretofore indirect interpretation.

Alexander Wilson was a 18th-century astronomer in Glasgow, Scotland (and also a medical doctor and designer) in the same [1], now one of the most active centers in RHESSI data analysis. He noted, via careful visual observations of sunspots, that they appeared foreshortened as they approached the of the Sun, and in the particular characteristic manner shown in his example below: 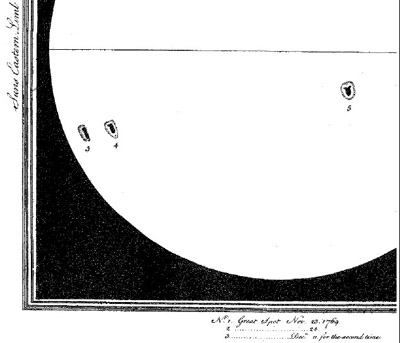 If you squint at this figure (click to enlarge first) you will see that the [2] of the (large) spot decreases in width preferentially on the side towards the center of the Sun. The interpretation is geometrically a simple one: the umbra of the spot is depressed physically below the surrounding surface of the Sun. This illustration, incidentally, and Wilson's original papers can easily be found nowadays on the Web via the NASA Astrophysics Data System. Note that in Wilson's drawing (above) there are only five spot images, whereas it takes two full weeks for the Sun to do a half-rotation. Numbers 1 and 2 are at the W limb and Numbers 3 and 4 are at the E limb as the spot reappears. Number 5 is probably from the next clear day in Glasgow, not the best place in the world for solar viewing as a rule.

Where does RHESSI fit in?

How can RHESSI improve on this masterpiece of ancient astronomy? By using its observations at the very solar limb, with an ultra-precise aspect system, RHESSI can actually observe the Wilson depression directly. The figures below show models of this, spatially (around the limb in position angle) and temporally (as a function of time, because of solar rotation): 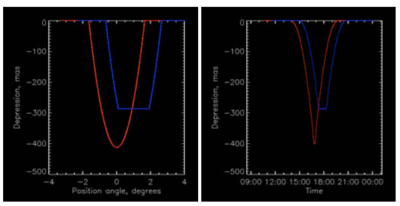 In the plots above the red line shows a deep Wilson depression, 1000 km, and the blue line shows a shallow one, 200 km. Note how short a time a 20,000-km sunspot (larger than the Earth) spends at the exact limb. In both model plots we have assumed a simple cylindrical sunspot depression and no penumbra. The curves are displaced for clarity, and the units are "mas" - one "milli arc sec" is about 750 m on the Sun, an amazingly small scale for an object so far away. We cannot see to the bottom of a deep depression unless the spot is very large, since the curvature of the solar diameter is much larger than that of a typical spot.

The figure below shows actual RHESSI limb observations in the form of a "stackplot", which shows the full circumference of the Sun (from bottom to top, North-West-South-East-North; from left to right, one line per 96-minute RHESSI orbit). Brightness shows radius deviations from circularity, as indicated in the color bar at the upper right. Click to expand: 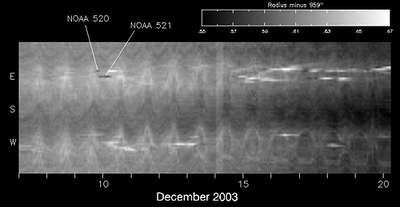 The image brightness in the stackplot above measures solar radius, over a range of 0.16 arc sec (160mas, 0.016% of the solar radius). The bright features show where plage regions cross the limb, and the tiny black features show sunspots. Here we've labeled two small sunspot groups, and will describe other features in later nuggets. The radius depression in NOAA region 521 is about 200 mas, which is comparable to the model results displayed in the plots above. This confirms that the Wilson Effect is really due to a physical displacement; it is not that the previous more indirect arguments were not convincing, but this is direct.

This has just been a preview of new things we are doing with RHESSI, making use of the wonderful aspect system to make observations not a part of the original plan. During solar minimum we plan to work on several aspects... well, features... of these data and will report them as we obtain results. Here "we" especially includes M. Fivian, the individual responsible not only for the RHESSI aspect system, but also for the sophisticated data reduction that allows us to see such subtle effects.

Biographical note: Hugh Hudson is a research physicist at UC Berkeley, working on RHESSI data and also editing and writing science nuggets from time to time.

Retrieved from "http://sprg.ssl.berkeley.edu/~tohban/wiki/index.php/RHESSI_and_the_Wilson_effect"
Category: Nugget
Facts about RHESSI and the Wilson effectRDF feed