The Earth's atmosphere is a rich source of high-energy radiations, including hard X-rays and gamma-rays, that RHESSI has been monitoring since launch. RHESSI's view is of course from space, looking down at the Earth. We introduced these surprisingly interesting terrestrial observations in earlier Nuggets. Here we describe interesting new features of RHESSI observations of terrestrial gamma-ray flashes and show how their feedback helps to understand the RHESSI data, specifically its clock data. These TGFs, associated with lightning, have extraordinary temporal precision. Reference [1] provides detailed information.

RHESSI detects gamma rays emerging from the atmosphere; these are the byproduct of the bremsstrahlung of relativistic runaway electrons produced deep in the thunderstorm cloud system. Here the electric fields can be high enough to produce the runaway, and the potential difference large enough (millions of volts) to produce gamma rays.

Nowadays it is commonly accepted in the TGF community that the role of a particle accelerator for the runaway electrons producing a TGF is played by an upward propagating intracloud lightning negative stepped leader. Such a leader, being well developed, concentrates a huge potential difference (proportional to the leader length) and an intense electric field in front of its tip. This area in front of a leader tip serves as a particle accelerator for the TGF; such a scheme matches the fact that quite often TGFs are reported to occur simultaneously with the lightning strokes detected by lightning detection networks.

The associated phenomena of course include tremendous radio emissions over a very broad band. The radio data led to an alternative model for the emissions (Ref. [2]). According to this model the radio emission that is detected by the lightning detection network simultaneously with the TGF could be radiated by the TGF itself, and not necessarily to the lightning leader. This circumstance is very important, because it might help to distinguish between different mechanisms responsible for TGF generation. Accordingly we are interested in the most accurate timing information available.

Both RHESSI and the World Wide Lightning Location Network (WWLLN) have very precise timing capabilities. How do they compare? By studying the simultaneous data over many years, we can hope to analyze any discrepancies and obtain the best possible calibration of these timebases. Note that this is not trivial: in one microsecond, light travels only 300 m, a scale small compared to a thundercloud and very, very small compared with the distance between it and RHESSI.

The corpus of data obtained since RHESSI's launch fifteen years ago, matched with WWLLN detections, has given us a kind of "standard candle" and/or a research tool of great precision, given the very small time scales involved in the discharges. Figure 1 shows the "standard candle" aspect of this study, whereby the time differences between these precisely correlated ground-based and space-based data clearly show stepwise changes that look un-natural. One step was in August 2005, and another in October 2013.

Figure 1: The time differences of RHESSI TGF peak times, and the times obtained from the world-wide lightning location network (WWLLN). One sees immediately that the phenomena permit very exact comparisons, at levels measureable in microseconds, and also that there is something systematically wrong here (the stepwise changes look like scientific artifacts).

Both of these steps have been traced and explained satisfactorily. They resulted from systematic changes in the RHESSI data pipeline. The first of them was simple the adoption by RHESSI of the full microsecond resolution for its timebase, as opposed to truncation at one millisecond. The average of this increment, 0.5 msec, closely matches the observed residual discrepancy, and therefore just results from the rounding-off of the remainders in the original sampling.

Previous comparisons of the ground-based WWLLN events with those obtained by the Fermi GBM and AGILE instruments found 26% and 14% to have close matches (within 200 microseconds) with the ground-based data. Figure 2 shows the histograms of time differences for the three spacecrafts, after correction for the RHESSI clock described above and also for light propagation time. 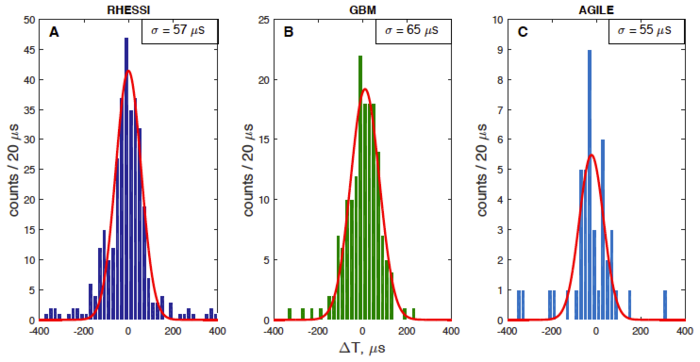 These three fits are closely similar - peaks consistent with zero, widths the same within uncertainties. Given that the relative clock accuracy for each of the three satellites is on the microsecond level, this joint result on TGF-WWLLN matches shows that the main contribution into the total uncertainty between TGFs and WWLLN sources is due to the WWLLN uncertainty (which is claimed to be better than 15 microsec) and the natural variability of the TGF-related radio emission process itself. This conclusion thus sheds some light onto the mechanism of the TGF generation. 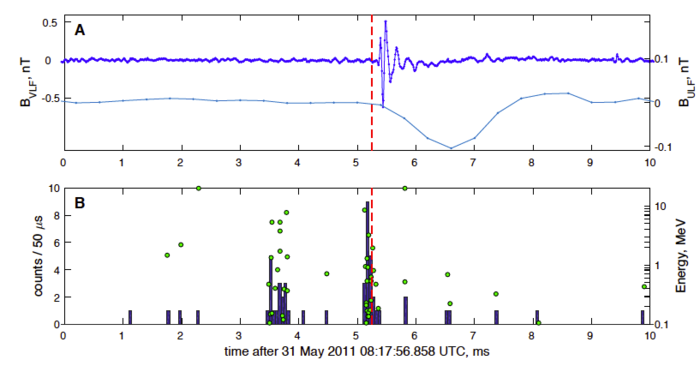 Figure 3: Upper panel, the Duke recording of sferics for one of our double-peaked events. Lower, the arrival times of individual gamma-ray photons, with their energies, showing clear peaks at about 3.6 msec and 5.2 msec. The latter produced the radio burst, not the former. The red dashed line shows the reported WWLLN time.

Literature research on this problem for Fermi GBM and AGILE TGFs revealed the same tendency (see Ref. [1]). In our work we made quantitative statistical estimates for such a tendency to be a result of a coincidence. These estimates show that the discussed phenomenon is unlikely to be of a probabilistic nature. This multi-peak TGF-WWLLN asymmetry therefore requires a physical explation.

We propose two possible scenarios that could be relevant for the asymmetry. The first one deals with the TGF generation in front of the negative leader tip (conventionally termed "+IC" although this may seem confusing!) when the axis of the leader tip segment is tilted from vertical direction due to the tortuous path of the leader propagation. However, the analysis of the VLF sferics associated with the two double TGFs makes this scenario unlikely.

Another possible scenario attributes radio emission to the recoil currents during the +IC leader stepping. The observed asymmetry in TGF-WWLLN-VLF matching pattern could be due to the fact that the most favorable conditions for the TGF generation are achieved by the +IC leader when it develops to its full length, concentrating the maximal potential difference and the maximal electric field strength in front of its tip. These conditions are also favorable for producing the most powerful radio sferics. Thus, a well-developed +IC leader can generate a multi-peak TGF, but the most powerful radio sferic is more likely to be produced at the very end of the leader propagation, simultaneously with the most favorable moment of the last TGF peak.

A detailed analysis of RHESSI TGFs, performed in association with WWLLN sources and VLF sferics recorded at Duke University, has given the following highlights.

• TGF-WWLLN matching procedure revealed systematic RHESSI clock offsets. The values, uncertainties and switching dates of the offsets were found for the observation periods from June 2002 to May 2015. This result opens the possibility for the precise comparative analyses of RHESSI TGFs with the other types of data (WWLLN, radio measurements, etc.)

• TGF-WWLLN matching results demonstrate remarkable similarity with the analogous results for Fermi GBM and AGILE TGFs. This result points to natural variability of the TGF-related radio emission process that will be interesting to explain.

• In case of multiple-peak TGFs WWLLN detections are observed to be simultaneous with the last TGF peak for all 16 cases of multi-peak RHESSI TGFs simultaneous with WWLLN sources. VLF magnetic eld sferics were recorded for two of these 16 events at Duke University. These radio measurements also attribute VLF sferics to the second peak of the double TGFs, exhibiting no detectable radio emission during the first TGF peak. Possible scenarios explaining these observations are proposed. Double (multipeak) TGFs could help to distinguish between the VLF radio emission radiated by the recoil currents in the +IC leader channel and the VLF emission from the TGF producing electrons.