Solar flares and CMEs can excite large-scale waves in the corona, observable by many techniques with our excellent modern data. These global waves can in extreme cases produce the chromospheric signature that we call a Moreton wave, but since Uchida's early interpretative work in terms of MHD wave propagation, we have understood the chromospheric wave to be a consequence of the global wave itself. Controversy has raged on and off regarding the relationships between the global waves and their causes (flare blast wave? or CME bow wave?). In this Nugget we do not discuss the exciters, but only the wave propagation. The particular events studied (see Ref. [1]) occurred on 27 January 2011: SOL2011-01-27T08:50 [B6.6], T12:01 [C1.2] , and T20:03 (C1.5), all from the same active region. This is already interesting, because these are minor flares. The RHESSI Browser shows them, highlighting the 12:18 event because of its association with a radio Type II event.

This Nugget describes the subsequent propagation of the global waves and reports a remarkable property: the apparently specular reflection of the waves at a distant magnetic feature, possibly the domain wall of the south polar coronal hole (see also Ref. [2]).

We make use of the EUV images obtained by [STEREO-A] and by PROBA2; this epoch put STEREO-A almost at quadrature, i.e. with a nearly orthogonal view of the events. The events were at the extreme limb as viewed from near the Earth. Thus the analysis of the wave dynamics can delve into the three-dimensional structure, something only possible with STEREO. Figure 1 shows an overview of one of the events, T12:01; this was the only one for which a radio type II burst was reported (but, as can be seen in the Browser summary of the radio observations, all three events had intense type III bursts - this may or may not be relevant!).

These events are unusual in several ways. First, they arise from quite trivial flare events in NOAA 11149, just at the NW limb on the date of observation - a minor sunspot group. The detection of a type II burst from a GOES C-class event is noteworthy in its own right, and it is not surprising that only one of these three events could be detected in this manner. Second, there were three events in one day, quite rare; third, they were closely homologous, a striking property; fourth, the waves impinged almost at right angles to the magnetic boundary of the south polar coronal hole. Probably without these factors working so well together, in an otherwise quite quiet corona, we would not have been able to carry out such a detailed analysis of the wave reflection.

The stereoscopic view afforded by PROBA2, from its low Earth orbit, allows us to study the reflection in the third dimension. Figure 2 shows this in the form of stackplots of wavefront position vs. time. 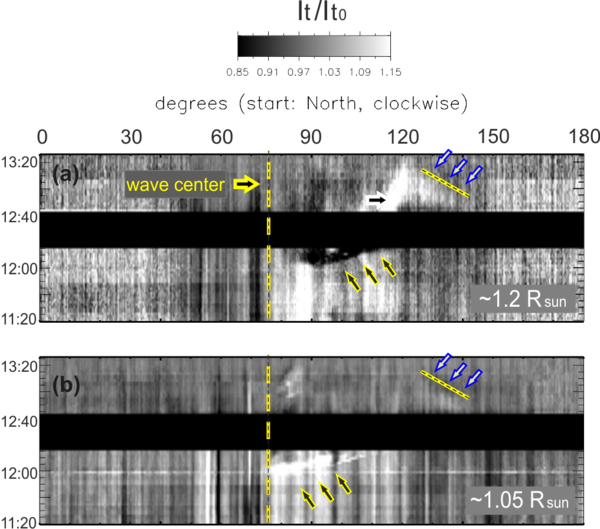 Fig. 2: Stereoscopic views of one of the events, capturing the third dimension; the upper and lower panels show two different heights, as seen from the projection at PROBA2 (position to the right, time increasing vertically upwards). The black/yellow arrows show the incident wave, and the blue/white ones the reflected wave. A more detailed multi-level study shows good consistency with the specular condition.

A simple summary of the kinematics then is shown in Figure 3 for the same event. The primary wave decelerates as it approaches the polar regions (note that all positions and velocities are referred to the surface of the Sun, hence this deceleration is real, rather than the result of foreshortening). 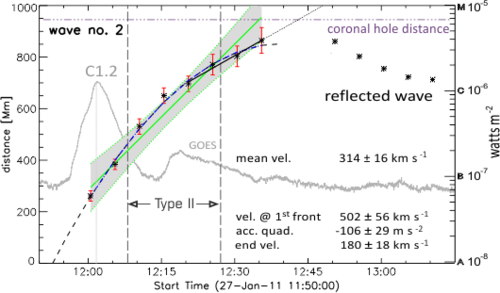 Fig. 3: Kinematics of the T12:01 event, showing the positions of the primary wave and of the reflected wave.

We learned from this stereoscopy that the primary wave appears most prominently at low altitudes, consistent with the idea that the expected vertical increase of Alfven speed should serve to refract the wave normal away from the vertical. We also learned that the reflected wave emerged with a upwards tilt, i.e. more toward the vertical. The reflection angle was of the order of 10o, consistent with the angle of incidence as expected from a specular reflection.

The detailed kinematics that we can do with these events allows us to study them far from the CME itself; as can be seen in Figure 3, the moment of reflection hapens some 45 min after the initiation of the wave. Assuming a vertical speed equal to the initial horizontal speed as observed, this would put the nose of the CME at a vertical distance of 1.9+-0.2 RSun, and so we are observing a process in the distant flank of a bow wave, or simply a freely propagating disturbance, in the case of a blast wave. In the vicinity of the reflection, both incident and reflected waves have relatively low speeds.

The refraction and reflection of global coronal waves is a necessary consequence of their characteristic description in the MHD framework, as noted long ago in Uchida's original analysis. The events of 27 January 2011 that we've described in Ref. [1] provided the cleanest evidence yet that magnetic irregularities can result not only in refraction, as often pointed out, but in apparently exact specular reflection. One puzzle is that the surface of the domain boundary at the polar coronal hole should tilt away from the vertical as the field expands outwards, in a manner inconsistent with the observed angle of reflection. Another possibility is that the reflection involves the structure of the polar-crown filament cavity, as note in the [aurora polaris] described in Ref. [3] and elsewhere. This is a question that might be resolved by PFSS modeling, which for a quiet corona such as this one may be quite precise.