Remembering Marcos Machado via his research

Marcos Machado, an old friend and colleague, passed away in September, 2018, much to our sorrow. Please see the further detail in the obituary written by his first PhD student, Cristina Mandrini.

Marcos and I shared common interests but had very different backgrounds - he, as an astronomer, actually understood radiative-transfer theory. Thus I (best defined then as a cosmic-ray physicist) learned a great deal about how solar flares work from him, and his great work from his first active period as a scientist included a really good stab at defining the solar atmosphere during the impulsive phase of a flare (Ref. [1]). Later great works involved solar X-ray astronomy, and then (to our regret) he moved into administrative work.

We are very fortunate that at the end he again had enthusiastically embraced flare research, specifically re-visiting his early work in EUV astronomy - but now using the very precise SDO/EVE data, which give Sun-as-a-star views of the EUV, a most crucial spectral band since it shows us the behavior of the transition region of the solar atmosphere, though without imaging.

Ref. [2] captures this work, published posthumously thanks to Ryan Milligan and Paulo Simões. It comes just 40 years after Ref. [3], a work of major significance on the very same topic, published during Marcos's postdoctoral stay at Harvard. Note that this was actually the same institution in which Lyman identified these features early in the 20th century.

The new work examines the behavior of the Lyman continuum in a representative set of strong solar flares. As the basic continuum emission (recombination to the ground state) of the most abundant element (in the nearest star) this spectral feature cries out for deep and detailed understanding. Figure 1 shows some EVE data. In thermal equilibrium, the population of the excited level should reflect the kinetic temperature of the electrons in the plasma, and indeed its slope approximates a blackbody Planck function that reflects the physical temperature in the region around [optical depth] unity. 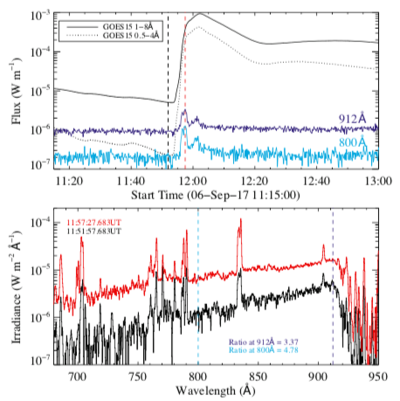 Figure 1. Upper, time profiles of the flare SOL2017-09-06, a recent very powerful event. Lower, the EVE spectra at two times, showing the distinct presence of the Lyman continuum shortward of 912 Â both in the quiet Sun (black), and strongly enhanced during the flare (red).

Figure 2 contrasts the Lyman continuum spectral parameters for the gradual and impulsive phases of SOL2017-09-06. The extremely high color temperature in the impulsive-phase spectrum (right) probably sets a record. Is it because the continuum now forms above the height of hydrogen temperature regulation, or is it a reflection of non-thermal physics? 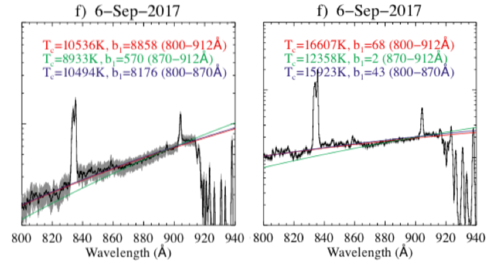 Figure 2. Lyman continuum contrasted between the gradual phase (left) and impulsive phase (right) for SOL2017-09-06, along with fit parameters. The color temperature of this major flare's impulsive phase is remarkably high.

As shown in Ref. [4], the continuum irradiance detected by EVE should vary as

relating the EVE irradiance F to the Planck function, as modified by the b1 "departure coefficient" and the angular subtense of the flare. The departure coefficient here is the ratio of the population of the first excited state of hydrogen, normalized to the value expected in thermal equilibrium. But the theory assumes Maxwellian distributions throughout, of course, and in the impulsive phase of a flare we certainly could have non-equilibrium processes at work.

The very nice paper (Ref. [2]) that Ryan and Paulo helped Marcos to complete really confirms some of Marcos's early work, with the very limited Skylab data. It also extends it because EVE gave access to the remarkably powerful flare, SOL2017-09-06. We greatly regret the loss of a friend but also the re-awakened leadership he demonstrated in this wonderful observation. It points the way to what we could learn from the Lyman continuum if only we had imaging spectroscopy to augment EVE's temporal resolution. In the meanwhile we must rely upon a combination of intuition and modeling, still in the style Marcos brought to this subject many decades ago.