Solar and space scientists have endeavored for years to predict the occurrence of solar energetic particle (SEP) events. These events have the potential for damaging satellite electronics and providing significant radiation doses to astronauts in space. In RHESSI Science Nugget 46 “Soft-Hard-Harder” Sam Krucker and Hugh Hudson describe RHESSI observations of five solar flares that occurred in 2005 January. These observations appear to confirm an earlier study done by Alan Kiplinger using Solar Maximum Mission (SMM) data from the 1980’s. Kiplinger's study found that soft-hard-harder (SHH) spectral evolution “either over flux peaks or during flux decays” are indicators of an ensuing SEP event. It is important to note that the definition of this spectral hardening is somewhat vague and the analyses can be subjective. If one can find SEP events in which the associated flares have no soft-hard-harder characteristics, then this premise can be ruled out.

In this Nugget, we discuss hard X-ray observations of five solar flares between 1998 and 2003 made by Yohkoh and RHESSI that were accompanied by SEP events. In two of the flares we observe progressive spectral hardening, which may be interpreted as SHH evolution in an X-ray peak. We cannot find evidence for SHH spectral evolution in the other flares even though they were associated with SEP having intensities in >400 MeV protons sufficiently high to be detected at ground level on Earth (by neutron monitors).

This study made use of the Yohkoh hard X-ray spectrometer (HXS) consisted of a 7.6 cm (diam) by 2.5 cm (thick) NaI scintillation counter, which observed the energy range ~35 keV to 800 keV. In our study we also made use of the front detectors of the RHESSI Ge spectrometer.

In order to search for a spectral hardening signature we accumulated data in two energy ranges ~50-100 keV and ~100 – 200 keV. In doing this we needed to correct for gain variations (slow variations of the energy scale) during the Yohkoh mission. We subtracted background counting rates using data taken just before and after the flare, where possible. We determined the RHESSI background using data accumulated under the same environmental conditions 15 orbits earlier and/or later. For all five flares we then plotted the counting rate and the ~100-200 keV/~50-100 keV count ratio. This ratio shows the hardness of the X-ray spectrum, with larger ratios corresponding to harder spectra. The variations of the hardness ratio can readily be related to any model of the source spectrum, for example directly giving the slope of a simple power law. 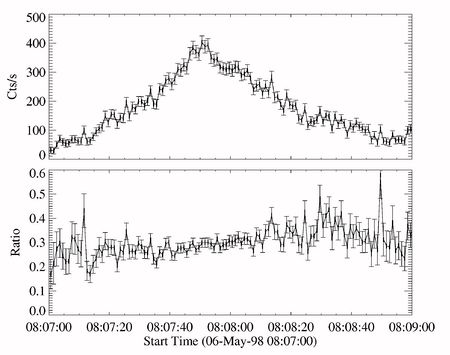 The 1998 May 6 solar flare observed by Yohkoh occurred at ~W63. The accompanying ground level event (GLE) for this flare was one of the weakest observed to date. The hard X-ray emission occurred primarily in two peaks. In Figure 1 we plot the 100 – 200 keV rates for the second peak in the top panel and the ~100 – 200 keV/~50 – 100 keV hardness ratio in the bottom panel. The hard X-ray spectrum appears to harden through the second peak and into its decay phase before it softens at the trailing edge. 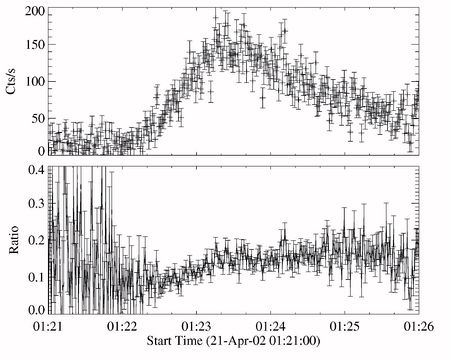 The 2002 April 21 flare observed by RHESSI occurred at W84 and was accompanied by a solar energetic particle (SEP) that was too soft to be detected at ground level. The X-ray emission came in two peaks. The first one showed no clear spectral evolution but the second one exhibited SHH behavior from onset to the falling edge of the burst, as can be seen in Figure 2.

The 2000 July 14 ‘Bastille Day solar flare observed by Yohkoh occurred at W07 and gave rise to one of the largest SEP events ever observed. It was also observed at ground level. All of the spectral evolution appears to be of the soft-hard-soft variety as can be seen in Figure 3. Several studies of this flare have been published in the research literature, and also as a Yohkoh Science Nugget; these studies found only SHS evolution based on observations from Yohkoh. 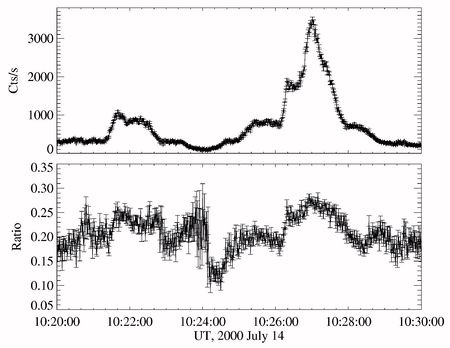 The 2001 April 15 flare observed by Yohkoh occurred at W85. It was associated with one of the largest GLEs seen in Solar Cycle 23. Once again only soft-hard-soft evolution appears to have been observed, as can be seen in Figure 4. 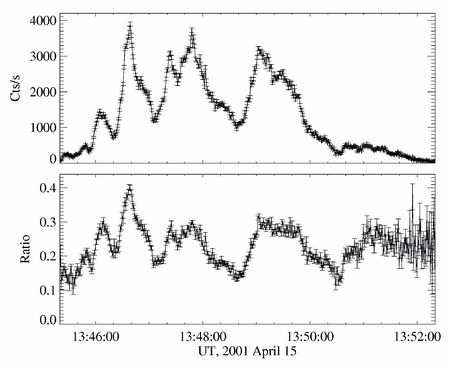 The 2003 November 2 flare observed by RHESSI occurred at W56 and was also associated with a GLE. The X-ray time history and hardness ratio are plotted in Figure 5. Once again there is no clear evidence for SHH spectral evolution. 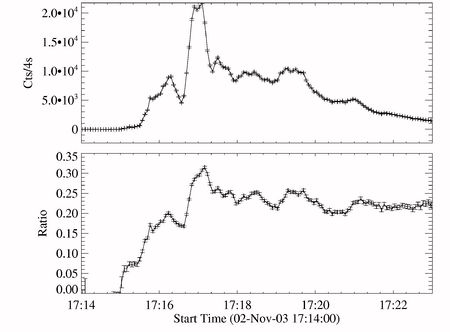 Based on our inspection of hard X-ray emission from five solar flares, all associated with SEP events, we find two (one observed by Yohkoh and one by RHESSI) that may be interpreted as soft-hard-harder (SHH) spectral evolution. However, the remaining three flares (two observed by Yohkoh and one observed by RHESSI) only appear to exhibit SHS spectral evolution, at least to our ‘untrained eyes’ (we welcome a dialog on this subject). Thus soft-hard-harder (SHH) spectral evolution is not a necessary condition for production of an SEP event and does not appear to be an appropriate predictor for such events.