The physical processes operating in solar energy releases are still unclear and under very active scrutiny. An understanding of the three-dimensional morphology and dynamics of large, eruptive, two-ribbon flares can shed light on this problem. This Nugget aims to discuss one aspect of flare development in three-dimensional space, namely the processes of energy release source motions along the magnetic neutral line.

According to the more-or-less-"standard picture" of large eruptive flares, oppositely directed magnetic field lines form an arcade of magnetic loops. Some non-stationary agent (e.g. an erupting magnetic rope or a filament) forms a quasi-vertical current sheet in the corona. Here, in the current sheet, magnetic field lines can reconnect, converting free magnetic energy to thermal and kinetic energy of plasma and charged particles, causing a multitude of secondary flaring effects.

The "standard picture" has essentially a two- (or "2.5"-)dimensional geometry, with translational symmetry along the axis of the flare arcade. Although capable of representing a lot of observational effects in the planes of magnetic loops, it does not represent any flare development in the third direction, perpendicular to the loop planes - along the flaring arcade axis and the magnetic neutral line. But often large, eruptive, two-ribbon flares develop predominantly just in this direction - in a number of observations energy release is seen to progress mainly along the flaring arcade axis. In particular, RHESSI made a great contribution in this issue observing an impressive motion of non-thermal hard X-ray sources along the flare arcade axis, the flare ribbons, and the neutral line (e.g. see Nugget 4 and Nugget 6, and Figure 1 below).

This kind of motion of the energy-release site in eruptive, two-ribbon solar flares has two bright and exciting features:

The second feature is illustrated in Figure 1 below, using an example of the well-known eruptive, two-ribbon solar flare SOL2005-01-19 (see e.g. Nugget 17, where the same flare was investigated). One can see obvious quasi-periodic pulsations with a period of about 160 s to the naked eye. The presence of quasi-periodicity in the light curves of non-thermal hard X-ray and microwave emissions is clearly confirmed by the standard time-series analyses, such as Fourier transforms. Also one can see that the sources of non-thermal hard X-ray emission (50-100 keV) move predominantly along the main flare ribbons (with an average speed of about 60 km/s) during the time interval, when quasi-periodic pulsations are observed. (See also Nugget 4 and Nugget 6 for an example of another flare with very similar properties.)

Cartoon of the processes of energy release source movement along the flare arcade axis accompanied by quasi-periodic pulsations of non-thermal hard X-ray emission is shown in Figure 2. 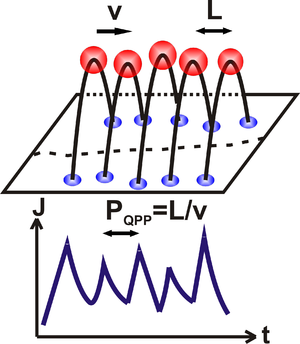 Figure 2: Cartoon. Hypothetical energy-release sources near (or above) the apexes of different magnetic loops of the flaring arcade are depicted schematically by red circles.

As was mentioned above, the nature of the hypothetical triggering disturbances propagating along the flare arcade axis is unclear yet. This is mainly due to the lack of detailed spatially-resolved observations. Thus, at the present level of understanding we can only speculate and suggest one or another hypothesis.

One of the possible and attractive interpretations based on the tether cutting scenario was proposed in Nugget 6. According to this scenario a magnetic flux rope (filament) can erupt nonuniformly (asymmetrically) along the flare arcade axis, e.g. when one of its legs is fixed and the other is cut off. As a result, different magnetic loops of the flaring arcade are stretched by the filament to a different extent at each instant of time, thus enabling their ignition by magnetic reconnection sequentially. Consequently, one can observe that the energy release source would propagate mainly along the flaring arcade axis and that the flux of hard X-ray and microwave emissions would be modulated in accordance with this process. However, it is not clear yet whether the eruption causes the energy releases or it is the other way around. Moreover, it is not easy to answer the question: "Why is energy released in a sequence of quasi-periodic acts?" being in the frame of this scenario without resorting to additional assumptions. Also, it is not clear why the observed progression speed is essentially sub-Alfvenic and sub-sonic.

Here we propose an alternative scenario, based upon the possible propagation of a slow magnetoacoustic wave across the magnetic field of an arcade. (A fast magnetoacoustic wave, which naturally propagates across the magnetic field, i.e. along the flare arcade axis, should be ruled out immediately as its speed is super-sonic and super-Alfvenic, that is in contradiction with the feature 1). The presence of plasma non-uniformities is known to modify the MHD wave propagation significantly, causing wave dispersion, appearance of cut-offs and modification of the direction of wave propagation. In particular, one of the cornerstones of MHD coronal seismology is the propagation of fast magnetoacoustic waves along the magnetic field, which is impossible in a uniform medium. For the slow waves in two-ribbon arcades, the wave-guiding effect is connected with the reflection of the waves from the footpoints, on the sharp gradients of the sound speed in the transition region.

In essence, our mechanism (illustrated on Figure 4 below) is based on the wave-guiding effect that allows the slow waves to propagate across the magnetic field (of the arcade). The group speed along the axis of the arcade is significantly lower than both the sound and Alfven speeds. This result simply follows from the linearised magnetoacoustic wave equation for a homogeneous magnetic arcade. Figure 3 shows the dependence of the group speed of slow waves along the arcade's axis upon the perpendicular wave number (i.e. the localisation of the perturbation in the direction along the arcade axis). The maximum value of the group speed is reached for the propagation angle of about 25-28 degrees to the magnetic field. Hence, the corresponding angular spectral component of a broad band wave-train, e.g. excited by an elementary burst near the top of the arcade, are the fastest. They propagate down to the footpoints where they are reflected and travel back up to the top of the arcade again. However, as the slow waves propagate slightly obliquely to the magnetic field, they reach the top of the arcade at a position different from the initial one along the arcade. There they can trigger another "elementary" flare burst by several different mechanisms (see below). Then the story repeats: a newly generated (by the daughter burst) slow wave goes down to the footpoints, gets reflected and comes to the arcade top at a position different from where it was generated. There it can trigger another burst. The time interval that separates the induced quasi-periodic bursts is then determined by the ratio of the travel path and the speed of the triggering slow wave. Hence, it is similar to the period of the second harmonics of the longitudinal mode of a coronal loop, estimated in the range 10–300 s. 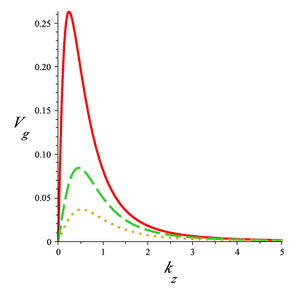 Moreover, the proposed scenario can easily explain the frequently observed feature of quasi-periodic pulsations in flares - the presence of double maxima in the "elementary" bursts (see e.g. light curves of hard X-ray emission on Figure 1). This can occur due to some asymmetry in the positioning of the wave source or in the arcade. In this case, the slow wave pulses, reflected from the opposite footpoint ribbons, arrive at the arcade top and trigger the next "elementary" flare bursts at slightly different times and at slightly different locations (this would be the case, when green and blue dashed lines do not intersect in red circles on Figure 4). 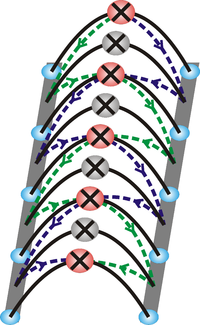 Figure 4: Schematic illustration of the proposed mechanism based on the slow-magnetoacoustic wave-guide effect in the flaring arcade. Hypothetical energy release sources near (or above) the apexes of different magnetic loops of the flaring arcade are depicted by red circles. By grey circles we depict regions where energy could be hypothetically released, but did not do this because the wave-packets did not appear there. Blue and green dashed lines indicate the rays of the triggering wave-disturbances.

We would like to emphasise here that the value of the wave propagation angle (25-28 degrees) is consistent with the observed geometry of two-ribbon flare arcades. As a rule, their spatial extent along the magnetic neutral line is typically comparable with or larger than the length of the arcade-forming loops. Hence, the propagation angle of 25-28 degrees to the field allows slow waves to make several bounces, progressing along the arcade axis.

Mechanisms of energy release triggering by the slow waves

Similarly to the tether cutting scenario proposed in Nugget 6 we also imply that the current sheet, X-points (X-lines), or 3D null-points are created in the vicinity of the flare arcade apex by some mechanisms, such as prominence eruption or some others (but we do not discuss this problem here). In the vicinity of these magnetic peculiarities slow magnetoacoustic waves can trigger the acts of energy release at least by two mechanisms:

We have demonstrated the eruptive two-ribbon solar flare development in the direction parallel to the flaring arcade axis, across the magnetic field can be readily explained in terms of the guided propagation of a slow magntoacoustic wave. The group speed of the slow perturbation propagating across the magnetic field in the arcade is essentially sub-sonic and sub-Alfvenic. The bouncing time of the wave determines the period of the quasi-periodic pulsations in the flare.