Slowly but surely towards the huge amount of energy II

A search for the extreme

How much energy does a solar flare need, to exist? How much energy must be accumulated in the magnetic field before a flare starts? And how fast must the accumulated energy be released? Should it be discharged in a short time during the flare initial (impulsive) stage? Or should it leak continuously out throughout the entire flare duration? These are several of the basic questions in flare physics, and the answers will help us to understand solar and stellar flares.

To answer the questions we decided to go to the extreme in our search: we studied flares that lasted for very long times, the so-called long-duration events. A long-duration event (LDE) is a solar flare characterized by a slow decrease in X-ray thermal emission (see Figure 1). This decrease may last from several hours to more than a day. Studies of LDEs based on past solar space missions (Skylab, Yohkoh) resulted inter alia in the conclusion that, without a continuous energy input during the whole decay phase, LDEs would decay much faster than observed. If energy is continuously released during the many hours of the decay, then these LDEs may be extremely energy-hungry. But which part of an LDE is the best tool to find out how much energy is generated? 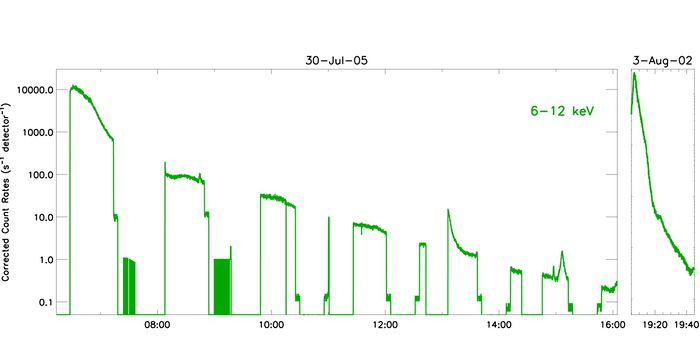 Coronal sources termed loop-top sources are observed in every flare. These are remarkable X-rays features seen close to a flare loop apex. They form before the flare maximum, and in LDEs they may last many hours. Loop-top sources presumably are located close to the primary energy release site. Thus, they are a very promising tool for analysing energy release during the decay phase. The most demanding requirement for flare energy supply is the long-lasting X-ray emission from loop-top sources seen in LDE flares. If a long-lasting X-ray source is thermal, then it must be continuously heated, because the characteristic radiative cooling time of hot (above 10 MK) and dense (≈ 1010 cm-3) plasma is ≈ 1 hour. If an X-ray source is non-thermal, then there should be a continuous acceleration of particles, to counteract the fast thermalization of non-thermal electrons. The timescale of the thermalization in the sense of momentum loss of electrons is about several seconds.

Knowing all of this we decided to do the search for how much energy can be produced during flares by studying the loop-top sources of long-duration flares. The RHESSI satellite was chosen as a source of observational data because of its high sensitivity and high angular and energy resolutions. A sample of LDEs lasting at least 7 hours was selected.

How to see a weak source?

It is a often difficult to construct a RHESSI image when the emitting source is weak. And, the loop-top sources may indeed be weak at a very late decay phase. Usually RHESSI image reconstruction is performed for detectors nos. 3–6, 8, 9. However, we were not able to reconstruct reliable images in a case of a very late phase of the LDE decay with the use of this standard set of grids. The weak signal was not the problem, since by taking integration times up to several minutes we were able to collect enough counts, i.e. about several thousands. The problem may be solved if we remember that when a source size is comparable to the resolution of a particular grid, or larger, it shows weak or even no modulation of the signal (see [1]). The resulting image obtained for such a grid is then dominated by noise; indeed this grid added to the set used for reconstruction introduces noise only. In the worst case we may not get convergence of the reconstruction algorithm. Thus, to make progress with our weak sources, we used only these grids for which the detector recorded significant modulation, and for which the reconstructed images showed a definite source in a single detector image.

The images used in further analysis were reconstructed with a PIXON algorithm in very narrow (1 keV) energy intervals. With our method for selection of detectors, we were able to obtain good quality images up to 20 keV in the early decay and up to 10 keV in the very late decay of the LDE flares. We could thus also obtain reliable fits (imaging spectroscopy) to observed spectra of loot-top sources.

Searching for energy with RHESSI

To find out how effective energy release and heating processes are at the decay phase of LDEs we calculated the energy balance of an observed loop-top source based on physical parameters estimated through imaging spectroscopy. A change of thermal energy of a source is due to the processes that cool and heat its plasma. Three major cooling processes were included into our calculations: expansion, radiation and conduction. Knowing the change of loop-top thermal energy, and estimates for the three cooling processes, we can calculate if and how efficiently the source had to be heated. The simple equation of energy balance can be written as follows:

Having the heating rate EH estimated we are able to calculate the total thermal energy deposited in a loop-top source during the whole decay of a flare. The calculation was done under the following assumptions: (a) the duration of a flare was taken from GOES 1-8 Å lightcurve; and (b) the volume was calculated from the mean area of a source as seen in images, assuming a sphere with a constant volume during the whole decay phase. With the first assumption involved one obtains the lower limit of the total thermal energy released during the decay of LDEs. 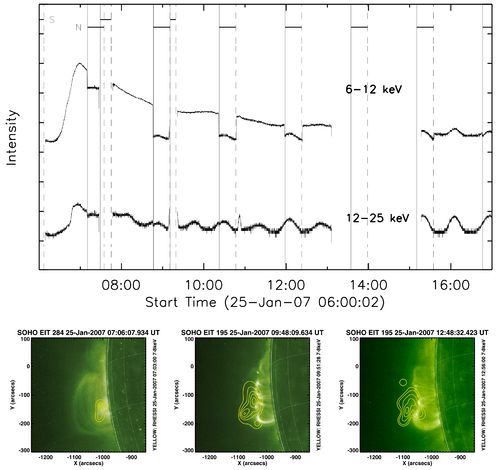 Figure 2: The SOL2007-01-25T07:14 long duration event. The upper panel: RHESSI light curves. Vertical lines mark the boundaries of the satellite night (N) and the SAA (S) periods (solid and dashed lines mark the beginnings and ends of the periods, respectively). The light curves were shifted vertically for clarity. The intensity is given in relative units. The lower panel: SoHO/EIT 195 Å images illustrating the decay phase of the flare. Contours show the emission in the 7 − 8 keV range observed with RHESSI.

Estimated values of heating rates EH are low, usually about 1 erg cm− 3 s− 1 at a very early stage of the decay, and may drop below 102 erg cm-3 s-1 at the end of the decay. But, EH is never equal to zero, i.e. loop-top sources need to be ‘fed‘ with energy continuously for many hours. Even with such a low heating rate a source of a typical volume, of order 1028 cm3, existing for 10 hours, needs in total about 1031 erg of thermal energy to be visible as it is. And 1031 erg is just the thermal energy released to sustain only long-lasting LTS. Energy released in LDEs surely is not deposited only in loop-top sources and only as thermal energy. Thus the total energy ‘produced’ by an LDE during the decay must be larger than 1031 erg. This is huge amount of energy, which can be higher than energy released during the impulsive phase of a flare (reference [2]). This severe requirement should be taken into account when building models of a solar flare. We must remember though that a flare is not only the highly-visible decay phase; energy is also released during the rise phase.

As an example of how much energy can be generated during the whole flare we took the SOL2007-01-25T07:14 event. This was a so-called slow long duration event, i.e. it had not only a slow decay but also a slow rise. In total the flare lasted almost 18 hours (GOES 1-8 Å lightcurve). In our first Nugget we estimated that during the rise of the flare there was released at least 1.5×1031 erg of thermal energy. During the decay there was additional 2.2×1031 erg of thermal energy. Thus in total the event had to generate at least about 4×1031 erg, although it was ‘just’ a C6.3 x-ray class flare.

We are grateful to members of our group Urszula Bąk-Stęślicka and Zbigniew Kołtun for their work, inspiring discussions and many critical comments.

[2] Evolution of the Loop-Top Source of Solar Flares: Heating and Cooling Processes

Retrieved from "http://sprg.ssl.berkeley.edu/~tohban/wiki/index.php/Slowly_but_surely_towards_the_huge_amount_of_energy_II"
Category: Nugget
Facts about Slowly but surely towards the huge amount of energy IIRDF feed