"Solar cosmic rays," now known less romantically as SEPs (Solar Energetic Particles), have a close association with coronal mass ejections (CMEs). These are large-scale disturbances of the heliosphere exploding magnetically out of the solar corona, and there is a clear linkage between the bow shock resulting from the outward motion of a CME disturbance, and the acceleration of particles to high energies. These are the particles that pose danger to those who wish to travel in space because of their great intensity (the Sun is close by), while the true cosmic rays - though reaching amazingly high particle energies - are too few to pose much of a hazard, at least below an absorber such as a nice thick atmosphere like the Earth's. The sources of the true cosmic rays remain somewhat mysterious.

The solar cosmic rays also have some ill-understood features. The CME association is there, but so is an association with solar flares. A powerful CME with a major SEP event almost always can be tracked down to an origin coincident with a major solar flare. Since solar flares also have abundant signatures of high-energy particles, one may wonder if some of these may leak out into the heliosphere and find their way to Earth. In this Nugget we discuss the remote-sensing observations of two solar flares by the Large Area Detector on board the Fermi gamma-ray observatory. These events were simultaneously detected by ground-based detectors of high-energy particles at a high-altitude site in the Argentinian Andes, and also by direct measurement of solar neutrons arriving at the International Space Station [Ref. 2]. RHESSI's Browser provides an overview of one of the event featured in this Nugget, SOL2011-03-07T20.

The ground-based observations refer to those of the Complejo Astronomico El Leoncito, where the CARPET detector system [Ref. 1] can record solar cosmic rays above about 9 GeV by detecting the secondary radiation caused by their interactions in the Earth's atmosphere. This is a much higher energy than the standard neutron monitor instrument responds to. For either type of remote-sensing particle detector, the primary particle energy (or at least its minimum) depends upon the [geomagnetic latitude] of the observatory. This exploits a theoretical understanding achieved in the earliest 20th century by Carl Størmer, even before the world was aware of the existence of cosmic rays. Basically these charged particles cannot propagate rectilinearly through a magnetic field; the higher-energy particles are less affected, and so there is a natural separation of particle energies with latitude; the geomagnetic field is strongest at the equator, so that is where the highest threshold is. El Leoncito is at 31 degrees S, corresponding to the 9 GeV cutoff quoted. Figure 1 shows the CARPET observations of the SOL2011-01-23 event. 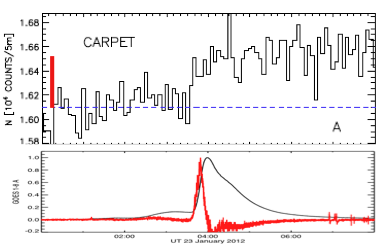 In a remarkable innovation, this event and two others have also been detected by a pioneering neutron telescope on board the Space Station [Ref. 2]. Neutrons coming directly from the Sun and reaching as far as one AU must have very high energies, since a free neutron will decay with a relatively short half-life. This instrument responds to neutron energies in the range of 80 MeV, and Figure 2 illustrates how their arrival directions for the event SOL2011-03-07 pinpoint the solar origin of the detected neutrons. 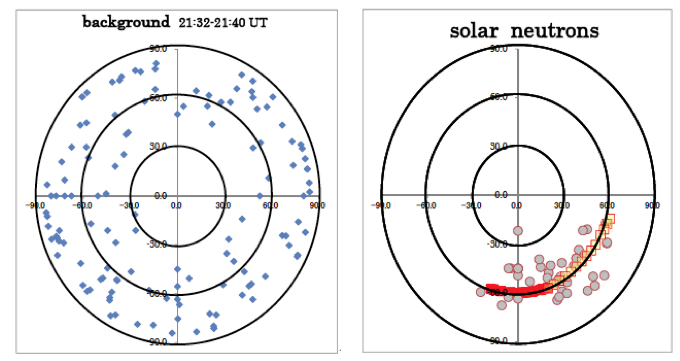 Figure 2: Arrival directions of neutrons detected by the Space Station instrument [Ref. 2] for SOL2011-03-07. Left, a background interval after the flare; right, the flare interval 20:02-20:10 UT. The neutron arrival directions are shown as round symbols, with the color boxes showing the (drifting) solar direction.

Finally, most remarkably, the two events discussed above were both also detected in very high-energy gamma radiation by the large-area telescope (LAT) on the Fermi observatory. These highest-energy gamma rays persist for many hours, as shown, and their identification with solar or heliospheric sources is not well understood at all. As discussed in Ref. [3], though, the centroid of the source for this event coincides with the flaring active region, to within arc-minute precision.

To produce such high-energy particles in or near a solar flare challenges us theoretically, and probably understanding this process will help us to understand how flares work. The observations of these highest-energy particles from these disparate detectors (El Leoncito's CARPET instrument, the neutron detector on the Space Station, and the Fermi observatory) make these events very worthy of study. Indeed, many other observatories (including RHESSI!) and detectors have provided extensive data of all sorts on these events; what has been lacking thus far is a proper synthesis of the data that will tell us theoretically what mechanisms are at work, and how they relate to the more general processes of flare/CME development.