The stately progression of solar cycles hit a major snag in between Cycle 23 and Cycle 24, as documented in previous RHESSI Science Nuggets (1, 2, 3, 4, 5, 6), although indeed signs of life had been there. Now there is a spectacular new sunspot group, NOAA 11302, which is highly active at the time of writing. Prior to this group's emergence, we had already had three X-class flares in September 2011 alone. Figure 1 shows where it fits into the generally anemic pattern of sunspot areas in Cycle 24; the histogram on the left compares the Cycle 24 areas with those of Cycle 23, with a vertical dashed line for the area reported for NOAA AR 1302 on 25 September 2011. The histogram on the left is a little subtle: of course there have been fewer spots thus far in Cycle 24, but the comparison of histograms shows a steeper distribution. Thus Cycle 24 has fewer big spots and/or they have not been lasting as long, consistent with the Livingston-Penn effect.

Fig. 1. Distributions of sunspot group aras (left) and a beautiful composite of the new major group on the right; this shows both the sunspot image and also the distribution of magnetic field in the region. The dashed line on the areas histogram (left) shows the area of the new big sunspot group.

Whatever the sunspots are doing, aficionados of solar flares are delighted with the major activity, which has thus far resulted in seven X-class flares already:

In this table the Y/Ns indicate RHESSI and Fermi orbital coverage. Of these seven flares, only SOL2011-03-09 was not obviously a gamma-ray flare, but we couldn't tell about SOL2011-09-22 because of coverage gaps. It is a bit surprising about the coverage, and possibly even eerie, that there are 11 Ys and only 3 Ns in this table; we have been unquantifiably lucky here. Another semi-eerie but indisputable fact is that almost everything active, in this cycle, appears to be in the North. For those not familiar with the program, Fermi is a newish gamma-ray observatory (launched June 11, 2008), that has materially increased our capabilities for solar high-energy astrophysics.

A typical example of some of this activity is summarized in Figure 2 from NOAA sources. The spike seen in soft X-rays (left panel here) is the major flare SOL2011-09-24 (X1.9). The solar energetic particles seen in the right panel of Figure 2 in fact were probably associated with thelong-duration event SOL2011-09-22. Such events are sometimes associated with terrestrial aurorae.

We note that this month has seen not one, but four X-class events, in fact only one of them associated with the huge sunspot group illustrated in Figure 1. Sometimes many years pass between flares of this magnitude, so whatever is unusual about the sunspots of Cycle 24, it is not necessarily reducing the flare magnitudes. However we can speculate. Yes, the right-hand panel of Figure 2 shows the presence of solar energetic particles, but not from each event. In fact, these X-class flares have been strikingly impulsive, and that also is a bit of an anomaly, even though they certainly supported CMEs and the usual panoply of coronal radio emission such as type II radio bursts. Are Cycle 24 flares sytematically different from Cycle 23 flares in this respect?

From the RHESSI point of view, the answer is "NO," because we are seeing nice gamma-ray emissions from some of these flares. This link shows the RHESSI Browser view of SOL2011-09-24 (X1.9). This includes the Fermi response to the flare, and future Nuggets will report some astonishing solar discoveries being made with Fermi's large-area gamma-ray telescope at very high energies.

RHESSI is of course a gamma-ray observatory, and so is Fermi, but with very different emphases. Fermi's routine solar observations come from its Gamma-Ray Burst Monitor, now captured routinely on the RHESSI Browser. The GBM includes massive Bismuth Germanate detectors. This amazing material (Bi4Ge3O12) has a remarkbly high mean atomic number and a density of 7.13 gm/cm3. Figure 3 shows counting rates at >300 and >800 keV for the SOL2011-09-24 (X1.9) event, nicely detected by both spacecraft. The apparent timing misalignment is a plotting artifact of no significance. 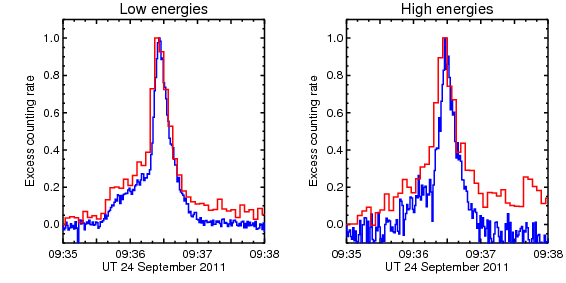 These detections have no special significance, except to confirm that particle acceleration to the highest energies is again accessible for study. There are rumors of still higher energies detected by the Fermi large-area detector (LAT); we will try to capture some of these results in future Nuggets. In general these highest-energy particles are among the most important guides to flare physics, for which particle acceleration is fundamental.

We are happy that solar activity has resumed. It may be, in fact, that this year is the actual year of the maximum of Cycle 24, which has started in an unusual manner as we've documented in earlier Nuggets. In such a case it might well be downhill from here on out! Nevertheless we are getting healthy flare activity and are busy analyzing the new and wonderful data that have become available.