The radio type III bursts, originally termed "fast drift" bursts, constitute a very common feature of the solar radio spectrum. By consensus both the Type III bursts and our RHESSI hard X-rays are both produced by flare accelerated electrons. Figure 1 offers a very simple cartoon on the relationship between the hard X-ray and type-III- emitting electrons. 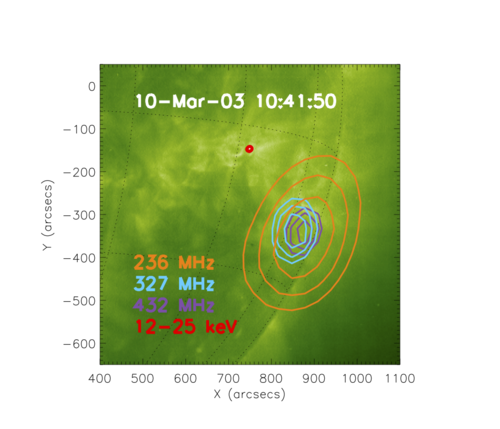 Statistical studies on the link between X-rays and type III bursts have been performed over the years, but few have dealt with the correlation between type III bursts in the corona and interplanetary type III bursts - a comparison of meter waves and hectometer/kilometer waves (see Ref. [2]). We revisit here the hard X-ray-type III burst connection based on ten years of data obtained respectively with RHESSI, the Nançay Radioheliograph, the PHOENIX2 and 3 instruments, and the WAVES experiment on WIND.

Do all coronal type III bursts have X-ray counterparts?

We analysed a subset of type III groups in our paper (Ref. [1]), where type III bursts were the only radio emissions present. A sample of 1128 groups of type III bursts above 100 MHz (called in the study "coronal type III bursts") were identified using the Phoenix catalogues from 2002 to 2011 between 08:00 and 16:00 UT. Within the same time range, RHESSI detected 18,206 flares above 6 keV photon energy. Of these events, 321 events (i.e. at least 28% of the 1128 type III bursts) had overlapping type III and X-ray flare durations and, upon manual inspection, had associated emissions. Figure 2 shows two associated events and an event with overlapping durations but no association. The rest of this Nugget is based on these events. The associated X-ray flares of our sample are predominantly GOES B- (41%) and C-class (48%), agreeing with the known low occurrence rate (4%) of type-III-only events associated with flares above C5.

Figure 2: Two events with associated type III bursts and flare hard X-rays. The third event has a type III burst that is deemed not to be related to the X-ray flare.

What correlation, if any, occurs between radio and X-ray intensities?

Figure 3 shows the calibrated peak radio fluxes from Nançay for the type III bursts as a function of the peak X-ray count-rate in RHESSI's 25-50 keV band of the associated events. 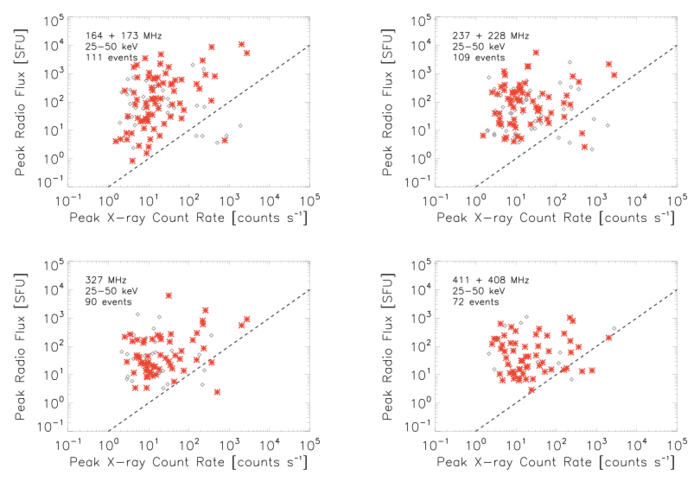 Figure 3: Correlation of peak radio flux vs peak X-ray count rate above 25-50 keV. The red stars are events where the peaks were within 40 seconds of each other. Log-log correlation coefficients of the red stars are 0.09, 0.34, 0.16, 0.46 from around 410 MHz to around 170 MHz respectively. The dashed line at y = 0.1x highlights the general absence of events with high X-ray count rates and low radio flux.

We observe only a weak log-log correlation and note a remarkable absence of events with high X-ray count rates and low radio flux. This implies that when flares with high X-ray count rates above 25 keV produce coronal type III bursts, the radio fluxes are likely to be high. The correlation is weak because the converse is not true. Type III radio bursts can be produced by low-density electron beams via the amplification of coherent waves. Also, note the trend of increasing correlation for type III bursts observed at frequencies around 160 MHz with respect to the type III bursts observed at 400 MHz.

How are interplanetary type III bursts connected with X-ray and coronal radio emission?

For 54% of the events of our sample, coronal type III bursts were associated with interplanetary bursts (IT3) (I.e. type III burst emission detected by WIND/WAVES). This is in the range of what was found earlier [2]. In addition, we studied the trends of association. Figures 4 and 5 show that there is a tendency for strong hard X-ray bursts >200 counts/s in the 25-50 keV range and for strong radio type III bursts around 160 MHz (above 1000 SFU) to be better associated with the interplanetary bursts. The trend is not observed for type III bursts around 410 MHz. The two trends suggest that interplanetary radio bursts are generated by electron beams with more energetic electrons above 25 keV and with a good connection between the flare site and the upper corona. 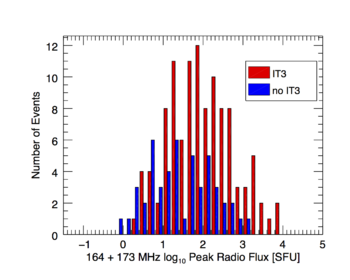 We hope that all these observational trends based on a statistical study of more that 300 events will feed into the next theoretical developments and numerical simulations of electron transport and radiation in the solar atmosphere and interplanetary medium.