Solar flares are well-known phenomena and have been studied extensively for the past 150 years in many ways, for example by RHESSI. We now know there is a direct connection between the Sun's magnetic field and solar activity. Similarly, flares have been seen from very low mass stars for many decades with extensive observational evidence that magnetic fields drive them (e.g., Ref. [1]). These cool, small, main sequence stars become fully convective for masses lower than ~0.3 M☉. However, despite the lack of a tachocline we still observe strong flaring activity from these stars. Solar magnetism probably comes from an internal dynamo action, thought to involve the strong velocity shears found at the tachocline. Thus the presence of flares on a fully convective star - which would have no tachocline - suggests that the magnetic field must be generated through a different mechanism compared with the Sun.

Through 10 years of observations, the Kepler observatory has revolutionised the field of exoplanet research and the accompanying stellar physics. For four years it focussed on the same patch of sky, providing data for over 100,000 stars. In 2014 it lost the use of two reaction wheels and was repurposed as "K2," changing the way in which it observed. Now four further years later, it has observed 18 new star fields along the ecliptic, providing photometric data for thousands of low mass stars. Amongst several of the K2 fields, we had a helping hand in putting these low mass stars on the observing programme.

Many of the photometric lightcurves of low mass M dwarf stars from K2 possess substantial variations in brightness due to the presence of a large, dominant starspot on the stellar surface. As the starspot moves in and out of view while the star rotates, it produces nearly sinusoidal changes in brightness over time; see Figure 1. In our study, we used a sample of low mass stars observed by K2 to investigate their flare properties. The vast majority of lightcurves made using Kepler and K2 had one photometric point only every 30 minutes. For a small number of stars, including our sample, we obtain one point every minute, which is essential to identify low-amplitude short-duration flares. 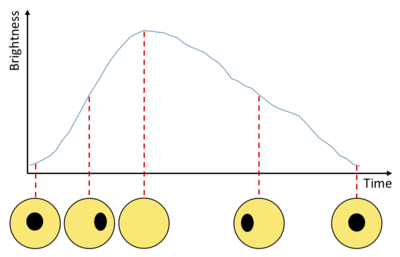 Figure 1: Sketch showing the location of the dominant starspot on a low-mass star, and the corresponding photometric lightcurve. This highlights the observed change in brightness as the cooler and darker starspot passes across the stellar disk.

Identifying flares within the lightcurve can be a time-consuming task and so, we utilise "Flares By Eye (FBEYE)", an IDL suite of programs written by J. R. A. Davenport (Ref. [2]). From this, we can derive the duration and phase of the flares as well as the energy from ground-based multi-epoch surveys such as that of PanStarrs. We find there is a decline in flaring activity after rotation periods longer than about 10 days, which is consistent with previous work (Ref. [3]). However, the relationship between spottedness and a star's activity is complex and depends on other factors such as age and mass. This has been explored by many others using K2 observations of stellar clusters of varying ages.

In solar physics, the relationship between sunspots and solar flaring activity has been studied for decades and it is generally accepted that they are closely related, but physically very different phenomena. In low mass stars, we observe periodic modulations in their brightness caused by starspots as the star rotates. In Figure 2 we show an example of this and also observe flares occurring continuously in the lightcurve, even at a peak in the rotational modulation. If we assume the physical processes which occur in solar flares are to hold for stellar flares, then one might expect to see the flares originating from active regions which typically host spots. Consequently, there should be a correlation between the rotational phase (i.e. when the spot is most visible) and the number of flares.

Figure 2: Section of a K2 short-cadence lightcurve for the star GJ 3954 (EPIC 205467732) from Field 2, covering approximately seven days, with a rotation period of 1.321 days. The black points represent the K2 data points and the red line is a smoothed version of the time-series data. Throughout this lightcurve there are larger flares present during the maximum peak of rotation when the starspot is least visible, and smaller flares at all rotational phases.

In order to investigate this behaviour further, we conducted a simple χ2 test to determine whether the phase distribution is random, as shown in Figure 3. None of the stars in our sample show any preference for rotational phase dependence, suggesting that many of the flares do not originate from nearby the large dominant spot. The question remains, what are the mechanisms responsible for causing the generation of flares in these low mass active stars? 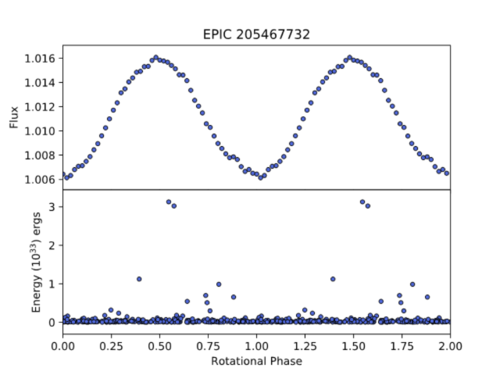 Figure 3: Top panel: the normalised, phase folded, binned lightcurve of the flare star GJ 3954. Bottom panel: the phases of the flares with respect to their energy. The data in each plot have been plotted twice, covering the rotational phases from 0.0-2.0 where 1.0-2.0 is simply a repeat. There is no correlation between flare number and rotational phase.

To summarise, we find no correlation between the rotational phase and the number of flares in our sample of M dwarfs observed in short cadence by K2. Interestingly, our result indicates flares do not originate from the active region hosted by the large starspot. We outline three scenarios to explain this: polar spots, stellar binarity systems and the presence of orbiting. To test the three scenarios further we would need to investigate the inclination and potential star-planet or binary stars in greater detail.

Our initial study (Ref. [4]) assessed the flare characteristics of 34 low-mass stars using K2 data from observing fields 1-9. Now we are in the process of repeating this analysis for stars observed in fields 10-18. More recently, TESS was launched and will be providing exciting new photometric data. Data becoming available in early 2019 will allow us to expand our sample of low mass stars. However, we will extend this research to solar-like stars, which will provide an even closer comparison to our Sun.

[3] "A path towards understanding the rotation-activity relation of M dwarfs with K2 mission, X-ray and UV data"