In this Nugget we discuss one of the more minor contributions of the great astronomical theorist S. I. Syrovatskii (1925-1979). He could be considered as one of the main pioneers of plasma astrophysics, and he had a special interest in solar physics and, particularly, in solar flares. The 1960s and 70s witnessed great progress in understanding the physics of solar flares, mainly because of the development of X-ray observations - as usual, any new branch of astronomical observation begins with the Sun, and X-ray astronomy was no exception. Even prior to the development of direct X-ray observational techniques, solar energetic particles and transient solar effects on the Earth's ionosphere had already alerted physicists to the presence of the remarkable non-thermal processes occurring in the atmosphere of our modest home star.

Syrovatskii took on board the basic ideas of plasma confinement in magnetic traps as an explanation for the high-temperature plasmas observed in solar flares. His colleague S. L. Mandel'stam's group had already detected iron K-line emission from the hydrogenic state, Fe XXVI, using Bragg crystal spectrometers on board sounding rockets. This implied very high temperatures indeed; these lines had been predicted by Elwert and by Kawabata, and their presence showed Maxwellianization of plasmas at sufficiently high density, and therefore pressure.

How did these plasmas evolve on the Sun? Syrovatskii's student Olga Shmeleva and he proposed a simplifying concept (Ref. [1]): one could imagine two limiting cases for a coronal magnetic trap of a high-pressure plasma. A nearly steady state ("constant pressure") would prevail during the period of coronal relaxation, a phase sometimes described as the Jakimiec track. The "constant density" approximation would apply to the initial sudden energy release by the flare, an epoch we normally describe with Kane's term "impulsive phase". We are now in a position to analyze this relatively simple but interesting constant-density case; at modern resolution the time scales now explicitly justify this approach.

By "high pressure" here, we mean as large as 0.001 bar. The nτE product is far below the Lawson criterion for nuclear fusion, but still (as RHESSI has observed) we detect copious gamma rays from solar flares. This provides clear, but indirect, evidence for processes fast enough to make the constant-density model valuable. In a sense this is one of the underpinnings of another of Syrovatskii's interests, the "thick target" model.

An important further clue came from the early Yohkoh soft X-ray observations of "impulsive footpoint sources", as well illustrated by the famous Masuda flare SOL1992-01-17, as shown in Figure 1. In addition to its more famous "above-the-loop-top" source, it also shows hot impulsive-phase sources at the footpoints.

Figure 1: Top, the celebrated Masuda flare, famous mainly because of its "above- the-loop-top" hard X-ray source. In addition to this, it clearly showed a high-temperature soft X-ray source at the lower footpoint (the upper one was occulted). Ignore the label "Energy release site", since the bright footpoint is actually where we see the energy released into radiation, at least. Bottom, a clearer example on-disk, from a paper by Khan et al.,with unmistakeable hot, thermal, impulsive sources at the footpoints of a coronal loop structure.

This impulsive footpoint pattern is very common in solar flares, whereas the coronal sources are quite rare. Thus a proper explanation of how flares work must deal with the footpoint emission, and to do that we turn to Syrovatskii's "constant density" limit. The problem is that a hot (< 10 MK) source in the chromosphere should expand explosively, and yet it clearly persists for the entire duration of the impulsive phase. How can this be?

Modern observations show these footpoint sources much more clearly and with splendid diagnostic power (Ref. [2]), specifically including EUV emission lines (see Figure 2) that help to identify the footpoint sources as indeed being dense enough to be thermally relaxed. In addition to this, RHESSI has provided clear evidence for very low altitudes for the hard X-ray and white-light source characteristic of the impulsive phase (see "A Flare in 3D". 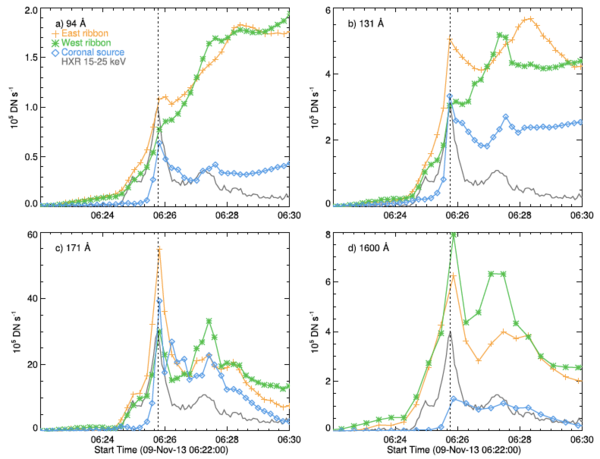 The likeliest answer to "How can this be?" lies in the complex spatial and temporal structure of flare development. A standard CSHKP or CTTM cartoon may suggest a simple process that rips along in one dimension and at the Alfvéen speed. Instead, what we actually see is multiple structures, by inference unresolved spatially, and developing very rapidly but over a time scale much longer than the Alfvéen crossing time.. Observations at the highest time resolutions available, in fact, may not be able to resolve the important variability. The process, originally described by Kostiuk and Pikelner, has been explored many 1D radiation-hydronamic models, for example that of F. Nagai (Ref. [3]). This approach is now embodied in 1D codes such as RADYN, HYDRAD, FLARIX, EBTEL and the like. These however inevitably fail to be complete, and hence have little predictive power, because the observations necessarily smear together the individual substructures.

The connection to the Shmeleva-Syrovatskii "constant density" limit simply is that we have now achieved spatial and temporal resolution to see that the footpoint excitation indeed happens so fast the flows don't matter until later on. Subsequently, of course, the corona becomes involved with flows, waves, and shocks as the coronal loops fill with hot plasma, but the heating of this plasma appears to take place in the footpoint regions [2], as Nagai had noted to be a possibility.. This timing consideration matches the spatial pattern long known to flare observers, namely that the outer edges of the ribbons, in a two-ribbon flare, contain extremely fine structures. We will do another Nugget on that topic soon....

[3] "A model of hot loops associated with solar flares. I - Gasdynamics in the loops"