The Fe and Fe/Ni line features I

A solar flare - almost by definition - makes the already hot corona still hotter. Normally 1-2 MK (million degrees), the temperature jumps up to 10-20 MK in a flare, with much higher density as well. This results in a bright soft X-ray source. When a flare happens, there is also an initial flash of hard X-rays, with energies on the order of 10-100 keV. This is the "impulsive phase", and it is followed by a "gradual phase" in which the plasma remains close to a thermalized (Maxwellian) state. Such plasmas emit line and continuum X-ray spectra. This RHESSI nugget is the first of two describing these soft X-ray observations. The figure below shows an example:

Figure 1: A spectrum from RHESSI (solid histogram), showing the prominent features labled "Fe Line" and "Fe/Ni Line", the subject of this Nugget. At lower energies there is good agreement with the Polish RESIK spectrometer.

A lot of interest in RHESSI spectra centers on the nonthermal component which is visible at the impulsive stage. However, there is much to be learned from the thermal spectrum at energies less than 20 keV, including line features which are visible at 6.7 keV and 8 keV. These features are due to groups of unresolved spectral lines emitted by iron atoms that have lost most of their electrons, chiefly the He-like (Fe XXV) and Li-like (Fe XXIV) ionization states. Here Fe XXV is astronomical parlance for an iron ion having two electrons, and Fe XXVI for iron having only one. Such ionization states imply, in normal collisional equilibrium, temperatures of 10 MK or higher. Ionized Ni lines also contribute somewhat to the 8 keV feature. Crystal spectrometers on spacecraft going back to the 1960s have observed the 6.7 keV feature. The Fe XXIV "satellite" lines forming part of the feature have been much studied ever since it was realized (by Alan Gabriel in 1972) that their intensities relative to the nearby "resonance" Fe XXV line are sensitive to the electron temperature. This fact leads to a highly useful diagnostic tool for studying solar flares, and also incidentally of tokamaks and other fusion-reactor plasmas.

For RHESSI the main interest is in getting the line-to-continuum intensity ratios of each feature. From the ratio of the two lines we can measure the temperature. The line-to-continuum ratio however is also a function of the relative abundance of Fe in the flare plasma. The segregation of the elements during solar activity results in strikingly different iron abundances in the corona and the photosphere. How do these differences arise? RHESSI may tell us.

How the lines and continuum are excited

The thermal continuum seen by RHESSI is made up of free--free (bremsstrahlung) and free-bound (recombination) radiation. Free-free radiation is emitted when an electron collides with a hydrogen or helium ion. This causes the electron to change direction (accelerate) and therefore emit a photon. A continuum then results from many such collisions. Free-bound radiation is emitted when an electron collides with an ion and gets captured (recombines). The excess energy appears as a photon whose energy is greater than or equal to the ionization energy of the ion thus formed. Recombination also then leads to emission-line features, since "bound-bound" transitions follow quickly after the initial recombination.

RHESSI has a best energy resolution of about 1 keV, so it cannot see ("resolve") the individual emission lines. But two line-like features do show up as bumps in the RHESSI spectrum, as shown in the Figure above. Centered around 6.7 keV and 8 keV, these "lines" actually consist of clusters of individual lines. The 6.7 keV feature is mostly made up of Fe recombination lines, hence it is referred to as the "Fe line feature." The "line" at around 8 keV is made up of mostly Fe XXV lines, plus Fe XXIV satellites and Ni lines. We call this feature the "Fe/Ni line feature."

We have considerable knowledge of the atomic physics describing the features we see, and we also know a bit about the plasma physics that determines the ionization states of the ions involved. We can therefore make a quasi-theoretical prediction of the Fe and Fe/Ni line strengths and the associated continuum.

The contributions of individual lines to the Fe line can be seen in the Figure below. The Fe XXV (He-like) resonance line at 6.70 keV is formed by an electron colliding with a Fe XXV ion and exciting one of two electrons into a higher orbit which then de-excites. There are a number of other Fe XXV lines, while at high temperatures (>30 MK) H-like Fe (Fe XXVI) lines are significant. There are also dozens of generally less intense (though that depends on temperature) "dielectronic satellite" lines, many due to Fe XXIV, which are excited when an electron collides with a He-like Fe ion, recombining with it, and leaving the He-like ion in a doubly excited state, i.e. one with two electrons in unnaturally high orbits. This doubly excited state may de-excite by ejecting the colliding electron (i.e. no photon is emitted) or by stabilizing to form the Li-like ion, emitting an Fe XXIV satellite-line photon in the process. The most intense Fe XXIV satellite line has an energy 6.64 keV, but there are many such lines, all with energies less than 6.70 keV (the Fe XXV resonance line energy), some due to ionization stages Fe XXIII, Fe XXII etc. down to energies of 6.40 keV. So there is a cluster of lines, all due to Fe XXV and Fe XXIV and other Fe ion satellites, from 6.40--6.70 keV. Then there are the Fe XXVI "Lyman-alpha" lines with their satellites: they form another cluster between 6.93--6.97 keV. 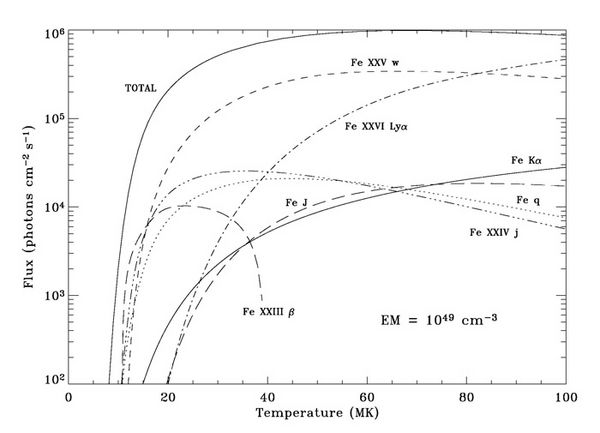 Figure 2: Detailed contributions to the Fe line (6.7 keV) feature. Note the steep increase at about 10 MK; the mere presence of this line feature implies a very high temperature.

The flux of individual spectral lines emitted by a flare, considered to be isothermal at temperature T and with "emission measure" EM = n2V (where n is the electron density and V the emitting volume), is given by G(T) x EM. Here G(T) is the "contribution function," sometimes called the emissivity, with numerical values available in databases. For the Fe and Fe/Ni line features, we can add the G(T) functions of all the lines making up each feature. Figure 2 shows the combined G(T) for the Fe line (6.7 keV) feature. It assumes a coronal abundance of Fe relative to H, which is about four times the photospheric abundance according to Uri Feldman and other experts. It also assumes that the flare is in "ionization equilibrium," which may not be quite correct during a sudden flare explosion - another good reason to study these RHESSI spectra.

In general the ratio between two lines depends on the contribution function and the abundances of the elements. In the case of the Fe and Fe/Ni line, the theoretical line ratio decreases at relatively small temperatures (less than 30 MK) but more slowly at high temperatures. It is therefore a novel way of measuring the temperature of the plasma, and is practically independent of element abundances as both features are principally due to Fe.

RHESSI spectra show soft X-ray line features, something we really did not expect from a gamma-ray telescope. This Nugget has outlined how to understand them and to calibrate them in terms of the temperature and density of the emitting plasma. What creates this plasma, and how can we use these spectral features to learn about it? We will return with more data and some interesting discoveries in the next RHESSI science nugget.

Biographical Note Ken Phillips just concluded three years as a Senior NRC Resident Research Associate at NASA/GSFC. Cristina Chifor has been a three-time GSFC summer student from Trent University in Canada, and is now a graduate student at Cambridge University (UK). The material in this nugget also owes a lot to Brian Dennis (GSFC).