The Flares of the RHESSI Monograph

Our satellite RHESSI is approaching its 9th birthday (one month from today) and the the RHESSI team (including friends) have written a nine-chapter monograph to be published by Space Science Reviews this year. The nine chapters have a total of 80 authors - a few doubling up - and the range of science subjects touches on all aspects of RHESSI flare work. Note that magnetars, the solar oblateness, gamma-rays from lightning, and other RHESSI topics seemed too far out of focus for this effort.

In this Nugget we look statistically at the flares that inspired the authors the most, and have been mentioned specifically for one reason or another. Of course many other flares have been analyzed but perhaps did not rate individual attention; for example the 24,799 microflares described in Nugget 52 obviously could not have been mentioned individually.

The RHESSI monograph has introductory and summary chapters, and seven core chapters:

The chapters have been written to stand alone and so there is considerable overlap. To make the volume more useful (ie, not to condemn any individual to read it right through) there is an extensive index (about 26 pages) - please check it out in draft form.

This monograph is probably the first for which the IAU naming convention for solar targets has been used systematically. In this convention, the most popular RHESSI flare becomes SOL2002-07-23T:00:35, where the time field has the time of the GOES soft X-ray maximum. The IAU convention also allows an extension for position, expressed in Carrington coordinates for uniqueness, but this is not really necessary for flares. With this naming convention it will be easy in the future to cross-reference studies of individual flares.

In the RHESSI monograph there are approximately 430 uses of this naming system; the first one is obviously SOL1859-09-01T11:18 (the Carrington event), and the last one in time sequence is SOL2007-12-31T01:11. Flares from cycle 24 are also being studied now (most recently, see the one described in Nugget 139, but did not find a place in the monograph because of its review nature.

In order of frequency, these flares appear most often in the monograph:

Here the final number represents the number of index references for the given flare. By any measure, based on the contents of the forthcoming monograph , the most favorite flare of the RHESSI era has been SOL2002-07-23T:00:35, for which 68 index references and 11 figures appear scattered through the chapters. Briefly, this was a powerful gamma-ray flare, and one for which RHESSI obtained it signature result, the first imaging of a gamma-ray flare.

In Figure 1 we show plots of the index references to specific flares. The cumulative distribution (left panel) does not match the solar cycle very well, but it is strongly biased by the highly non-random emphasis placed on specific flares. The right panel of the Figure shows the histogram of the number of references. SOL2002-07-23T00:35 (X4.8) sticks way out. For whatever it means, the power-law slope of the distribution here is about -0.6.

Figure 1: Left, occurrence of references in time; right, histogram of number of occurrences for each flare indexed.

Figure 2 shows an image not of this flare, but for Number 2 in the popularity list (SOL2003-10-28T11:10) for which RHESSI could make gamma-ray images (Ref. 1). Both events suggest most interestingly that the gamma-ray sources do not coincide with the hard X-ray sources, which show nonthermal electrons rather than cosmic-ray-like ions. This unexpected separation has inspired quite a bit of theoretical work (and speculation) as described in the monograph. What is the underlying plasma physics? 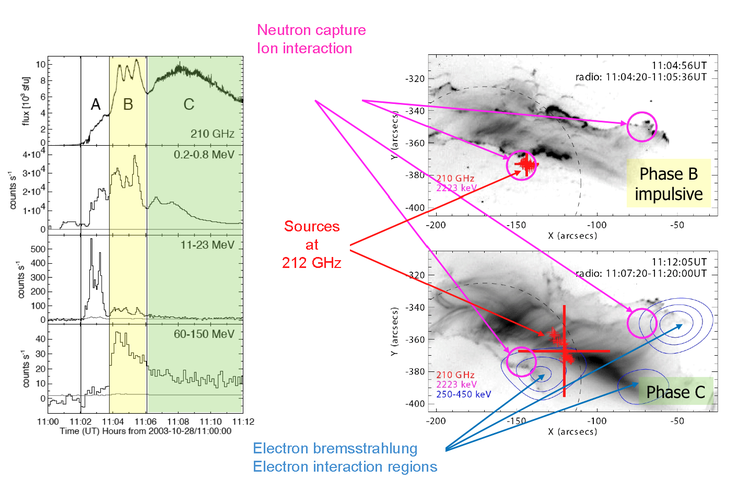 Figure 2: A complicated figure from Chapter 4 of the RHESSI monograph: the event SOL2003-10-28T11:10, a whopping X17.2 flare with many interesting features. In the images on the right, the purple circles show sources of 2.223 MeV gamma-rays, and the red crosses show locations of 210 GHz mm-wave emission. Both of these observations are virtually unpredented. The background image shows TRACE EUV loops in a typical arcade.

This Nugget offers a glimpse of the RHESSI monograph, to be published by Space Science Reviews. We think it is a good overview of flare physics, and especially the all-important problems of particle acceleration that RHESSI was designed for. It will be timely because we hope we are now starting on a new series of flare observations with remarkably better instrumentation such as that of SDO. Perhaps some of the questions unsolved in the monograph, or new questions it has raised, will be the studied in Cycle 24. RHESSI continues to make its key X-ray and gamma-ray observations.

Admirers of the top-ten list (or of the monograph) should not get the idea that these are final in any sense. There are many interesting events that did not make it into the monograph and are still being analyzed.

Retrieved from "http://sprg.ssl.berkeley.edu/~tohban/wiki/index.php/The_Flares_of_the_RHESSI_Monograph"
Category: Nugget
Facts about The Flares of the RHESSI MonographRDF feed