This Nugget follows Negative Microwave Bursts as a source of background information into the microwave literature, which new observations make highly relevant. Here we discuss the microwave bursts classified as "Post-Burst Increase" (PBI) and "Gradual Rise and Fall" (GRF, noting that this instead means something Jovian to German astronomers). These bursts are part of the traditional classification scheme for microwave radio bursts, based on fixed-frequency observations of the whole Sun. Nowadays we have microwave imaging spectroscopy, plus of course a myriad of other wavelengths to study, and so our knowledge needs some refreshment.

These slow burst types accompany the presence of new coronal material resulting from a flare. They closely match phenomena such as GOES soft X-ray bursts, flare arcades, loop prominence systems, and others. The coronal mass cycle of a flare consists of the injection of new material from the chromosphere below up into the corona, where it finds itself to be heated to X-ray temperatures. Nowadays the presence of the GOES event that shows this is almost the defining feature of a flare. Once in the corona, and following the cessation of impulsive energy release, the mass cools slowly and loses density back to its chromospheric reservoir, and then finally collapses into coronal rain as the hydrogen recombines - that is the source of the brilliant loop prominence systems seen in Hα.

The radio view became clear in 1958 (Ref. [1]), when Covington reported bimodality in the parameters of solar microwave bursts: the ones with long durations and small amplitudes, which we discuss in this Nugget, turn out to reflect strictly thermal (free-free) emission process of the hot and cooling loops in the flare's coronal mass cycle. Figure~1 shows this bimodality. 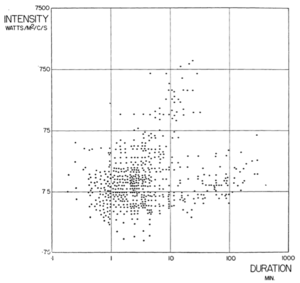 Fig. 1: An early (1958; see Ref. [1]) statistical view of the correlation between flux and duration for solar microwave bursts. The family with low fluxes and long durations comprises the post-burst increase (PBI) and gradual rise-and-fall (GRF) types.

Theoretically, the microwave thermal emission would make a virtually flat spectrum in f7nu;, varying in frequency mainly via the "Gaunt factor" that describes the effect of screening on the basic electron-ion collisions; at the highest frequencies this flat spectrum would be supplemented by free-bound emission, and the whole spectrum would roll off exponentially as hν begins to exceed kT. At the lowest frequencies other deviations could happen. The plasma will become optically thick and/or absorb the free-free emission, or it could be supplemented as well by gyroresonance emission if the plasma is sufficiently magnetic. Kosugi (Ref. [2]) had noticed, in one of the most recent papers (1985) on these phenomena, that the PBI/GRF component of the microwave flare sources appeared to be limb-darkened, and yet optically thin - this is a conundrum, and he explained it by appealing to the gyroresonance process. This remains to be test with modern data.

The whole-Sun data at fixed frequencies continue to the present, and now supplemented by a host of wonderful new data at most wavelengths. Since one can see coronal thermal sources so well, the time is certainly ripe to re-visit the physics of the thermal radio sources. Figure 2 shows a modern (Nobeyama) view of a flare with a significant post-burst increase.

1G This event appeared to produce a post-burst increase of about 30 SFU, decaying by a factor of two in about one hour. The 35 GHz data are discrepant, based on the hypothesis discussed here, since they should agree in flux density with the 17 and 9.4 GHz data (which do agree); the likeliest explanation lies in radiometer calibration errors, but the Nobeyama experts might disagree with that. If so there are other, more exciting possible explanations. The deficit at 3.75 GHz has a natural interpretation in terms of optical depth or absorption. Based on the crude formula

which deals obscurely with matters such as ionization equilibrium, abundances, and other subtle issues, this would correspond to an emission measure about right for the GOES source in this event, as imaged (for example) by RHESSI.

This relationship between microwave thermal signatures and those at other wavelengths has not been tested quantitatively for decades, but the hard X-ray, EUV, UV, optical, and radio data have vastly improved now. This Nugget re-introduces this topic, following in the footsteps of Negative Microwave Bursts. There is a great deal to be learned about several aspects of flare physics from such comparisons. We will return to this topic in future RHESSI Science Nuggets.