RHESSI recently celebrated its 10th anniversary, and the length of its database now approaches the length of an 11-year solar cycle, albeit from maximum to maximum (2002-2012 at the time of writing).

The objective of this Nugget is to advertise the RHESSI flare catalog, a unique database of hard X-ray flare occurrence - the second, following the Yohkoh/HXT catalog (1991-2001), to include flare positions and spectral information. We discuss these as an application of the catalog in the next section of this Nugget.

It is very easy to access the catalog: from any computer using SolarSoft and having the RHESSI software, one simply enters

to see the contents (including GOES flare classifications and NOAA active-region identifications). There is also a GUI for selecting flares which you get by typing

See the RHESSI Web pages for much more explanation of the data and the catalog database. For a detailed explanation of the creation of the flare catalog, see this Wiki article. The RHESSI Browser, as described in an earlier Nugget, shows simple quick-look light curves and images for each flare in the catalog. As of 20 August 2012 the catalog held 63,984 entries, for a mean flare rate of more than 16 entries per day. For comparison the event list, for the same time interval, contained some 16,206 events, even with almost continuous coverage (unlike RHESSI's, which has appreciable gaps due to its low Earth orbit). The RHESSI catalog is therefore is a bit deeper, though we note that some flares trigger the catalog criteria multiple times. Its other advantages include locations and spectra, and also (because RHESSI observes hard X-ray events, which have shorter durations) less background confusion for fainter events. GOES notoriously under-counts flare even at the C class during solar maxima, simply because the events pile up upon each other.

One easy application of the RHESSI catalog has to do with flare occcurrence patterns. Earlier Nuggets (1, 2) have already described the systematic appearance of the flare locations thus derived. Figure 1 shows two graphic representations of the catalog positions: a simple [x,y] plot, with each point denoting one entry; and a plot of radial distances (in both cases, the measurement refers to displacements in arc sec from Sun Center). 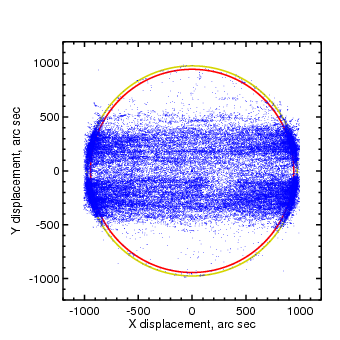 Figure 1: Raw map of catalog flares viewed against the solar disk (the two colors show its maximum and minimum angular extent). This map includes artifactual errors that can easily be screened out. 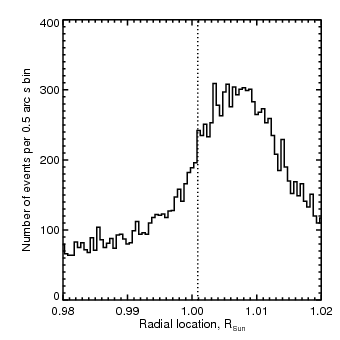 Figure 2: Distribution of flare radial locations at the extreme limb, now converted to units of solar radii. The vertical dotted line shows the theoretical height of the X-ray limb, as determined via model atmospheres and the cross-section for Compton scattering.

The plots are informative. On the left one can see some of the artifacts present in the catalog; these include events at high latitudes. Ref. [1] studied an earlier version of this distribution and concluded that all of these were artifactual, and that all of the RHESSI flare and flare-like events in fact come from active regions, which do not occur above latitudes of about 40 degrees. Note that the horizontal streak of points at [X,Y] = [200-500,700] is in fact real, and these record-setting events include an M-class flare that we may describe in an future Nugget.

The plot on the right (radial distances) ignores all of the artifacts. This should be a lesson in data analysis; one can see the artifacts in the (X,Y) map clearly enough, and a correct analysis procedure would involve screening the catalog entries to remove these. A main source of problems here comes from the (rare) RHESSI offpoints, and other occasions where the pointing coordinates are unreliable.

Bearing that in mind, Figure 2 (right) matches expectations: the flare hard X-ray sources form a cloud in the solar corona, and their distribution must have the appearance of an optically-thin shell. This would have a jump by precisely a factor of two at the X-ray limb (shown as estimated theoretically as a dotted line in the Figure). Any events located above this point would lie at high altitudes (see the Nugget on coronal hard X-ray sources). Of course, angular resolution is an issue here: the FWHM of the RHESSI [collimators] used for the catalog is only about 0.01 RSun, and so there are comparable uncertainties in a distribution made in this way.

Caveats regarding use of the flare catalog

1.) As mentioned above, position information can be inaccurate, typically due to difficulties with the spacecraft pointing solution, and high latitude positions in particular are not reliable.

2.) The RHESSI flare list over counts flares, especially when handling long-duration events. In particular, data gaps of longer than 5 minutes, caused by spacecraft night, SAA passage, or missing data will cause a split of one flare into more than one events. Also events that some observers might call single flares with multiple peaks are often split into separate flares; this is a consequence of the fact that flares in the 6 to 12 keV range overlap in time. The process used to split flares is documented in this Wiki article.

3.) GOES and NOAA information often lags behind the RHESSI processing, so data regarding active regions and GOES class is often missing. This is usually picked up during later reprocessing, but users are encouraged to regard these quantities as informational, and not attempt quantitative analysis without careful testing.

4.) The RHESSI flare list is currently undergoing re-processing, to fix a problem with calculation of X-ray photon flux. A new version should appear in late 2012.

We have briefly described the RHESSI flare catalog and sketched out one application (the determination of hard X-ray source heights). At first look the catalog data are only a crude approximation, with low resolution and minimal sampling. And yet the histogram shown in Figure 1 (right) can be made with a binning of 0.5 arc s, a "super-resolution" factor of 10 or so. Such is the potential power of a very large database, but of course the harder one pushes the precision of such a distribution, the greater the influence of systematic errors. We definitely encourage users to explore the catalog, consider its systematic effects, and study large volumes of RHESSI data to learn precise things about flare occurrence.