How big is the Sun? This question has to be answered with "it depends", since the observed diameter is wavelength-dependent, as is evident in Figure 1 (Ref. [1]). This shows generally that the Sun is smaller at visible/IR wavelengths, with the simple explanation being that the material of the solar atmosphere has minimum opacity in that range. As one can see from the small uncertainties (for some of the wavelengths), this question to "how big" also has to depend upon your definition of "big". One standard technical definition, for the observers, is just to find the steepest point of the edge, the "inflection point" of a photometric scan across the edge of the Sun. This is clear but the result depends ambiguously upon the resolution of the telescope and other factors. 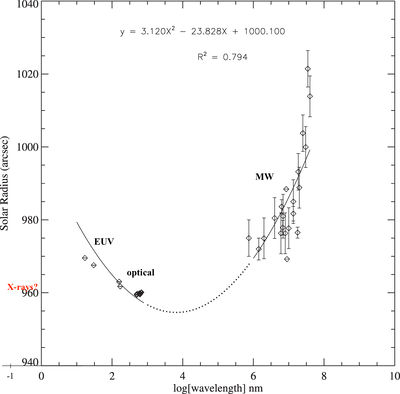 Figure 1: Compilation of solar radius measurements at different wavelengths from EUV to microwaves (MW) (after Ref. [1]). These are actually radial distances to the limb, rather than radius directly, expressed in angular units. The fit is ad hoc. Because of increased opacity for rays tangent to the limb, it is always higher than the actual radius would predict - some 350 km, or half an arc second, based upon models (at visible wavelengths).

The IAU nominal value for the solar radius is given as 695.7 Mm [2]. This value is based on optical measurements and depends on details of the atmosphere and radiative-transfer models. In two previous RHESSI Nuggets we described a new technique that uses RHESSI visibilities of occulted solar flare sources to measure the height of the X-ray limb (The X-ray Limb) and reported on preliminary analysis of a suitable solar flare (The Solar X-ray Limb II). As reported in the second Nugget there were some problems with the chosen flare, but having found a better suited candidate, we can finally claim success!

The event that led to our success, SOL2011-10-20T03:25 (M1.6), turned out to be the perfect candidate for several reasons. AIA context images provide independent confirmation that the event was indeed occulted. In addition, RHESSI's Detector 2 was working well enough to provide usable data for this kind of work. This allowed us to perform a set of rigorous tests to confirm that the observed peak in visibility amplitude is indeed the signature of a limb-occulted source.

Figure 2: Left: AIA 131 A image of the flare SOL2011-10-20T03:25 with contours from a visibility forward fit. Middle and right: visibility amplitude as a function of position angle measured with RHESSI's grids 1 and 2. The dashed line gives the angle of the limb. The widths of the peaks (as found by fitting the Gaussian given as blue dotted line), their maximum amplitudes, and the ratio between the maximum amplitude in G1 and G2 are consistent with the expectations for an occulted source.

The height of the X-ray limb

We find (averaged over the measurements from G1 and G2) the X-ray limb distance to be RX = 960.11 +- 0.15 +- 0.29 arcsec at 1 AU. The uncertainties include both a statistical error from the visibility fits, and a systematic error that includes the phase scatter of the visiblities that are associated with the limb, the length of the metering tube that holds the grids, and the accuracy of the Sun-center determination from the solar aspect system. How does this height compare with the optical limb height and with predictions for the X-ray limb height from models? We show this in Figure 3, calculating the limb height from the standard VAL-C model [3], a 1D representation of the height variation of plasma properties such as the density, which interestingly predicted a small feature at the K-edge of iron. 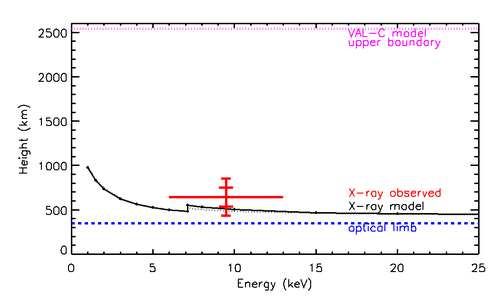 Note that our occultation limb measurement is upside-down relative to the usual measurement of the emission limb. Thus without careful model considerations one cannot directly compare the results with classical determinations. We think this is the first time that people have tried to do this measurement, and the main take-home point here is that it does seem to work quite well.

After much hardship we managed to show that the method works in principle and we can report the first measurement of the X-ray limb height. You can read all the details in our forthcoming ApJ publication [4]. However, many questions remain and new ones have been raised:

The next steps thus have to include better modelling and a systematic search for a larger number of events over the whole duration of the RHESSI mission to augment this first detection, answer the above questions, and possibly make new discoveries.

[3] "Structure of the Solar Chromosphere III"