Coronal mass ejections (CMEs) are often accompanied with activities low in the solar atmosphere including, e.g., extreme-ultraviolet (EUV) waves and coronal dimmings (see Fig. 1 and its movie). The bright EUV waves (also known as EIT waves; see Nugget 79) are large-scale disturbances propagating through the solar atmosphere most probably driven by the laterally expanding CME flanks. The dark dimming regions represent decreased emission in EUV and soft X-rays, most probably caused by the CME expansion, and are therefore interpreted as low-coronal footprints of CMEs (see e.g. Nuggets 114 and 179). Two different types of dimming regions are observed: core or twin dimmings -- stationary, long-lived regions of strongly reduced EUV emission closely located to the eruption site covering opposite magnetic polarities. Secondary or remote dimmings -- more wide spread and less dark regions extending to significant distances away from the eruption site. As the corona is optically thin, bright as well as dark features represent intensities which are integrated along the line-of-sight (LOS). When viewed from single vantage points, EUV waves as well as dimming areas might severely suffer from projection effects, which makes their interpretation tricky. 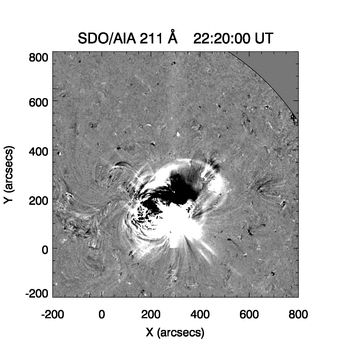 Figure 1: Frame from an animation of the flare-CME-wave event from SOL2011-09-06T22:12 observed in the SDO/AIA 211 Å imager. A bright moving arch as well as dark patches are clearly observed. Those represent the EUV wave signatures plus CME expansion and dimming regions.

Two eyes (satellites) are better than one

Observing the same feature with the two STEREO spacecraft (SC1, SC2) located at different positions in the heliosphere, is crucial for our understanding of how LOS integration affects remote-sensing image data. Each pixel intensity in an image represents the sum over the intensities that lie along the LOS. We may simply check LOS effects by selecting regions of interest from SC1’s point of view and reconstructing their corresponding LOS for data of SC2. Selected regions of interest (ROI) contain EUV wave signatures and coronal dimming regions that occurred on 6 September 2011 in association with a X-class flare/halo CME event (SOL2011-09-06T22:12). This event was observed on-disk by SDO/AIA SDO/AIA and in quadrature by STEREO-A/EUVI, where the eruption site was located close to the Western limb.

EUV wave: as can be seen in Figure 2 the identified EUV wave signatures from SDO/AIA (green and orange dots indicate the the peak and leading front of the wave) do not match those identified from STEREO-A/EUVI (blue and red crosses mark the wave front at the solar limb and at a height of about 90 Mm). Following the reconstructed LOS for the EUV wave positions of SDO (indicated by the lines in the corresponding colors in the right panel of Fig. 2) discovers why. The signatures observed on-disk in SDO/AIA contain contributions from the expanding CME front higher up in the corona. This significiantly influences the speed measurements of the wave. From STEREO-A’s view the resulting speed of the wave is much lower (v ~ 525 km/s) compared to the LOS result obtained from SDO (v ~ 1000 km/s).

Dimming areas: as given in Figure 3 we reconstruct the three-dimensional position and extension of the dimming areas by selecting different ROIs within the dimming identified on-disk from SDO/AIA. The green region marks a potential core dimming, the red one a secondary dimming region, while the cyan oval includes regions of enhanced as well as reduced emission. The orange region marks the cross-check with quiet Sun conditions. Again, the position of the ROIs are transformed to the simultaneous observation of STEREO-A/EUVI (cf. middle panel of Fig. 3) from which we reconstruct the projected LOS for selected points inside the ROIs (indicated by the colored lines). One can see nicely that the LOS rays cross different regions of the expanding CME body resulting in different intensity contributions when summing up along the LOS. In this way, we find that the CME front adds to the LOS intensity whereas the low density CME body reduces the LOS intensity (compare, e.g., the location of the purple and the cyan cross within the cyan oval). The reconstructed LOS of the core dimming region (green ROI) crosses fully the center of the CME bubble. The ROI marked in red shows in SDO a clear dimming while in STEREO-A it corresponds to a quiet Sun region. This is due to the LOS ray crossing first an expanding loop and later on the center of the bubble which results from SDO view in decreased LOS intensity.

Observations from STEREO-A/EUVI reveal that the on-disk EUV wave signatures identified by SDO/AIA cover also contributions from the CME front higher up in the corona, leading to an overestimation of the speed of the wave by a factor of two. As the on-disk wave speed is comparable to the (deprojected) speed of the CME, this reveals that the identified on-disk wave signature actually covers part of the erupting CME. Only with two vantage points we can clearly reconstruct dimming areas. From this we conclude that strongly reduced dimming regions (core dimming) represent the actual footpoint locations of the erupting flux rope. This is in contrast to less strong dimming areas which might be a projection effect caused by strongly varying intensities located along the LOS (e.g., expanding CME front and body). The event discussed in this Nugget demonstrates that single-view image data provides us only with limited insight to correctly interpret coronal features, such as EUV waves and coronal dimmings. The full study is in an article [1] now in press.