Too few? Too many?

The X-ray images of solar flares with spectral capabilities taken by the Hard X-ray Telescope (HXT) on board of Yohkoh and Reuven Ramaty High Energy Solar Spectroscopic Imager (RHESSI) have revealed a wealth of information on spatially resolved distributions of energetic electrons in solar flares. RHESSI sees electrons propagating in the characteristic magnetic loop structures of the solar corona. The RHESSI observations indicate distinct coronal and footpoint X-ray sources. The hard X-ray (HXR) footpoint sources are usually described in terms of collisional thick-target models where the electrons accelerated in the corona travel downwards inside magnetic loops, thus marking footpoint sources in dense chromospheric plasma. Coronal X-ray sources are prominently visible at lower energies below ~10 keV are usually due to thermal bremsstrahlung, and sometimes also to the presence of accelerated electron populations. The looptop sources are believed to be connected to the process of energy release in flares, and some models invoke magnetic reconnection at the looptop, where the X-ray emission is a consequence of the plasma heating and particle acceleration that may result from that process.

Evidence for accelerated electrons at the looptop

We analysed four well-observed events in which the common loop structure could be identified in HXR: two footpoint sources at higher photon energies and a looptop source at lower energies. For these flares, a non-thermal source at the looptop was also observed at energies above 20 keV. Using RHESSI imaging spectroscopy techniques it is possible to estimate the rate of accelerated electrons flowing through the top of the flaring loop and also into the chromospheric footpoints to account for the observed photon spectra. We have obtained X-ray spectra of the coronal and footpoint sources and fitted them with thin- and thick-target models, respectively. The thick-target model directly provides the electron rate NFP necessary to explain the observed footpoint emission. To obtain the electron rate at the looptop source NLT from the thin-target model, we need to infer the properties of the coronal target: the length of the non-thermal looptop source L, which can be measured from RHESSI maps given certain care, and the thermal plasma density n, which can be inferred from the thermal component of the HXR spectrum.

Figure 1: Imaging spectroscopy method to analyse the photon spectra produced at the coronal looptop source and at chromospheric footpoint sources.

In the classical thick-target model with near-instantaneous acceleration, where accelerated electrons stream freely from the acceleration region at the top of the loop down to the chromospheric footpoints, one would expect that the electron rate on both regions would be the same, i.e. their ratio would be close to unity. The selected flares can be interpreted as having a standard geometry with chromospheric HXR footpoint sources related to thick-target X-ray emission and the coronal sources characterised by a combination of thermal and thin-target bremsstrahlung. Using imaging spectroscopy techniques, we deduce the characteristic electron rates and spectral indices required to explain the coronal and footpoint X-ray sources. We found that, during the impulsive phase, the electron rate at the looptop is several times (a factor of 2 − 8) higher than that at the footpoints. Our results suggest that the number of electrons accelerated in the looptop is larger than needed to explain the precipitation into the footpoints. For these flares, it seems that there are "too many" electrons at the looptop, implying that electrons accumulate in the looptop. 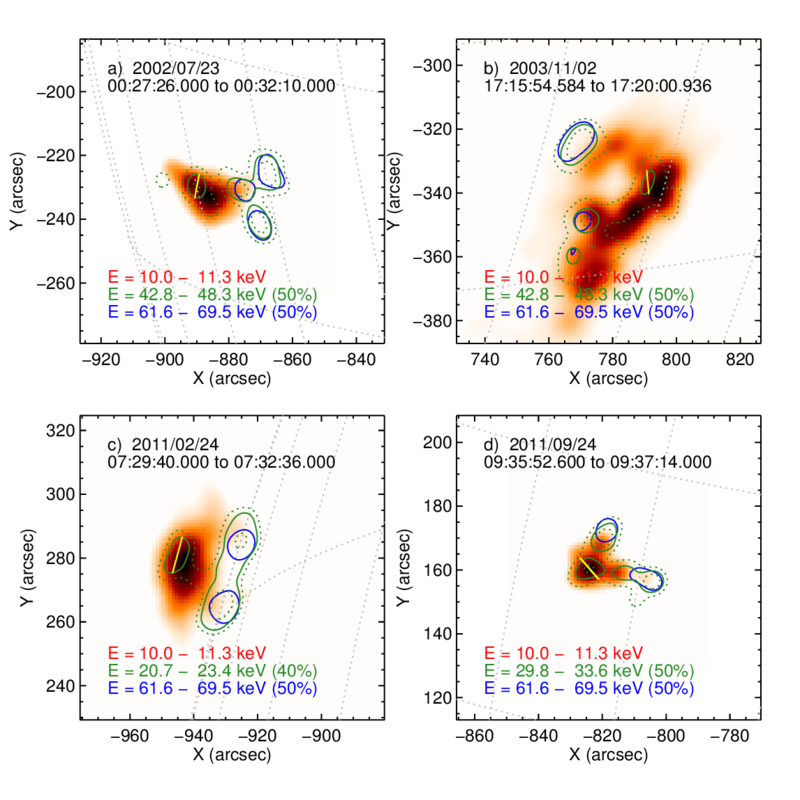 Figure 2: RHESSI maps for the four flares analysed, showing the coronal looptop thermal source at 10 keV (red), the chromospheric footpoints at 60-70 keV (blue contours) and non-thermal coronal source (green contours) at the photon energy they appear in each flare.

Our conclusion is that the accelerated electrons must be subject to magnetic trapping and/or pitch-angle scattering, keeping a fraction of the population trapped inside the coronal loops. Our results (Ref. [1]) suggest that the magnetic trapping should not be too strong and, at the same time, favour scattering with mean free path about 2-8 times smaller than the size of coronal source. These findings put strong constraints on the particle transport in the coronal source and provide quantitative limits on deka-keV electron trapping/scattering in the coronal source.

Retrieved from "http://sprg.ssl.berkeley.edu/~tohban/wiki/index.php/Too_few%3F_Too_many%3F"
Category: Nugget
Facts about Too few? Too many?RDF feed