SDO light curves and images in the extreme ultraviolet (EUV) suggest [ref. 1] that in some "solar eruptive events" (SEEs), a second stage of heating can occur an hour or more after the first. Earlier work [ref. 2] had attributed similar late peaks seen in the EUV light curves from STEREO/EUVI to the cooling of the plasma heated to higher temperatures during the initial energy release. In one well-observed event seen with both STEREO A and B, this earlier work had estimated a conductive and radiative cooling time of ~40 minutes, which the authors argued was consistent with the observed delay of ~1 hour between the soft X-ray and EUV peaks. The new interpretation throws this into doubt; Ref. [1] asserts that this could not possibly be the explanation in at least one case. The hot plasma at ~2 MK that produced the second-stage peak in the SDO/EVE light curves was revealed by the SDO/AIA images to be from a different location than the plasma in the first stage, and hence could not have resulted from the cooling of the initially heated plasma. 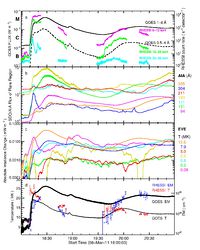 Fig. 1. RHESSI, GOES, AIA, and EVE light curves of the 2-stage SEE on 8 March 2011. Also shown in the bottom panel are the temperatures and emission measures obtained as a function of time from RHESSI and GOES spectral data.

We report here on an event on 8 March 2011 with similar strong evidence for a second stage of energy release high in the corona. In this event shown in Figure 1, the second-stage energy release was seen as a second peak in the GOES X-ray light curves, showing that the plasma was heated to some 15 Mk at that time, almost the same temperature as the plasma heated during the first stage nearly two hours earlier. RHESSI spectral analysis confirms the similarity of the temperatures with ~20 MK for the first peak and 15 MK for the second (shown in Fig. 1, bottom panel). The EVE curves of the change in irradiance above the preflare level shown in the third panel from the top in Fig. 1 also show the second peak at the two highest temperatures of 8 and 12.6 MK. AIA images throughout this event show that the second-stage heating occurred at a much higher altitude in the corona than the first, again confirming that it was not the result of cooling from the first stage. 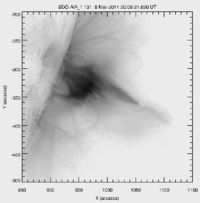 Fig. 2. Still from AIA movie in the 131 Angstrom passband at 20:06:22 UT showing the remarkable similarity to the classical picture of X-point magnetic reconnection.

Another remarkable aspect of this SEE is the visual appearance of magnetic reconnection revealed by the the AIA movies during the second stage of energy release, particularly in the 131 Angstrom passband. First, a rapid ejection of hot plasma was seen starting high in the corona and moving out of the field of view in less than ten minutes. This was followed by perhaps the clearest evidence yet for magnetic reconnection in the corona. This is best seen in the movie in the AIA 131 Angstrom passband that you can download from the following location: AIA 131 Angstrom movie. Fig. 2 shows an image when the reconnection was well developed. A fine bright line appeared at the start of the second peak followed by what certainly looks like a classic X-point reconnection with initially turbulence below, and later the appearance of rapidly falling new bright loops. Emission above the X-point was much fainter but suggested that hot plasma was also driven to higher altitudes at the same time. The whole sequence, lasting over an hour, had the same basic appearance as the classic model of magnetic connection at an X-point with newly connected field lines pulling rapidly away both above and below. There was minimal evidence for any particle acceleration at this time from the RHESSI light curves at >20 keV. However, any bright hard X-ray footpoints would most probably have been occulted since the flare ribbons were mostly over the limb. This is revealed by the 195 Angstrom image in Fig. 3 taken by STEREO-B from its perspective at ~90 degrees from the Earth-Sun line at nearly the same time as the AIA image in Fig. 2. Unfortunately, the reconnection, so clearly seen in the AIA movie, is not evident in the relatively low-cadence STEREO images. 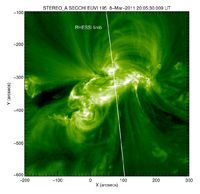 Fig. 3. Image from STEREO_B in the 195 Angstrom passband with the disk visible from the Earth to the left of the line marked "RHESSI limb."

This well-observed SEE shows clear evidence for two stages of energy release separated by almost two hours. Both the high temperature and higher altitude of the second-stage plasma preclude the possibility that it was merely the same plasma heated during the first stage that had cooled sufficiently to emit in the lower temperature AIA passbands. There was little indication during the first stage that a second stage was imminent although the initial eruption did seem to stall as if it was either too weak to drive the ejection against the Sun's gravity or that there were overlying magnetic fields preventing the plasma from escaping.

This SEE also shows, during the second stage, strong visual evidence for magnetic topology changes, plasma turbulence, and newly formed retracting magnetic loops. The overall appearance during this phase is remarkably similar to the classic picture of X- or Y-point magnetic reconnection. Further analysis is required to establish if observations at other wavelengths support this interpretation.

Yang Su, formerly at Goddard Space Flight Center as a postdoc with The Catholic University of America, now at the University of Graz, Austria.

Brian Dennis is the RHESSI Mission Scientist at Goddard.