Two phases of X-ray emission in a solar eruptive flare

Now it is a well known fact that solar eruptive phenomena are powered by the sudden release of excess energy stored in the magnetic field of solar corona. There is also a near-universal consensus that in an eruptive event this stored energy appears during large-scale magnetic reconnection. Decades of observations of the Sun from ground-based telescopes and satellites have revealed many important observational features during flare evolution which support the reconnection scenario. These features are: separation of ribbon-like bright chromospheric structures, the motion of bright kernels in HXR images, and the upward movement of coronal X-ray (or loop-top) source followed by the evolution of low temperature post flare loops. The observations made by the Reuven Ramaty High Energy Spectroscopic Imager (RHESSI) have revealed many new aspects during the rise phase of flare evolution. Lin and co-workers studied the HXR emission of X4.8 flare on 23rd July 2002 and discovered a powerful coronal non-thermal source before the impulsive phase. Another new RHESSI phenomenon is the appearance of downward motions of X-ray loop-top source in the early rise phase of a flare, as first reported by Sui & Holman in an M1.2 flare on 15th April 2002. In a few recently studied events, it has also been found that during the period of descending loop-top source motion, the distance between the conjugate HXR foot points decreases.

The RHESSI observations of the GOES M7.6 class flare on 24th October 2003 provided us with an excellent opportunity to study various aspects of the flare evolution with imaging and spectroscopic analyses, which we describe briefly in this Nugget. The TRACE images of flaring region in 195 and 1600 Å channels and Hα filtergrams during the decay phase supplemented RHESSI data for this study. 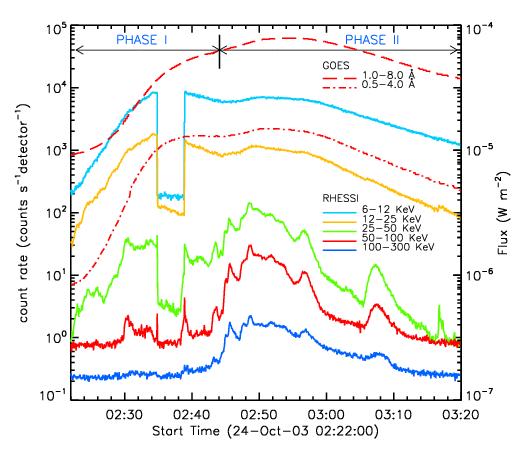 Figure 1 shows GOES and RHESSI light curves of the flare in various energy bands. The HXR emission during the initial phase (indicated as the 'Phase I' in Figure 1 on the horizontal line at the top) comes from a loop-top source seen in projection above the limb of the Sun. Figure 2 shows a few representative X-ray images showing loop-top and footpoint sources superimposed on co-temporal TRACE 195 Å images. The downward motion of the X-ray loop-top source is evident from these images (see top row of Figure 2). The descending loop-top source is observed for ~11 minutes and moves with an average speed of ~15 km/s. About 5 minutes after the appearance of X-ray loop-top source, an intense brightening started at the top of TRACE 195 Å loops, located below the X-ray loop-top source. Earlier studies have shown that such a brightening in TRACE 195 Å images correspond to an Fe XXIV contribution from plasma at a temperature around 15-20 MK (one MK being a million degrees), rather than the nominal lower-temperature contribution at about 2 MK. The EUV loop system with bright loop-top undergoes contraction with similar speed of downward motion as that of X-ray loop-top source.

The HXR emission (>25 keV) during the main phase of the flare (indicated as the 'Phase II' in Figure 1) originated from two flare kernels observed on the solar disk. These kernels lie over the two bright flare ribbons visible in TRACE 1600 Å and Hα images. Therefore, we recognize these two sources as the footpoints of a loop system. These footpoint sources can be understood in terms of thick-target model discussed in an earlier nugget. The X-ray loop-top source now shows an upward motion below which Hα and UV post flare loop system evolves. This picture is consistent with the standard flare model.

Finally, we make a note of the X-ray spectral evolution. The spectra during the first phase of the flare suggest hot thermal emission with temperatures T > 25 MK. At X-ray energies E > 20 keV, the spectrum shows a steep power law with photon spectral index γ > 7. During the second phase of the flare, the spectra show quite different characteristics: emission up to >200 keV is detectable at the footpoints, and the spectrum at high energies follows hard power laws (γ = 2.5-2.8).

RHESSI observations have revealed a new phenomenon during the rise phase of flares in which the X-ray loop-top source exhibits a downward motion (see also an earlier Nugget on coronal implosion). In a few events, RHESSI observations have also confirmed the converging motion of HXR footpoints during the rise phase, simultaneously with the downward motion of loop-top source. The explanation of 'rise phase' is beyond the scope of standard model of solar flares. The observations we describe here suggest that the classical picture of flares described in standard flare model is valid after the impulsive phase, when we observe the upward motion of loop-top source and increasing separation of HXR footpoints. The flare event of 24th October 2003, presented in this Nugget, is one of the clearest examples of this scenario. In the following paragraphs we have made an attempt to discuss the RHESSI perspective of 'rise phase' of flare in terms of a specific model called the "rainbow reconnection model".

The rainbow reconnection model of Somov considers two kinds of large-scale photospheric flows before a large flare. First, the shear flows, which are parallel to the photospheric neutral line (where the polarity reverses), increase the length of field lines in the corona and, therefore, produce an excess of magnetic energy. Second, the converging flows, i.e., the flows directed to the neutral line, create the pre-flare current layers in the corona and provide an excess of magnetic energy sufficient to produce a large flare. 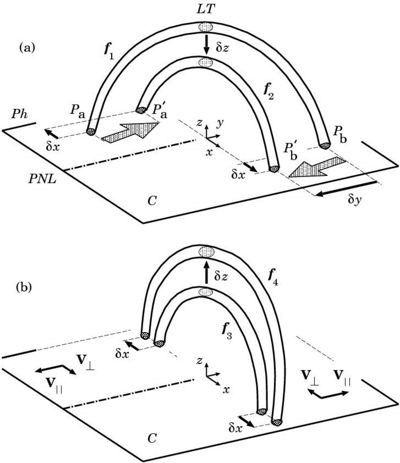 Figure 3: Schematic representation of the flare evolution in terms of the rainbow reconnection model. (a) First phase: rapidly decreasing footpoint separation dominates an increase of the distance between the footpoints. (b) Second phase: bright HXR kernels separate in opposite directions from the neutral line and from earch other. The loop-top source moves upward.

In Figure 3, we show a schematic representation of the flare evolution. To understand the motion of loop-top and foot point sources, we consider the three-dimensional magnetic reconnection at a separator in the corona. In figure 3(a) we depict the process in which the main role of reconnection is to release the excess of magnetic energy generated before a flare as a result of photospheric shear flows. We call this process as magnetic shear relaxation. The photosphere shear mainly dominates in the vicinity of the neutral line. As a consequence of magnetic shear relaxation, a magnetic loop f1 evolves into loop f2 and therefore coronal HXR source shows an apparent downward motion. During this stage the footpoints of the magnetic loops show larger movement parallel to photospheric neutral line (i.e., δ y >> δ x) and we may observe converging motion of HXR foot point sources.

Figure 3(b) shows another situation related to the second phase of the flare which is consistent with standard flare models. Here the flare involves reconnection of the magnetic field lines whose footpoints are located at larger distances from the neutral line and, therefore, have a smaller shear or practically none. As the reconnection involves field lines rooted successively apart from the PNL, the X-ray loop-top source shows the upward motion and HXR foot points separate from each other.