In the standard description of flare hard X-ray emission, an unspecified mechanism accelerates large numbers of electrons in the corona. These then penetrate into the lower atmosphere, creating "footpoint" sources of emission across the spectrum. These beams require return currents to balance the charge distribution. Co-spatial return currents have been proposed for this purpose. The return current locally neutralizes the charge build-up and cancels the magnetic field induced by the beam of accelerated electrons. Return currents solve the so-called number problem and the associated current stability problem. In this Nugget we describe the constraints on the flare-nonthermal electron distribution and its associated return current using RHESSI x-ray imaging-spectroscopy observations of many flares (Ref. [1]) . 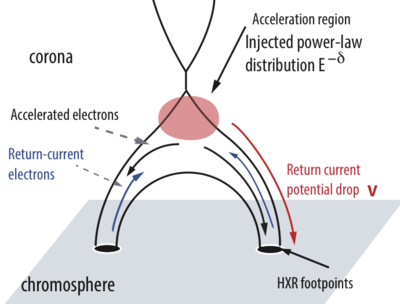 The flares studied in this work exhibit strong spectral flattenings of the x-ray spectrum at lower energies (a few deka-keV) during the HXR peak times. The magnitude of the flattening cannot be explained by mechanisms such as non-uniform ionization, isotropic Compton back-scattering, or pulse pile-up alone (see details in Ref. [1]).

We consider a model (Figure 1) based on coronal magnetic loops, with the following assumptions:

Are the beam and the return current stable?

We have applied this model to a large number of flares, including some "early-impulsive" events (Ref. [2]) for which the non-thermal hard X-ray emission can be detected at lower energies, and others with clear flattening at low energies (the "spectral break") was clear. In each case we have evaluated the criterion for stability against the generation of electrostatic ion-cyclotron waves as well as ion acoustic waves and the Buneman instability, for which the threshold is about 2ve. For each case we can evaluate the drift velocity, assuming the beam current to be exactly balanced by the return current, and compare that with the known instability threshold (Figure 2). The comparison is made for separate estimates of upper and lower limits for the cutoff energy of the electron spectrum.

Figure 2: The ratio of the return-current drift velocity to the ion acoustic speed as a function of the electron to ion temperature ratio for the upper and lower limits estimated for the cutoff energy Ec. The X-axis shows different assumptions about the ratio of electron to ion temperature in the source. In most cases, the return current drift velocity is too low to generate electrostatic ion cyclotron and ion acoustic instabilities

The resistivity is enhanced in most cases, if Ohm’s law is valid (figure 3). Current-driven instabilities are not the cause of that enhancement (figure 2). It is possible that the resistivity does not need to be enhanced, if part of the return current is carried by freely accelerated electrons. Ohm’s law is not valid then for calculating the resistivity, and the return-current electric field is on the order of the Dreicer field, which means runaway electrons cannot be neglected.

Figure 3: The derived resistivity is enhanced by more than 2 orders of magnitude in most cases. The figure shows scatter plots of the derived resistivity in the upper (left) and lower (right) limits of the low-energy cutoff vs. the classical Spitzer resistivity. The error bars are the 67% confidence intervals. The two dashed lines on the left (right) panel are where ηspitzer = η (Ec max) and η(Ec max)= 104 x ηspitzer (η(Ec max)= 107 x ηspitzer). The green horizontal lines in both panels show the Spitzer resistivity of a 2 MK plasma. Since most of the data points are higher than the green line, it means that even if the beam is streaming along a cooler loop than the one observed with RHESSI, which is most likely from previously heated plasma, the resistivity values are still enhanced in most cases, as compared to Spitzer values.

A main conclusion of the statistical analysis is that if the flattening is caused by return-current energy losses, then return currents are unlikely to be carried by only the bulk of the thermal distribution (electrons with velocities near the thermal speed, ve), but if the return current is carried by the bulk thermal electrons, the resistivity must be enhanced by a process different from the usual current-driven instabilities, namely, ion acoustic, electrostatic ion cyclotron, and Buneman instabilities. This was inferred from the result that the drift velocity of the return current was found to be lower than the threshold for generating these instabilities in all cases using the upper limit of the low-energy cutoff Ec, and in 506 out 528 cases using the lower limit of Ec.

Based on the results that these current-driven instabilities cannot explain the enhanced (anomalous) resistivity values, and that the return-current electric field is on the order of the Dreicer field, when the resistivity is classical, we will examine in an upcoming paper a scenario where the return-current carrying electrons are in the runaway regime, and whether the need for anomalous resistivity can be abandoned.