Type III solar radio bursts are widely believed to be caused by electron beams accelerated away from the Sun during solar flares. Fast electrons stimulate oscillations in the ambient plasma, which in turn produce radio emission. This plasma emission occurs at specific frequencies that are proportional to the square root of the ambient electron density. The plasma density in the solar corona generally decreases outwards from the solar surface. The emission frequency is therefore related to the height that corresponds to the requisite background density, and type III bursts are characterized by a rapid drift to lower frequencies as the beams move outward.

A series of type III bursts have recently been observed to exhibit a curious splitting behavior by the Murchison Widefield Array (MWA), a new and very powerful low-frequency radio interferometer (Ref. [1]). In these bursts the source region splits from one component at higher frequencies (smaller heights), into two increasingly-separated components at lower frequencies (larger heights). The two components also repetitively move apart at a few tenths of light speed in observations at individual frequencies. This motion, shown in Figure 1, lasts around 2 seconds and occurs many times over several minutes.

Extreme ultraviolet (EUV) jets observed by the Solar Dynamics Observatory/AIA immediately follow the radio bursts. These thermal plasma ejections and the type III electron beams follow particular trajectories within the coronal magnetic field, and previous studies have demonstrated alignment between the two (e.g. Ref. [2]). The EUV jets trace out a region where the magnetic field diverges rapidly around a null point. This configuration is a type of quasi-separatrix layer (QSL), generally meaning a region where the field connectivity changes drastically within a small area. Several common features of null point QSLs are identified in Figure 2, which compiles all of the EUV jet trajectories into one persistence map.

Figure 2: A) Maximum value persistence maps for AIA 304 (top) and 171 A (bottom). B) Column A subtracted by median backgrounds. C) A further-processed version of Column B (top) with annotations labeling several QSL features. Such images compile all of the EUV jet trajectories from immediately after the radio bursts by plotting the maximum value a given pixel achieves over a 20-min period. The flare, SOL2015-09-21 (C8.8), was well observed by RHESSI (Ref. [1]).

Overlaying type III burst contours on the EUV image (Figure 3, left) shows that the two radio components are distributed on either side of a separatrix spine, a magnetic field line which connects two magnetic nulls. In Figure 3 (right), the EUV structure is used to sketch a 3D field configuration that also satisfies the connectivity required by the radio sources. In this interpretation, electrons travel simultaneously along the red field lines, which forces the beams to diverge with increasing height. This naturally produces the much larger angular extent of the radio source at lower frequencies (larger heights). It also produces the splitting motion observed at individual frequencies because adjacent beams reach the same height and corresponding ambient density at slightly different times, creating an apparent motion that's not aligned with the beam trajectories. 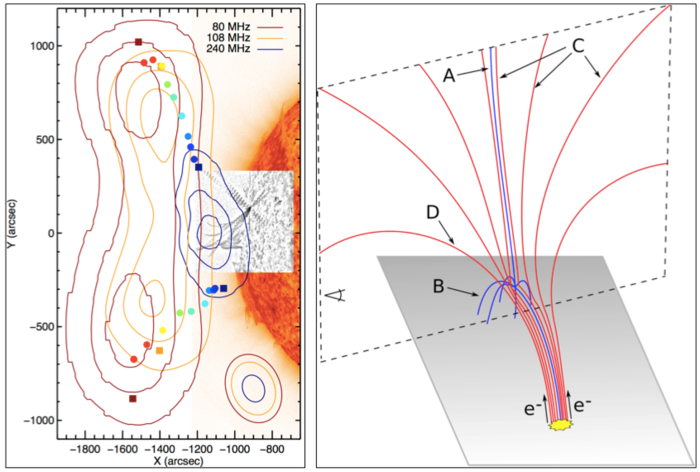 Figure 3: Left: MWA type III burst contours overlaid on the persistence map from Figure 2. Pairs of colored dots represent the angular extent of the MWA source region in all 12 channels, with the squares from left to right corresponding to the reddish brown (80 MHz), orange (108 MHz), and dark blue (240 MHz) contours. Contour levels are at 20, 50, and 80% of peak intensity, taken from a period when the source regions are maximally extended around 05:17:26.6 UT, and the colored ellipses represent the synthesized beams at each frequency.
Right: Cartoon interpretation of the magnetic field configuration inferred from the EUV jet morphology and radio source regions. The yellow region denotes the flare site, which is connected to a neighboring region with open and closed QSLs. Red field lines form a separatrix curtain, with the field closest to the center being open to interplanetary space. The blue field lines represent the closed separatrix dome, with a single spine field line that crosses the dome through a magnetic null point. Electrons travel along the diverging field lines of the separatrix curtain to produce the radio source structure and motion. Capital letters correspond to features apparent in the EUV observations (Fig. 2).

The novel dynamics of these type III bursts can be interpreted in terms of diverging magnetic fields, as inferred from EUV jet observations, and additional information about the field connectivity is provided by the radio images.