Solar flares happen frequently and spectacularly, as these nuggets testify. Human knowledge of this remarkable (and still unexplained) phenomenon is rather new. In 1859, Carrington, a typically English, and financially well-enough endowed, amateur astronomer observed a powerful solar flare by accident; he (and R. Hodgson, another observer) > knew they were onto something important. This first flare must have been extremely bright, because in 1859 there were no specialized filters and no X-rays either - Roentgen was still in the future. Carrington was circumspect in his description of the event ("...the brilliancy was fully equal to that of direct sun-light..."). The other observer, Hodgson, was much more effusive: he said that the flare was "..very brilliant... much brighter than the Sun's surface... most dazzling... compared to the dazzling brilliance of the bright star alpha Lyrae..."; either this was indeed an exceptional flare, since no other flare could be described this way, or else Hodgson was given to overstatement.

Solar observations have come a long way since Carrington's original flare observation; we now have observatories in space. The sesquicentennial year (2009) of Carrington's flare is coming soon. By then we should be in the rising phase of the next solar cycle. In particular RHESSI gives us the best-ever hard X-ray data, and " TRACE gives us the first high-resolution optical and UV observations of these events.

It is known that a close association exists between white-light flares and X-rays (energetic X-ray flares are more likely to have white-light emission). This association could have been known in 1859 if only Roentgen had been more prompt in discovering X-rays.

The TRACE "white light" data differ from all previous observations, in that a special UV-sensitive coating on its CCD allows it to observe far into the ultraviolet. This part of the spectrum has never before had adequate photometric observation. The importance of this UV response is that TRACE images capture, for the first time, the bulk of the radiant luminosity of a solar flare. Another recent pioneering observation, the SORCE total-irradiance measurements, does something similar and was described in a previous RHESSI nugget. Figure 1 is an example of TRACE images of a white-light flare: 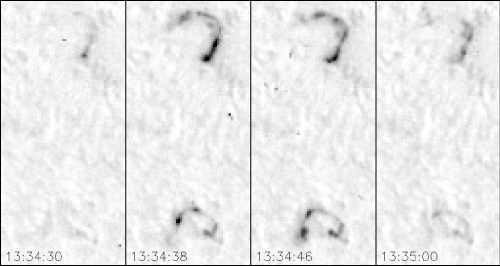 Figure 1: CME kinetic energy derived from LASCO images plotted against the energy of various components of the associated flares as indicated. The diagonal line is the line of equality between the CME and flare energies.

These images cover a time interval of 30 sec; the vertical scale is about two arc min and the emission appears as two highly warped "ribbon" structures. The extraordinary time-and-space variability ("intermittency") can be seen better by clicking on the image; the full view shows the individual 0.5 arc-sec TRACE pixels.

Is white light different, and where is the energy?

Below (Figure 2), we compare the RHESSI hard X-rays and TRACE white light in terms of time variations: 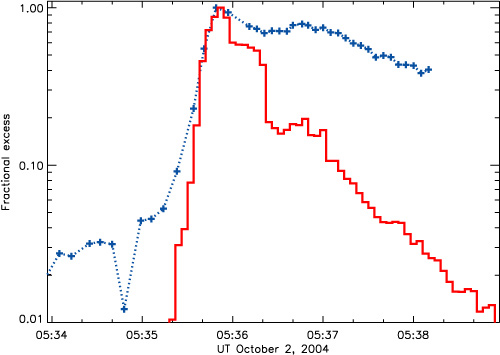 This log-scaled figure is a little deceptive, but it shows clearly the exact times of hard X-ray integrations (red) and white-light snapshots (blue). As has been seen many times before, the light curves have striking similarities (a common peak time, within the relatively high resolution of these data) but intriguing discrepancies (the light curves don't agree well either early or late, ie outside the "impulsive phase"). There has also been a single ground-based white-light flare observation with really excellent time resolution, and with it Don Neidig found hints of interesting tiny timing differences.

We believe that the closer agreement during the impulsive phase is telling us that two sources exist: the "true" white light, which certainly includes UV as well, and a purer UV emission. Presumably these are close together in the lower solar atmosphere. The figure below shows that these components can be separated. 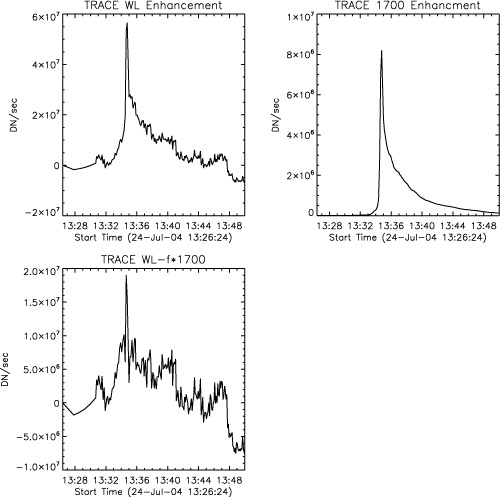 The discussion above results from a study of 11 events commonly observed by RHESSI and by TRACE. Selected on the basis of overlap, they include only C and M-class flares, not the really huge ones visible in the total irradiance. In the future we plan to take advantage of the RHESSI images to try to learn more about the physical mechanisms.

In the meanwhile, this study has shown that even for medium-sized flares, a tremendous amount of energy - well-correlated with hard X-rays and the impulsive phase, appears in the visible and UV continua seen in the TRACE snapshot images. These images, for the first time, show the flare bolometrically, capturing the bulk of the radiant energy. Perhaps the bottom line here is that we need still higher spatial and temporal resolution really to learn where and when this energy appears.

Biographical note: Hugh Hudson and Tom Metcalf are solar physicists in Berkeley and Boulder, respectively. They have been interested in white-light flares for about four and two decades, respectively.