To get a complete picture of what is going on in a solar flare one has to look at different wavelengths of the electromagnetic spectrum. Hard X-rays (HXR, typically above 20 keV) tell us predominantly about the non-thermal electrons accelerated in a flare: the number of electrons, their spectrum, and where they stop in the chromosphere. Soft X-rays (typically below 10 keV) reveal information about the hottest thermal plasma. Ultraviolet (UV) and extreme ultraviolet (EUV) observations in different wavelengths give additional information about the hot temperature structure of a flaring atmosphere. Finally, there is "white light" emission. Discovered in what is believed to be the very first (and the most powerful) solar flare ever observed, the famous Carrington event, this emission proves to be rather elusive and was long believed to be only present in the most energetic events. Although more recent observations suggest its presence also in weaker flares, it is still observed only occasionally, and the spatial location and the emission mechanism itself is still subject of debate. Combining RHESSI observations of HXR sources with SDO/AIA and HMI, we can now find not only the relative positions, but the heights of footpoint sources at different energies/wavelengths above the photosphere (Ref. [1]). The Sun collaborated nicely by providing a medium-sized white-light flare near the limb on February 24th 2011 ~ 07:31 UT. This made such a study possible. Figure 1 shows an overview of the flare. The event displayed three hard X-ray peaks. Below we focus on the first peak, when AIA was not saturated as much as later in the flare. During this time, there was also only one strong hard X-ray footpoint, which makes the overall HXR analysis easier. 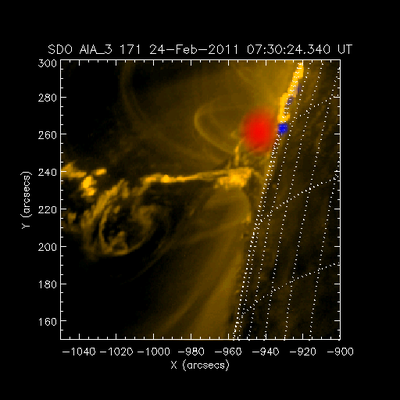 Finding the relative height of X-ray, EUV and WL sources

For this, we used the same trick as described in Ref. [2]. In the classical thick-target flare model, electrons with higher energies will penetrate deeper into the chromosphere. Therefore, the radial position of the observed X-ray footpoint is energy-dependent and the chromospheric density determines the relationship between position and energy. Finding the radial positions in itself is no minor task, but X-ray visibilities analysis helps greatly. The visibilities allow us to find the source position (Gaussian-weighted centroid) with sub-arcsecond accuracy. Now, assuming an exponential density profile, we can fit the observed position-vs-energy relationship. This fit also maps all radial positions to corresponding heights above the photosphere. Figure 2 illustrates this process in a simplified way. 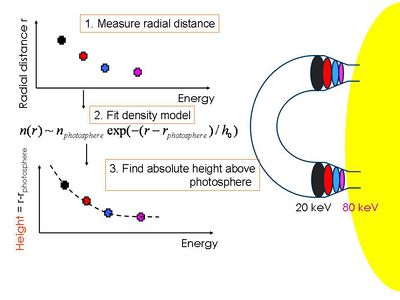 We can now map the position of any source to a corresponding height. Aligning the RHESSI and SDO images, we can directly compare the source heights in HXR, EUV and HMI continuum. The result of this is shown in Fig. 3. 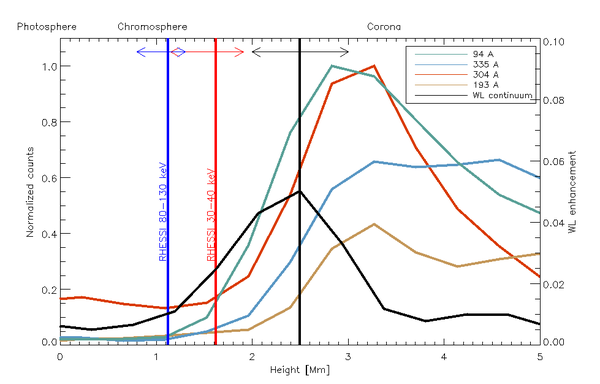 Figure 3: Height of hard X-ray, EUV and white-light sources above the photosphere. The arrows indicate the uncertainty in the height. Only some of the AIA channels are shown, since the others were saturated.

As Fig. 3 shows, the white-light emission (HMI continuum) is clearly observed to lie above the 30 - 40 keV emission, even taking all possible uncertainties regarding the relative positions into account. It appears at the height where plasma is probably partially or completely ionized, suggesting free-bound and free-free continuum emission. This interpretation is supported by the EUV emission, representing temperatures > 1 MK, lying higher still than the white-light emission. Further, it is evident that the emission cannot be caused by the highest-energy non-thermal electrons producing the HXR footpoint emission. Because of the coronal source emission it is not possible to image RHESSI footpoints at energies lower than about 20 keV, but if we could, we would observe a 12 keV source at the height of the WL emission. Based on flare energetics, the WL emission is likely to be powered by lower-energy electrons - as low as 12 keV - which generally do not penetrate deep into the solar chromosphere.