Solar flares are among the most exuberant phenomena observed in the Solar corona. These fast transient energy releases can efficiently accelerate particles to high energies: electrons to 10s of keV in a fraction of a second and protons to 100s of MeV in around a second. As in situ measurements of the coronal plasma are impractical, we have to infer the energisation process from remote observations of the flare, for example with RHESSI. This is because the x-rays RHESSI sees are believed to come from bremsstrahlung radiation of the energised electron population and so help to illuminate the acceleration mechanism.

To try and make sense of these observations (for instance this or that), the medium of cartoons is often used to try and model the process. Of course we still need to include accurate physics, otherwise it would be the results of another Hanna you would be looking at here. The "standard" flare cartoon model that has evolved from some of these observations. In this model you envision an acceleration site high in the corona; from this "black box" energised particles propagate along the coronal magnetic field. They then interact with the denser coronal material lower down to produce the radiation we observe. The mechanism often thought to occur at the acceleration site is magnetic reconnection. Reconnection is the process whereby oppositely directed magnetic field lines merge, allowing the stored magnetic energy to be liberated to the coronal plasma, energising the particle population. The energy transfer, in one scenario, can explicitly occur via electric fields that will directly energise the particles close to where the reconnection occurs. In simple 2D geometries reconnection happens at a current sheet or an X-point and it is the later situation we will be looking at in this nugget (hence the title).

The simple model we adopt here is shown in Figure 1 and uses a fixed field configuration. We have the 2D X-point magnetic field configuration placed high in the model corona, with the field scaled by some photospheric footpoint strength, occurring some distance along the separatrices (thicker black lines). This field is invariant in the z-direction and so we have a "2.5D" model: the X-point (or neutral point) where the magnetic field disappears in the x-y plane extend to form an X-line (neutral line) in the z-direction. In this direction there is an applied electric field that will energise the particles and also drifts particles in to the X-point from the left and right and away into the top and bottom. 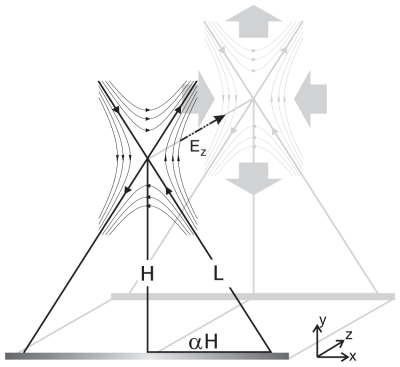 Our model here uses the simple test particle approach in which you follow a single particle (proton or electron) through the fixed field configuration, close to the X-point, to see how it behaves and how much energy it gains. Some of these test particle orbits can be seen in Figure 2 (clicking on the orbits will open a new window with more detailed information about it and a 3D Java animation that allows you to pan and zoom the orbit). These are all proton orbits and have different initial starting positions in phase space. 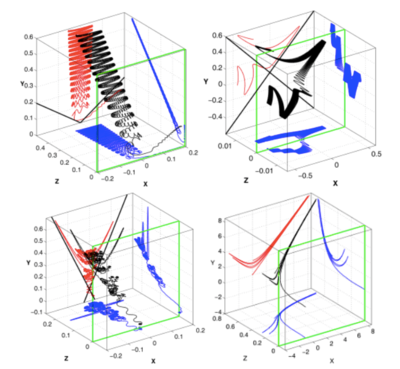 Figure 2. Some example test particle orbits (protons after 1 second) in the reconnecting X-point. These orbits are from different initial positions in phase space and in the last two the angle between the separatrix and the z-component of the magnetic field are respectively change.

Although the individual orbits are interesting we are more interested in the energy spectra of a distribution of test particles. This is because RHESSI can observe the photon spectra of flares and can relate these to the electron spectra. To do this we send a distribution of test particles (in this case 10,000 electrons, randomly positioned close to the X-point in the x-y plane and with an initial Maxwellian distribution at 1 MK) one at a time through the system, and then calculate their final energies (after 0.1 second). The energy spectra we find as we change different parameters of the initial field configuration are shown in Figure 3.

Figure 3. The different electron energy spectra one obtains for a population of 10,000 electrons after 0.1 seconds, as the initial applied electric field changes (first figure), the angle between the separatrices (second figure) and the strength of the parallel magnetic field (last figure). In the last two graphs the black energy spectrum is the initial distribution.

The first graph shows the different electron energy spectra we get as we change the magnitude of the electric field. Obviously with a large field more electrons are energised, and to higher energies. Once we have 1 V/m or more we get electrons to observable energies and the energy spectrum start to change shape at higher energy, with an excess of highly accelerated particles. In the second graph we keep the electric field fixed but change the angle between the magnetic separatrices (smaller α this means the separatrices are closer in the outflow direction). The energy spectra change slightly when we close the separatrices in, most notably the "excess bump" at higher energies moves to lower energies. In the last graph we have the electric field fixed and the separatrices perpendicular again, but this time introduce a component of the magnetic field in the z-direction (represented by κ). This gives the particles something to directly gyrate along in the direction of the electric field and so unsurprisingly with larger κ more particles are energised to high energies. However the maximum energy reached does not change. Something that does clearly change is the shape of the energy spectrum which ends up being a power-law. Another feature of this z-component of the magnetic field is that it preferentially ejects the particles out along different separatrices depending on the particle charge. This means that the protons would end up at a different footpoint from the electrons, a rather observable feature.

This model shows that we can energise electrons up to observable energies (10s of keV) and quickly. The energy spectra obtained also clearly differ when the initial configuration of the field changes, resulting in different populations of energised particles. However if we were to make this model more physically accurate it would likely reduce the efficiency of the energy transfer. For instance the magnetic field generated by the current of accelerated particles themselves would deform the X-point field configuration, changing its ability to energise the particles. A bigger problem with this model however is the assumption that we have a large 2.5D configuration in which the bulk of the energisation occurs in the small region close to the X-line.

Despite these issues the above work clearly shows the merit of the test particle approach: its simplicity makes the fundamental aspects of the system readily apparent. And if we use the test particles to explore more realistic 3D fields in a self-consistent manner then we should have an even better understanding of the rapid energisation process in Solar flares.

Biographical note: Iain Hannah is a member of the RHESSI group at UC Berkeley.