RHESSI is in low Earth orbit, and its altitude gradually decreases via atmospheric drag. As RHESSI's orbit tightens, so does that of every satellite and piece of junk in Earth orbit. Thus the lower altitudes become more and more congested. The probability of collisions has been increasing rapidly recently. In the meanwhile, the dominant cause of orbit decay is the drag force imposed by the Earth's amosphere, which inflates when solar activity is high as a result of heating from the increased UV flux. The solar microwave flux index F10.7 is a proxy for this process. Figure 1 shows the orbital altitude of RHESSI and the F10.7 index, and Figure 2 shows the first time derivative of orbital altitude, which should (and does) correlate more closely with F10.7. Most of the remaining changes in altitude are due to atmospheric changes caused by geomagnetic activity. 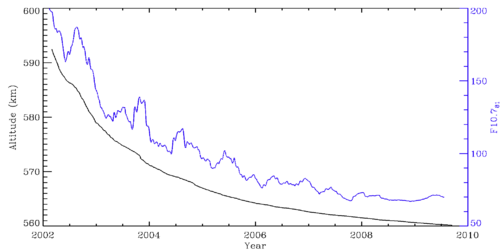 Figure 1: The RHESSI orbital altitude, extracted from the "two-line elements". The colored line shows the F10.7 index, which is a good proxy for the inflation of the Earth's atmosphere responsible for satellite drag. 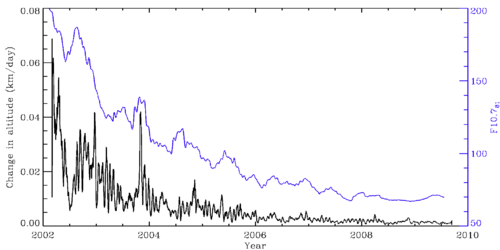 Figure 2: The first derivative of the of RHESSI orbital altitude compared with F10.7.

During the current solar minimum the Sun has had few sunspots, irradiances are at measured lows, weak magnetic fields are measured throughout the heliosphere, and very few flares are being seen. What do we have plenty of? Orbital debris!

The breakup of five satellites in low-Earth orbit (LEO) has significantly increased the number of objects tracked by NORAD. With low solar activity for the past several years, the thermosphere of the Earth has contracted, reducing the frictional drag force that normally cleans some of this debris.

One satellite, the Fengyun-1C, was deliberately destroyed in January 2007, leaving about 2630 pieces still in orbit. Another unique event, the collision of Iridium 33 with Cosmos 2251 in February 2009, had left 1120 pieces of debris in orbit. Two other breakups left pieces in LEO, the explosion of an Arabsat Briz-M booster on February 2007 (67 pieces tracked, many others untracked) and the breakup of Cosmos 2421 for unknown reasons in March 2008 left at least 40 objects that are still in orbit. In only two years almost 4000 pieces of debris were injected into the already crowded environment of low-Earth orbit. Because there are typically 10,000-20,000 objects being tracked in LEO, the breakup of these five satellites increased the number by 20-40%!

The orbital lifetime of these objects increases with decreasing solar activity. NASA’s Orbital Debris Program Office says some of this debris would fall out of orbit in about five years if solar activity returns to the levels of Solar Cycle 23 but if solar activity remains low it could remain aloft for many more years. The current lack of solar activity means the Sun is dimmer in the extreme ultraviolet, which allows the thermosphere to cool and decreases the atmospheric density. Satellites and debris in LEO then see a smaller frictional drag force. The drag force tends to first make the orbit of the object more circular by decreasing the apogee and then contracts the orbit until it falls out of orbit.

Unless they are carefully crafted, satellite orbits precess around the Earth. This means the orbital elements that define a satellite's trajectory change in well-understood ways. You can obtain "Two-Line Elements" that describe how the orbits of most satellites move in space. Here are the RHESSI elements for September 2009:

Although I won’t explain all the terms, the finite number of digits in each parameter limits the accuracy of predicted close approaches between satellites. Timing errors of several seconds result in several km of uncertainty in the predicted trajectory. After an explosive on-orbit breakup, debris moves into new orbital elements. It is lofted to higher apogees and lower perigees. The inclinations are almost randomized, with some of the debris moving into retrograde orbits.

RHESSI is currently at an altitude of about 560 km (a loss of about 35 km since launch.) It is below most of the orbits where the destroyed satellites orbited, but that does not protect from debris. Pieces of Cosmos 2251 have moved into orbits with perigees below RHESSI.

We astrophysicists may forget this solar minimum when sunspots and active regions reappear, but the debris will be there for years to come. An increase in the lifetime of orbital debris is a natural consequence of a solar minimum, enhanced by this one's length and depth. But a radical increase in the number of debris objects is not normal. We should protect our assets in space (such as RHESSI) by cluttering low Earth orbit no more than is necessary to place satellites in orbit and maintain their usefulness.

Retrieved from "https://sprg.ssl.berkeley.edu/~tohban/wiki/index.php/A_Bad_Time_for_Flares_but_a_Good_Time_for_Debris"
Category: Nugget
Facts about A Bad Time for Flares but a Good Time for DebrisRDF feed