A flare in the deep solar atmosphere

By "solar flare," as studied by RHESSI and many other observatories, we mean a sudden energy release detectable as a transient across a wide spectrum of electromagnetic and other radiations. Before the space age, telescopic observations of chromospheric emission (H-alpha) usually classified these events well enough, but nowadays we tend to use GOES soft X-rays (the C,M,X classification) for a similar purpose. Neither of these channels contain a dominant fraction of a flare's luminosity, and of course other effects (waves, particles, flows) necessarily accompany the radiation we detect. The phenomena of flares have a lot of variety but also a lot of commonality; for example, the hard X-ray emission that reflects the major energy in non-thermal particles correlates well with the soft X-ray emission that represents the injection of hot material into the corona.

In this Nugget we report a singular set of observations of a very short-lived GOES event, well-observed by RHESSI and Fermi at high temperatures, which we argue to have taken place in the deepest solar atmosphere. We do not think it is an unusual phenomenon, but an example of something that is rarely noticed - in this case in an analysis done by Brian Dennis as a routine part of checking RHESSI's health.

From this official IAU flare name, one can get the idea that this particular event had to be specified very precisely in time. In fact the duration of the GOES event is only about 15 seconds (FWHM) in the soft channel (1-8 A), very unusual indeed. Figure 1 shows the timing of the event and the RHESSI "image" -- well-observed, but totally unresolved; the image reconstruction only allows the centroid to be established. The duration of a normal flare soft X-ray burst reflects its spatial scale as a determinant of conductive cooling, or of the plasma density for radiative cooling. At a glance one sees that this event is very small, and very dense, or otherwise it would not cool and fade so rapidly. See further discussion below about the AIA imagery of this event in the extreme ultraviolet.

Figure 1: Time series (left) and RHESSI image (right). The time series shows both channels of GOES soft X-rays, plus the Fermi GBM hard X-ray counting rate at high time resolution. The GOES short-wavelength channel (red) suffers from undersampling, but it is enough to suggest the Neupert effect and to suggest a high temperature. The RHESSI image simply shows that the event was unresolved at RHESSI resolution, with dimensions less than about 3 arc sec.

The GOES data shown in Figure 1 come from broad-band sensors, which cannot provide much about the spectrum of the event. Fermi/GBM and RHESSI can do non-dispersive spectroscopy, at low resolution, and RHESSI suggests temperatures (on a thermal model) of order 10 MK, typical of more normal coronal flare events. This is consistent with the GOES two-channel spectral information. This event has a flare-like spectral development.

What was this thing?

As noted, the X-ray data strongly suggest a compact, low-altitude source. We could confirm this by the AIA image morphology, as shown in Figure 2. 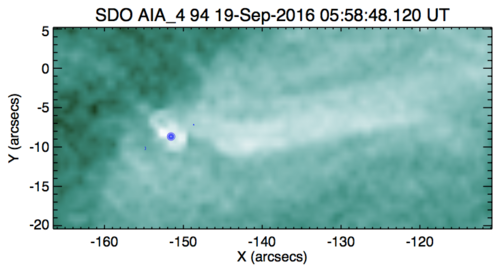 Figure 2: Overlay of the RHESSI contours on just the right AIA snapshot in the 94 A band. This indeed shows the existence of a source too small for RHESSI to characterize, and in fact not resolved by AIA's 0.5 arc s pixels either, although there is a hint of a loop a few arc s long. To the west, one of the elongated features catches a plasma flow along a much longer loop structure.

This appears to be a flow typical of the patterns of X-ray jets, on a very small scale and on closed fields. These have a standard interpretation in terms of flux transfer between compact and large-scale fields, but in many cases it now appears that this model is being supplanted by the alternative idea of a tiny filament eruption, which in this case (of applicable) would probably involve a confined eruption.

This has been a Nugget on recent news - less than a week old - illustrating that RHESSI still is making discoveries even though, at age 14, it may be older than most cats get to be. The importance of this discovery would be that flare-like episodes, complete with high temperatures and presumably dominated energetically by non-thermal particle acceleration, can occur in the un-ionized lower atmosphere of the Sun, rather than in the fully ionized corona. Neither RHESSI, nor Fermi, nor current radio techniques detected any direct signatures of non-thermal activity in this case, so far as we have found, but such a weak event would be virtually impossible to detect in view of sensitivity limits.

In the future focusing optics for hard X-rays (such as those of FOXSI) can greatly reduce the hard X-ray background count rates, and hence make it possible to detect a very few hard X-ray photons. This event suggests that many such non-thermal events would be detected with better instrumentation, and that these would help enormously in our understanding of how dynamo magnetic fields, emerging from the solar interior, can re-structure into the remarkable complexity of the low corona and the relative simplicity of the bipolar solar wind.

Note that this event is not a "nanoflare" in the sense of being a part of a large number of unresolved non-thermal events. It is a discrete object, well separated in space and in time from any similar thing, and as far as we can tell, it is a solar flare. It resembles the much more powerful "impulse response" event described in [1]. That remarkable flare had dimensions of only 3-4 arc sec; the VLA image suggested a very compact loop in that case as well.

Finally, we remark with pleasure about the sophistication of the solar observing resources available to us for this kind of study: the four satellites providing our data (our own RHESSI, Fermi, GOES, and SDO) all have achieved position accuracy at the arc-second level, and time registration at the one-second level, with no fiddling required.

Please take note of the icon for this Nugget, on the home page: this was the discovery image made by Brian Dennis, a spectrogram of RHESSI spectrum vs. time for a single detector, at the basic 4-sec sampling. This display maps RHESSI counting rate vs. spectrum on the Y-axis and time on the X-axis. The event, a short vertical line at lower left, visible 3-10 keV, is barely noticeable because it was so brief. Obviously better sensitivity and time resolution would help to see more of these small-scale, rapid events.

Retrieved from "https://sprg.ssl.berkeley.edu/~tohban/wiki/index.php/A_flare_in_the_deep_solar_atmosphere"
Category: Nugget
Facts about A flare in the deep solar atmosphereRDF feed