Large-scale coronal hard X-ray sources have drawn special attention in this era of RHESSI, particularly now with the arrival of microwave imaging spectroscopy. The traditional way of studying the hard X-rays from corona has been to arrange for the event to occur behind the Sun, so that the solar limb occults the bright footpoint source. This geometrical arrangement allows even a "Sun-as-a-star" (no imaging) instrument to isolate the coronal contributions.

The occultation technique long ago revealed a strikingly different morphology of coronal hard X-ray sources from the non-thermal properties of ordinary flares (Ref. [1]). The properties of some of these events include very flat hard X-ray spectra, smooth time variations, high altitudes (as inferred from the occultation geometry) and microwave spectra with characteristically low peak frequencies. These events commonly occur in conjunction with other coronal disturbances, such as CMEs, type II/IV radio events, and SEPs, all of which relate strongly to particle acceleration. Recently the pace of discovery in this area has sharply increased because of much-improved instrumentation, such as RHESSI hard X-ray/gamma-ray imaging, and especially the Fermi observations of "sustained" gamma-ray emission.

As a taste of the remarkable properties of these events, please see Figure 1, which shows the time variation of the hard X-ray and gamma-ray continuum spectrum as observed by the Konus/WIND instrument in SOL2014-09-01 (see the naming convention). The power-law spectral index remains remarkably constant at a suggestive slope. It is really exactly 2, and why would that ever happen? It would be fair to say that no simple model has yet been proposed for this. Note that we described Konus/WIND database in an earlier Nugget. 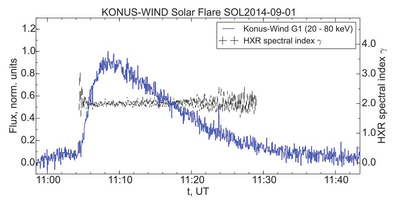 Figure 1: The remarkable lack of spectral variation during SOL2014-09-01, not the subject of this Nugget but an event that was well observed by RHESSI and which must be closely related to the one we describe here.

These events appear only rarely, observable a few times per year at a rate no doubt limited by the difficulty of the observations and their limited sensitivity even in the modern era. In this Nugget we describe an occulted event from two decades ago, which presents the difficult problem of "source confusion" as multiple flaring events were simultaneously observed on the Sun, and this question will greatly improve with true hard X-ray imaging observations become possible.

Figure 2 shows the time series from our "new" event, not really new but not previousy described in the terms we use here. 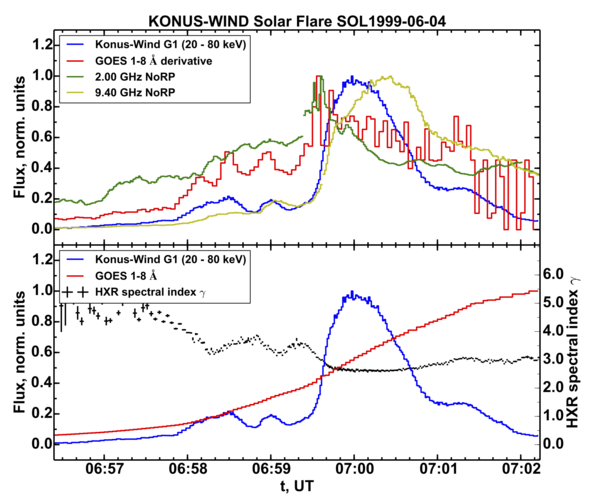 Figure 2: A time-series overview of SOL1999-06-05, as labeled. The GOES soft X-ray time derivative (red in the upper panel) shows the timing of the flare energization as measured by the growth of the coronal soft X-ray source (the Neupert effect). This derivative is artificially noisy after about 06:59:30 UT because of inadequate sampling in the original time series.

One can see a striking difference with the event in Figure 1, in that the hard X-ray spectrum is not quite so hard and not quite so invariant with time. On the other hand, the new event does give the impression of a slowly-varying component added to a rapid component. We would describe the variations prior to about 06:59:30 UT as "soft-hard-soft", the pattern invariably seen in impulsive flare emission. In these "normal" flares the spectral hardness tends strongly to peak at the time of peak hard X-ray emission. The slow component here would be a "soft-hard-harder" pattern, typically seen during major CME/SEP flares with coronal disturbances. The microwave time series (from the Nobeyama Radio Polarimeters) also has complexity suggesting some sort of combination.

This remarkable event could be localized well by the SSRT microwave array, which identified the confusing sources: the first one above the western solar limb and the second located on the disk. Thus these two characteristic patterns likely do not coincide spatially. The gradually varying hard X-ray component could be related with coronal source above the solar limb, while the component with soft-hard-soft spectral evolution probably was related with "ordinary" on-disk flare. 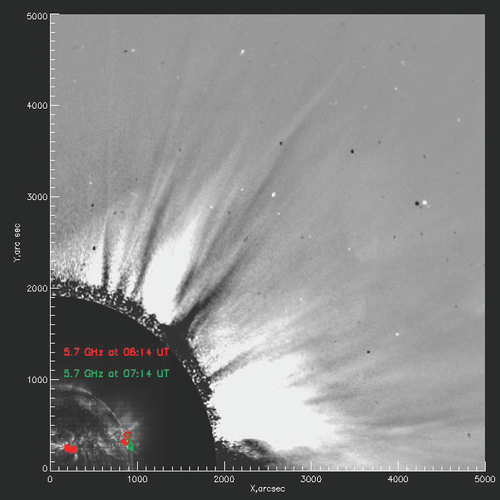 Figure 3: Images showing the limb event (green contours from SSRT microwave imaging (Ref. [2]) and LASCO CME structure in the corona; red contours showing another active region on the disk of the Sun, responsible for the M-class flare SOL1999-06-05T07:03.

Note that the GOES soft X-ray data also are Sun-as-a-star, so it seems likely that this event's classification as M3.7 may mix up the two events. The SSRT microwave imaging distinguishes them (Ref. [2]).

We report a probable occulted event in 1999 that had gone un-noticed previously, and could identify it spatially with SSRT as well as characterize its hard X-ray spectral evolution with Konus/WIND. It may be difficult to do much quantitative analysis on this particular event because of source confusion and the lack of RHESSI or even Yohkoh hard X-ray imaging, but this event adds one more case to the limited catalog of occulted solar hard X-ray coronal events.

[2] "The Siberian Solar Radio Telescope: the current state of the instrument, observations, and data"

The authors acknowledge the team of the Ondřejov radiospectrograph in the Czech Republic (ORSC/Ondřejov) for providing microwave data for this event.