We are accustomed to thinking of white-light flares - those detectable to the (protected) naked eye - as the most spectacularly energetic of all flares. That is how Carrington discovered flares in 1859, after all. It is generally true that a flare has to be energetic on the scale of Carrington's original one for naked-eye detection, but with sensitive instrumentation one can readily detect weaker events. This Nugget describes a flare at GOES class C6.2 - weak - that produced a clearly detectable signature in the TRACE white-light channel, as well as in one each of its UV and an EUV channels. This combination of observations lets us describe the broad-band continuum spectrum, or the spectral energy distribution as the astronomers quaintly refer to it.

The event was weak, but was from the same active region that later produced the Halloween flares, so it was noteworthy in that respect. Although it was weak in soft X-rays, the most common index defining the energy of a flare, it was relative bright in microwaves (360 SFU at 15.4 GHz, according to the RSTN network); one SFU is a unit of spectral energy flux: 10-22 W/m2Hz. One will get an idea of how sensitive these radio observations are by thinking about this number in the context of, say, room illumination via a 100-W light bulb. 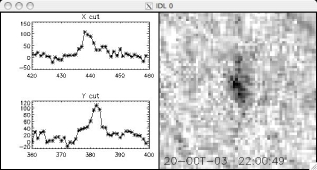 Figure 1:' The TRACE white-light exposure at the impulsive phase of the C6.2 flare of October 20, 2003. The left panel shows X and Y cuts through the brightest point of the image (right), which is in a reversed color table.

Figure 1 shows a white-light image from TRACE at the peak of the flare. It is not very impressive, so the line plots at the left are there to give a feeling for how clear the detection really is. One sees a lot of noise in this difference image, but a clear black blob (reversed color table) with a significance of more than 10 sigma. The UV and EUV data (Figure 2) are much clearer, because the solar photosphere is so much fainter at those short wavelengths. 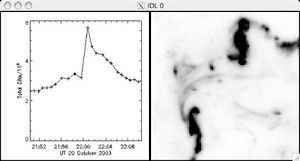 Figure 2: The 1600A observations of the flare. The time series at the left shows the UV flux integrated over the image area, and the image at the right shows what it looked like at the peak.

Note that the time series (left panel of Figure 2) has a sharp peak; this is because the UV (and white light) emission is so concentrated at the onset of the flare. Also note that the image looks saturated at its brighter parts, the loop footpoints (the loops are faint but clearly recognizable). This is a common problem for photometry on such images, since their exposure times may not keep up with the rapid and highly variable changes at short wavelengths. For white light this is not such a problem since the maximum contrast (flare vs quiet photosphere) is normally fairly small. The white-light image (Figure 1) shows one of the footpoints; for unclear reasons both were not so easily detectable.

We can take these observations and plot a crude spectral energy distribution for the impulsive phase of the flare, defined as the peak time of the RHESSI hard X-ray event. We do not show the RHESSI data here because we haven't really analyzed them yet, but please check out the RHESSI quicklook timeseries and images. These may require a lot of explanation, but there are other Nuggets with some of it. The main point is that the two RHESSI quicklook images - even though at low resolution - basically confirm the picture we get from the UV images of Figure 2, in that there are footpoint sources and a dominant loop connecting them.

This "spectrum" from TRACE only has three points, one each for white light (about 5000A), 1600A, and 171A. We must pretend that they are an actual spectrum, which would really be littered with emission lines and other complicated features. Three points is far from being enough, unless the basic emission is actually a simple continuum. Figure 3 shows this spectrum along with an ad hoc model. In showing the spectrum one has several choices of units. Figure 3 shows the energy distribution in the form νfν, which equals λfλ and whose integral is just the energy flux. From this figure it is easy to see that by far most of the energy radiated is at visible/UV wavelengths, assuming that we can represent the spectrum as a continuum. 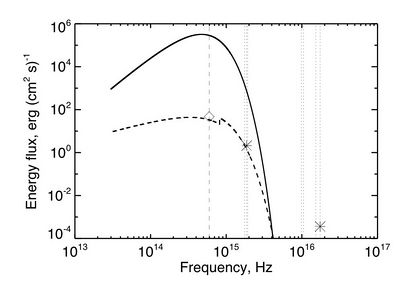 Figure 3: The energy distribution derived from the TRACE images for the impulsive phase of the flare. This is very crude. It represents the photosphere as a blackbody (the solid line), and the flare as a slightly hotter but optically-thin source. This works for 1600A (the left asterisk) but not the EUV point at 171A (the right asterisk). Most of the flare energy is in the low-temperature continuum.

The analysis of this weak white-light flare confirms our basic idea, namely that the energetically dominant radiation from a solar flare comes from chromospheric material at a slightly elevated temperature. This would certainly be OK with an optically thick blackbody flare spectrum, which we could think of as photospheric, but it is also true of the optically thin spectrum shown in Figure 3. Here too a temperature not even twice that of the quiet photosphere provides plenty of luminosity. The X-ray and radio observations, though absolutely needed for understanding the physics of a flare, contain negligible energy.