Million-degree plasma in the solar corona is usually very tenuous. During a flare, however, very high temperature and density loops are formed in a matter of seconds. The standard explanation is that the release of energy in the corona coupled with energy transport mechanisms (such as thermal conduction and accelerated particles) leads to the evaporation of cool, dense material from the lower layers of the solar atmosphere. Understanding this process in detail has proven to be very challenging.

Surprisingly, the relative abundance of minor ions turns out to be a useful way to track the flow of plasma in the solar atmosphere. In the corona one often finds that the relative abundance of elements with a low first ionization potential or FIP (Fe, Si, and Mg have a FIP of 10 eV or less, for example) are enriched relative to elements with a high FIP (C, N, O, He, and Ne, for example). In some regions, such as in the outflows observed in polar coronal holes or in transient brightenings at transition region temperatures, this enrichment is absent. One idea is that the process occurs in the chromosphere where the low FIP elements are ionized and the high FIP elements are neutral. Martin Laming has suggested that the pondermotive force, which results from waves propagating in a non-uniform electromagnetic field, is responsible. In his model (Ref. [1]) changes in composition build up only slowly, so that transient phenomenon such as flares should show a photospheric composition.

The EUV Variability Experiment (EVE) on the Solar Dynamics Observatory (SDO) satellite observes the sun at a high cadence (10s) with some spectral resolution (0.1 nm). Its observations between 6 and 25 nm are particularly useful for studying flares. This wavelength range contains emission lines from every ionization stage of Fe from VIII to XXIV. This covers the temperature range from below 1 MK to about 20 MK. Because EVE does not have any spatial resolution the evolution of the lower temperature lines is often difficult to separate from the background corona and the highest temperature emission lines (from Fe XV-XXIV) are the most useful.

EVE also observes continuum emission from free-free thermal bremsstrahlung (Ref. [2]) in addition to the emission from highly ionized Fe. Since the bremsstrahlung is predominately from hydrogen, EVE observations provide an opportunity to measure the abundance of Fe relative to H during a flare. One difficult aspect of this measurement is the insensitivity of the bremsstrahlung at EUV wavelengths to temperature (see, for example, Section 2 of Ref. [3]; we need to have a relatively good understanding of the temperature distribution in the emitting plasma to model the continuum.

As shown below, it is possible to fit the spectrum by simultaneously determining the distribution of plasma temperatures and the FIP enrichment factor or FIP bias (the ratio of the abundance of low FIP lines to their photospheric values, a FIP bias of 1 corresponds to a photospheric composition). The application of this analysis to the 20 or so largest flares observed with EVE yields an enrichment of 1.17±0.22. This suggests that the bulk of the flare plasma generally has a photospheric composition (see Ref. [4] for details). 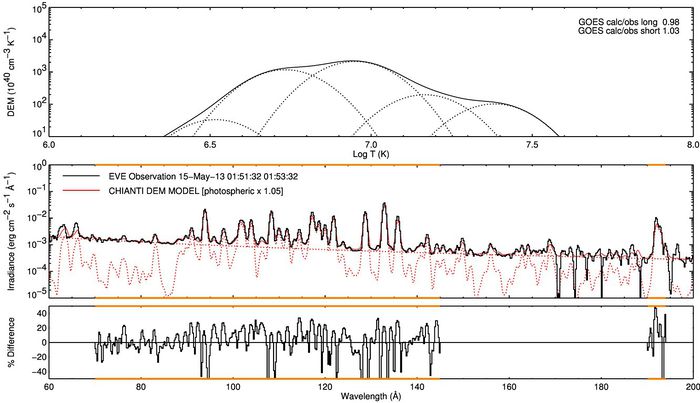 Fig. 1: Measuring the composition of flare plasma with EVE observations. The temperature distribution (top panel) and the FIP bias are determined simultaneously by fitting model CHIANTI spectra to the observations. Here the FIP bias is 1.05, indicating that the plasma is close to photospheric in composition. In the middle panel the black line is the EVE observation for this time and the red line is the model spectrum. The contributions of the continuum and the line emission to the model spectrum (dotted red lines) are also shown.

How RHESSI Can Help

EVE has an impressive temperature coverage, but it's not complete. To make the temperature measurements better behaved at the highest temperatures we need constraints from emission formed at temperatures above Fe XXIV. One way to do this is to add the GOES soft X-ray fluxes into the calculation. This was done for the example shown above. Since the GOES soft X-ray fluxes cover relatively broad wavelength ranges, they have a relatively broad temperature dependance and this is still not optimal. The ideal approach is to combine EVE with RHESSI, which has much higher energy discrimination than GOES, to study flares. Amir Caspi, Jim McTiernan, and Harry Warren have been working on this and some initial results will be reported on in an upcoming RHESSI nugget. Dan Ryan and collaborators have also been looking at this problem recently.

The combined EVE and RHESSI analysis should help to reconcile these composition measurements with the many previous efforts that have often found somewhat different results. Phillips & Dennis (Ref. [5]), for example, found an enrichment of Fe of about 2.6 in the analysis of RHESSI data alone. One possibility is the very highest temperature plasma in a flare is formed somewhat differently than the bulk of the flare plasma. The analysis of combined EVE and RHESSI data promises to be a very fruitful new way to investigate flares.

[1] "Non-WKB Models of the First Ionization Potential Effect: Implications for Solar Coronal Heating and the Coronal Helium and Neon Abundances"