How much energy is released in a solar flare? Which fractions of this energy are converted into accelerated particles and hot plasma, respectively? RHESSI covers a large part of the thermal and nonthermal X-ray spectrum, key to learning accurately about this energy partition. While RHESSI observations have considerably improved our understanding of flare energetics, they have a limitation. Due to the typically steep power-law shape of the accelerated electron spectrum, the total energy is dominated the by lower-energy electrons, whose signatures are found at photon energies for which the interpretation of the spectrum can be ambiguous and/or to which RHESSI is not sensitive (for a review, see Ref. [1]). One way to overcome this, is to include data from SDO/AIA. This way, the lower energies are much better constrained. We used this method to analyze the pre-impulsive phase of the well-known event SOL2012-07-19T05:58. From about 40 minutes up to 25 minutes before the impulsive phase, two X-ray sources could be imaged, one below and one above what was interpreted as the magnetic reconnection region.

The idea of this method [2] is that any mean electron flux distribution can be described via a differential emission measure (DEM). And any observed count spectrum can be forward-fitted with such a model. Hence, RHESSI and AIA data are combined into one dataset and a single temperature response matrix is computed. This combined data set is then forward-fitted with a model DEM. Figure 1 illustrates this method schematically. Note that the chosen model is not any arbitrary DEM, but it in fact represents a κ distribution. 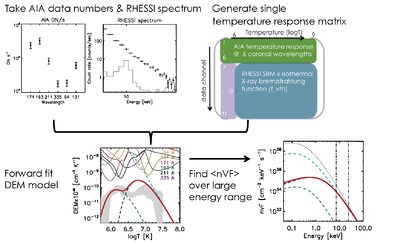 Figure 1: Illustration of the method of simultaneous RHESSI and AIA data fitting. In this case [3], two components (dark blue and green), one dominated by low-temperature emission from the corona and one dominated by flare emission, were fitted.

This event presented something rarely seen with RHESSI: two HXR sources in the corona, one below (Source B) and one above (Source A) the presumed magnetic reconnection site. Both sources could be imaged over ~15 minutes during the pre-impulsive phase of the event, as shown in Figure 2. Using the method described above we analyzed the time evolution of the electron spectrum in both sources. The time evolution of the mean electron flux spectra turns out to have been quite different for the two sources. The spectrum of the source below the reconnection region rises over the whole energy range, but it spectral index remains about constant, while the spectrum of the source above the reconnection region becomes harder. This suggests density increase, possibly due to evaporated chromospheric plasma, in source B, while in source A more and more electrons are accelerated to progressively higher energies. 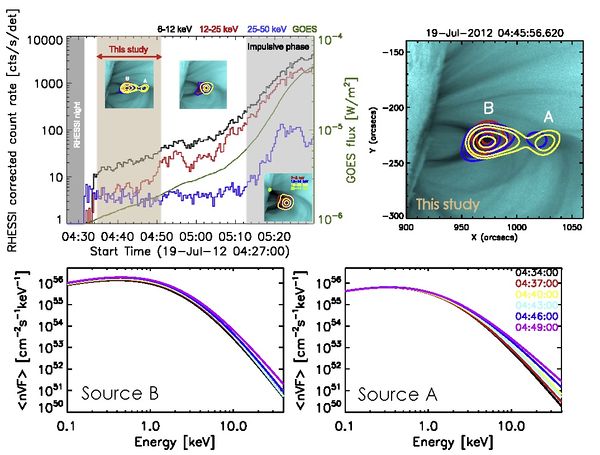 Figure 2: Overview of the event. On the top left, GOES and RHESSI lightcurves are shown and the analyzed time interval is indicated. An AIA 131 Â image it presented to the right with RHESSI contours (red: 7-8 keV, blue: 13-14 keV, yellow: 16-20 keV, green: 38-44 keV) overlaid. The bottom row shows the time evolution of the mean electron flux spectrum.

All the energy that is released from the magnetic field needs to reappear somewhere else. Two mechanisms dominate in the conditions (temperature, density) present during this flare: thermal conduction and free-streaming electrons. We calculate the energy loss due to conduction and due to free-streaming electrons as a function of time for both sources, as shown in Figure 3. Two findings are noteworthy:

1) The bulk of the energy is carried by non-thermal electrons, even at this early stage of the flare.

2) The total energy losses are comparable to energies reported for the main phase of several flares as shown in the figure.

Figure 3: Energy losses due to thermal conduction (red) and free-streaming electrons (blue) in source B (left) and source A(right). At the center, values from Ref. [4], where red and blue stands for thermal conduction and non-thermal power, respectively, and Ref. [5] (only conduction) are shown.

We show that considerable electron energization takes place in magnetic reconnection outflow regions up to 40 minutes before the peak of a solar flare. The spectrum of accelerated electrons in the magnetic reconnection outflows is consistent with a kappa distribution having a power-law tail spectral index between −5 and −6 above 2 keV. The observations also show efficient heating of the reconnection outflows to temperatures of 6–8 MK, suggesting that successful flare acceleration models should account for both heating and the formation of power-law tails. Both sources show time evolution at scales longer than the energy loss suggesting quasi-stationary energy release. The dominant means of energy loss out of the source regions is by free-streaming, lower-energy electrons. This not only implies that considerable electron acceleration can take place in flare phases other than the main, impulsive, phase, but also demonstrates the importance that the pre-impulsive phase may play in overall flare energetics.

For details on this work, check out the forthcoming ApJ publication [6].