The RHESSI field of vew covers the whole Sun all the time, but its images can only extend to a few arc min (nominal FWHM about 3 arc min) (see a previous Nugget or the actual specifications for details). This means that very large-scale features, such as those noted recently in SDO/AIA observations (e.g., Ref. [1]), may at first glance have eluded discovery. We report here an analysis of large-scale variations that suggest the common occurrence of flares with an antipodal orientation, ie at opposite ends of a solar diameter. These events may have escaped earlier notice because of the uniqueness of our vantage point at Earth, prior to the advent of STEREO. RHESSI of course can only see such events at the exact limb, as illustrated Figure 1, since otherwise an antipodal flare counterpart would be occulted, and hence not be readily observable. 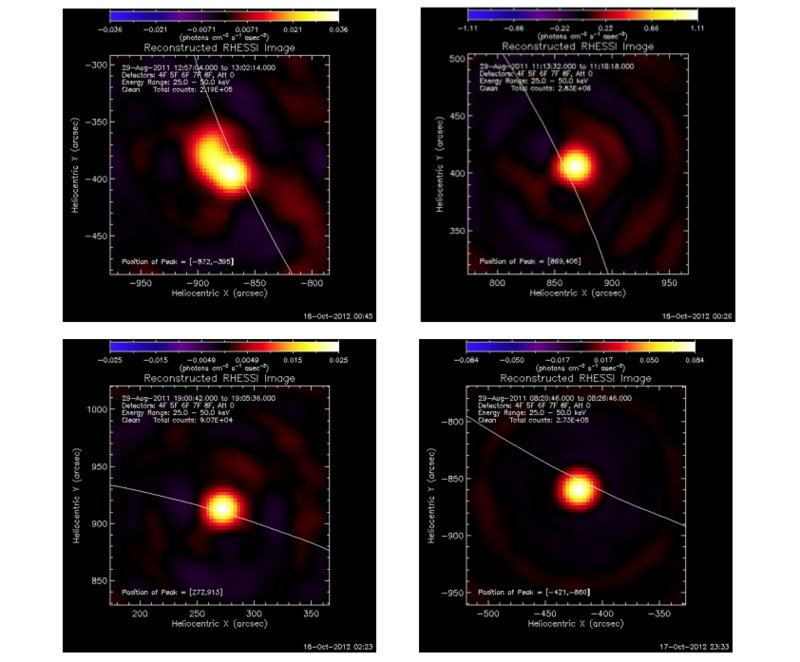 In Figure 1, the arc of the limb gives a rough idea of the flare location in azimuth around the limb. The existence of polar antipodal flares (lower row) was an unexpected result of the search described here.

The near-simultaneous occurence of these antipodal pairs of events implies a causal connection, via Occam's Razor, in the body of the Sun - rather than in its tenuous corona. If so the best-known such link is the excitation of interior acoustic waves, first observed in 1997, but having been predicted by C. Wolff long before that time (Ref. [2]). Figure 2 (left) illustrates how the interior of the Sun refracts acoustic waves, allowing their propagation between opposite hemispheres. Because of the high temperature of the solar interior, the wave propagation time is only some tens of minutes.

Figure 2: Left, interior propagation of acoustic waves launched by a solar flare, at the point labeled "Far-side activity" (from D. Braun). Right, sketch showing in detail how a small mass exchanges energy and momentum in a collision with a much larger mass.

Prior to these RHESSI results, it had not been realized that the antipodal focusing of waves induced by a flare at one point, could in fact trigger a comparably large energy release at the antipode. Note that in Figure 2 (left) the waves clearly disperse and do not focus intensely near a point, where one could imagine the triggering of energy release in a unstable region could occur.

Another problem with the known properties of the flare-induced seismic waves is the mere fact of their existence in the first place. An apt analogy of a coronal disturbance and a photospheric response might be found in the thought-experiment of bouncing a table-tennis ball off of a bowling ball (see sketch in Figure 2, right panel). In such a collision between disparate masses, the requirement for conservation of momentum dictates that very little energy be coupled. The mass ratio of a flare and the Sun may be of order 10-19, and yet the observed energy in flare seismic waves may be of order 10-3 (e.g., ref. [3]) of the flare total!

Something more is needed, and the RHESSI signatures noted above may well provide the necessary clue.

We believe that RHESSI's observations of hard photons in antipodal flares, as illustrated above, points to a solution to this problem: a heretofore-unrecognized and weakly-interacting particle, created during the flare gamma-ray energy release, could serve to concentrate and transport the momentum associated with the flare eruption through the solar interior as a focused beam, enabling a resonance with the chance unstable region at the antipodal location. We tentatively call this new particle the heliogammonion, noting the earlier discovery of helium itself in the Sun. The properties of the new heliogammonium particle remain to be elucidated, along with those of many other exotic new particles that have been proposed in the world of particle physics (see our earlier axion Nugget).

The heliogammonium emission at the flare site would have the property of aggregating the momentum involved in a flare eruption; a collective plasma effect would then allow the heliogammonium beam to burrow through the core of the Sun, much as the electron beam of the standard thick-target model propagates from the corona to the chromosphere.

RHESSI observations of antipodal flares have provided the first evidence for another of the elusive weakly-interacting particles of modern astroparticle physics, which we have dubbed heliogammonium. Although it is speculative at present, it seems entirely reasonable that astrophysical jets originating possibly in black holes or other compact objects, abundant in the distant universe, may copiously produce heliogammonium beams (or, more properly, thick-target interactions of collective heliogammonion storms). These would solve the collimation problem for these extraordinarily elongated celestial objects. This would not be the first time that a solar discovery has led to a deeper understanding in in broader fields of astrophysics, since we can also point with pride to magnetic reconnection, to cite only one other well-known example...april fools :)

If you've read this far, with great fascination, please note the publishing date of April 1. These flare positions were all artifacts of not-quite-perfect stellar references; the software has improved and the Browser images may have greatly improved by now.