Solar flares are explosive phenomena visible in all regions of the solar atmosphere, and were originally discovered by Carrington (reference 1) via emission in white light. Since then, many other manifestations of flares have been discovered in the outer atmosphere and heliosphere, including signatures of acoustic waves penetrating deep into the solar interior. According to the general consensus such a phenomenon corresponds to the sudden release of energy stored in the corona following a slow buildup of excess magnetic energy, which ultimately originated via dynamo action within the convective envelope. Many of the mechanisms remain ill-understood, including the nature of the initial plasma instability that sets the flare off. The detection in white light immediately implies a large concentration of the released energy in the lower atmosphere.

With the newly-launched Solar Dynamics Observatory (SDO) we now have new tools to study the important phenomenon of the white-light flare. Much to our surprise, though, the first gamma-ray flare of the SDO era turned out to be a negative flare! This event was SOL2010-06-12T00:57, naming it unambiguously by the new IAU convention. Such a phenomenon is known for other stars but had never been credibly reported for the Sun. Theories have been waiting in the wings for such an observation, so we were very pleased to find it well-observed by many spacecraft and ground-based observatories, the only downside being that RHESSI could only observe photometrically, not as an imager, because observations of the Crab Nebula required pointing away from Sun center.

The flare studied was a GOES M2.0 event in [NOAA active region11081], located approximately at N22W45, and Figure 1 shows difference images that display the precursor darkening and the white-light emission. This flare had a remarkably impulsive hard X-ray light curve, with a duration (half maximum at 50 keV) of only about 25 s and γ-ray emission, unusual for such a weak event. Figure 2 brings together some of the time-series information, comparing HMI intensity and Doppler observations with RHESSI hard X-ray fluxes. The third panel from the top shows the sudden diminution of the continuum in each of the two emission regions; this amounts to only about 3% of the preflare flux, but the excursion significantly exceeds the scatter of the preflare integrations. The hard X-ray signature matches the HMI intervals of the continuum increase (the white-light flare) and does not extend earlier into the HMI precursor integration. 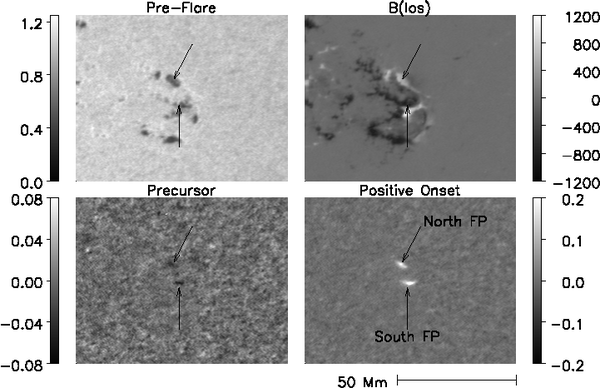 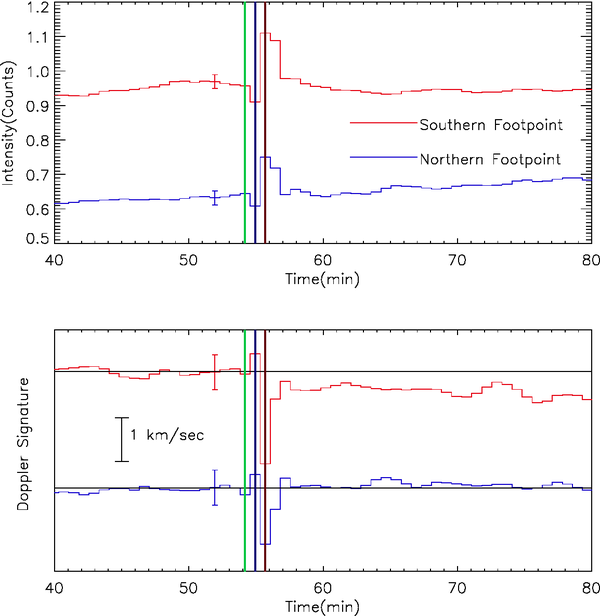 Although the "black light flare" signature is a bit hard to see on the images (Figure 1), it is definitely significant (Figure 2). Now, one question arises, is this diminishment a real observation or just a crazy and funny joke from SDO?

Generally a dimming signature might imply (a) momentary obscuration by overlying material; (b) thermal perturbations causing an increased opacity in the relatively cool chromosphere, hence increased absorption of radiation from the hot underlying photosphere; or (c) a non-thermal effect not accessible to standard modeling techniques but with a similar effect. We believe that (a) can immediately be ruled out, since the intensity diminutions coincide well with the subsequent emission regions. An external absorber is a reasonable explanation for some diminution events seen in stellar flares or solar microwave events.

Explanation (c) has been worked out in some detail by Jean-Claude Hénoux and colleagues (reference 2) within the context of the thick-target model of flare hard X-ray emission.. This interesting theory suggests a diminution in the visible continuum related to opacity variation: roughly speaking, an increase of the ionization in a cool atmospheric layer - if it did not correspond to heating as well - could absorb photospheric emission and replace it (perhaps partially) with an intensity corresponding to the local temperature. For a standard solar model atmosphere, the temperature at a height of 800 km above the photosphere is about 3900 K, so that the Planck function at 6173 A (the HMI wavelength) would be less than half that of the photosphere.

But in fact none of these physical explanations are the correct interpretation. In our case the answer is far simpler. The HMI Dopplergrams and intensities used for standard helioseismic applications of the data consist of a spatial-temporal interpolation, using 12 ﬁltergrams at six diﬀerent wavelengths and two polarization states, for each observable. These interpolations, in conjunction with the scanning of the 6173 A Fe i line, were devised to minimize the eﬀects of aliasing (unwanted time-series noise) in p -mode signals. The standard interpolation for this purpose includes contributions from 135 seconds before and after the time assigned to a Dopplergram, with coeﬃcients that are negative in the ranges ±45 – 90 seconds. Because of this, the response of the standard Dopplergrams to a suﬃciently rapid white-light ﬂare can be an apparent reduction in intensity preceding the ﬂare, i.e., an apparent “black-light ﬂare” preceding the white-light. Thus what both figures show is an artifact. We have further analyzed this flare, taking the interpolation properly into account, and the results are in reference 3.

[1] Description of a Singular Appearance Seen In the Sun on September 1st, 1859